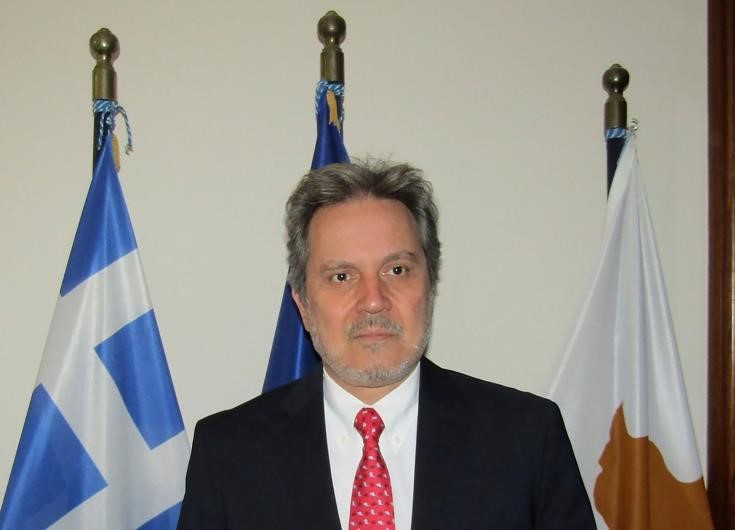 Athens and Nicosia are walking in the same path together during this time of crisis, and by handling decisively and overcoming the coronavirus, they are building up trust for the period looming ahead in the international community, says the Ambassador of Greece to Cyprus, Theocharis Lalacos.

Greece stands out internationally as an example for successfully handling the pandemic, the Ambassador goes on, and says that together with Cyprus, the two countries are highlighting the importance of responding timely and in a responsible manner for the sake of common good.

Speaking to Cyprus News Agency ahead of Orthodox Easter celebrations, the Ambassador notes that both Greece and Cyprus emerge internationally as countries who promote positive action and a commitment to international law. Referring to the Cyprus problem, the Ambassador says that this is a problem caused primarily by the illegal invasion and ongoing occupation by Turkey. Provocative and dangerous behaviors of states have no place in today’s globalized world, he adds.

This Easter is different, as COVID-19 and efforts to contain its spread have led to unprecedented conditions for humankind, the Ambassador notes. He points to the season’s message, saying that faith, a sense of responsibility, love and respect for fellow human beings, all prevail over death and lead to the miracle of the Resurrection of Christ.

Amid difficult times, this season is “an opportunity to reflect, communicate truly with our family, pray, readjust our priorities and summon our forces for a better tomorrow” says Ambassador Lalacos.

All people in Greece and Cyprus are part of this great effort to contain the spread of coronavirus in order to return to their daily routines the soonest possible, he goes on.

He notes that Greece emerged with dynamism, optimism and determination after a multiannual and multifaceted crisis, and says that the country is now hailed around the world as a successful example for the handling the pandemic, owing to coordinated government policy and the responsible stance of the majority of its people.

From the very beginning, governments in Greece and Cyprus cooperated and displayed solidarity, the Ambassador says, adding that Nicosia is also fighting this battle in a consistent and responsible manner, in order to limit the impact of the virus. “Athens and Nicosia are in contact and support each other, they are coordinating with the rest of the European family and show in deed the importance of implementing timely and responsible policies, in favor of the collective good and for the structured rebuilding in the near future” the Ambassador adds.

Moreover, Ambassador Lalacos notes that Greece and Cyprus work systematically in shaping the broader Eastern Mediterranean region into an area of peaceful coexistence, stability and prosperity, while taking actively part in regional and international cooperation initiatives. “Through this stance, Greece and Cyprus emerge in the global community as examples of positive action, committed to international law and the principles of collective security” he says.

Despite these efforts, the Cyprus issue remains unresolved, the Ambassador observes and says that there is still no justice after so many years. “Provocative and dangerous behaviors of states have no place in today’s globalized world” he says and highlights the need for responsibility and for showing respect towards others, as the means for collective survival and for healthy coexistence.

Cyprus has been divided since 1974, when Turkish troops invaded and occupied 37% of its territory.