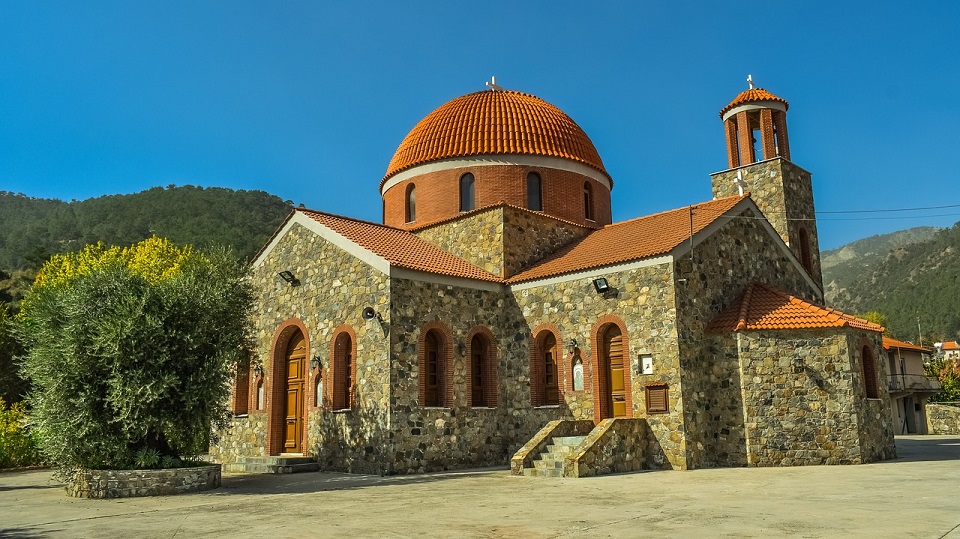 Cyprus has a large number of Byzantine churches and monuments of enormous historical, cultural, artistic and religious value. Ten of these monuments are included in the UNESCO churches world heritage list.

The ten churches are located in the Troodos Mountain and are frescoed churches that preserve to this day extraordinary samples of various streams and trends of Byzantine and post-Byzantine monumental paintings from the 11th to the 19th century. 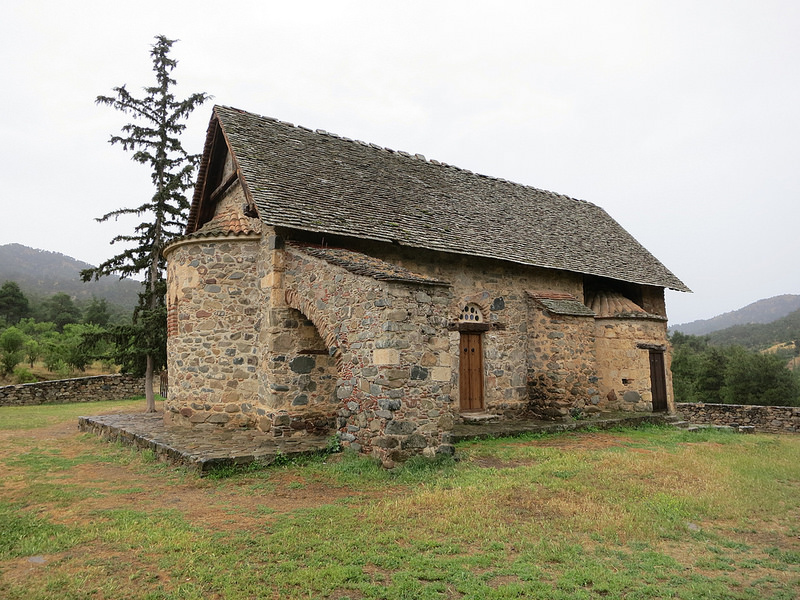 The church of Panagia Asinou also known as Panagia Phorbiotissa, is located at the north side of Troodos mountain range.

The church is built around 1105-1106 according to an inscription, located above the southern entrance of the temple, which also states that the founder of the Monastery was the magistrate Nikephoros the Great, who later became monk Nikolaos.

Panagia of Asinou is one of the ten UNESCO monuments located in Cyprus. 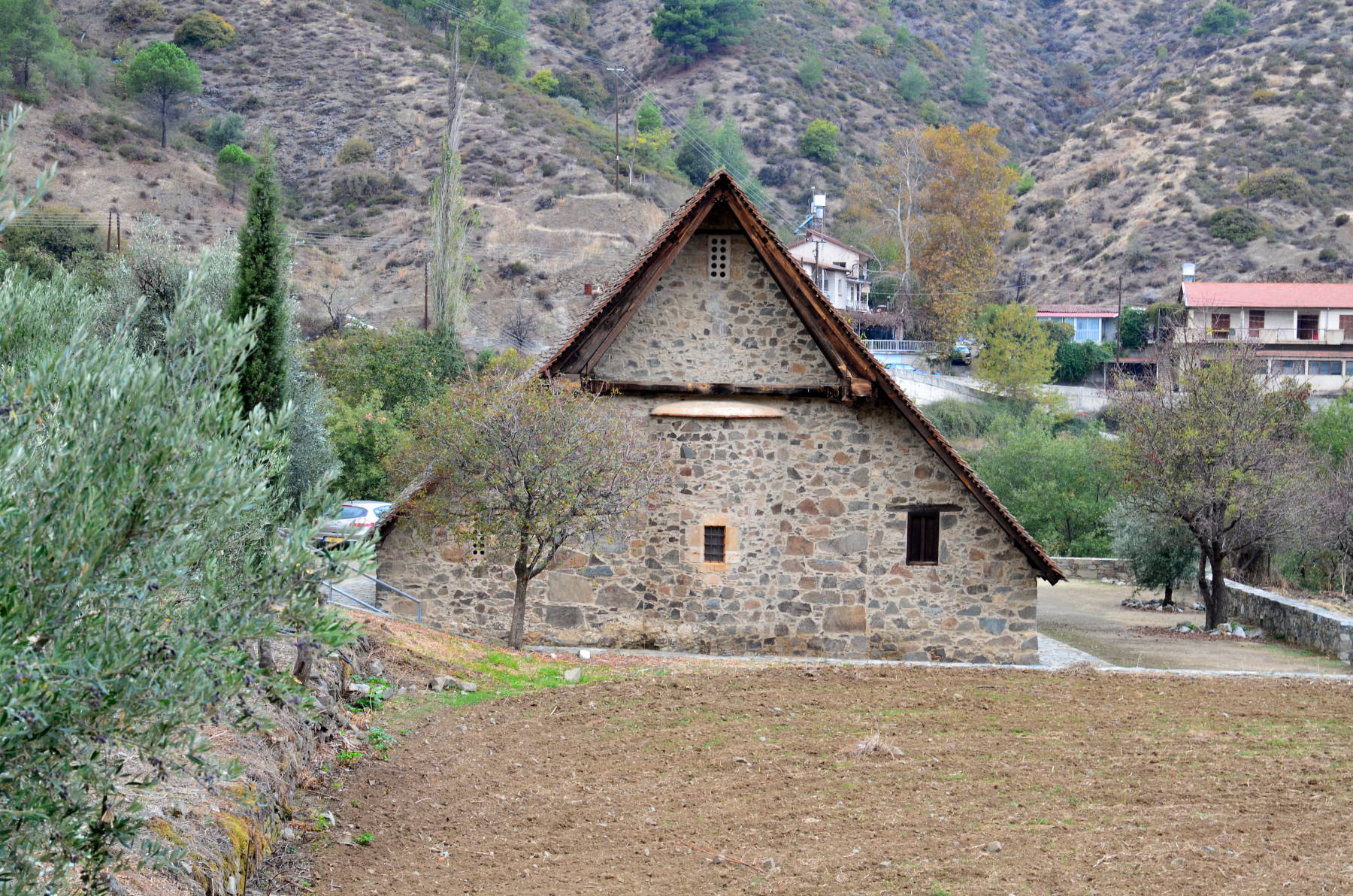 The church of Panagia Podithou is located in a central area of ​​the Troodos mountain range, in the northern part of the Solea valley.

This historic church was built in the valley of the Clarion River north of the picturesque village of Galata. In 1985, it was included in the list of UNESCO monuments along with other nine Byzantine churches of the Troodos mountain range.

(For information regarding opening hours please ask for the custodian at the coffee-shop of the village ). 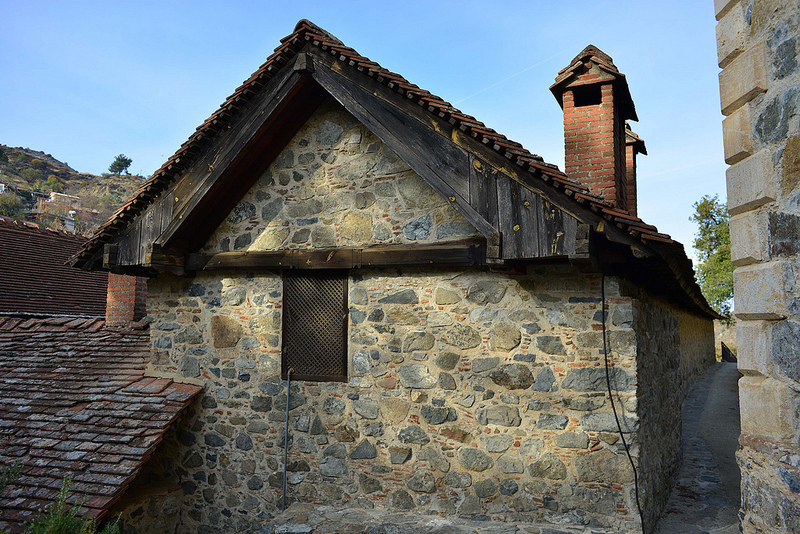 The monastery of Saint John Lampadistis is located at the central area of ​​the mountain Troodos, in the valley of Marathasa. The monastery is built east of the River Setrachos, near the village of Kalopanagiotis, famous for its beautiful cherry trees.

It has been included in the international list of UNESCO monuments since 1985 while it is still not clear when exactly it was built.

The church is open to visitors until 19:00 during summer season. 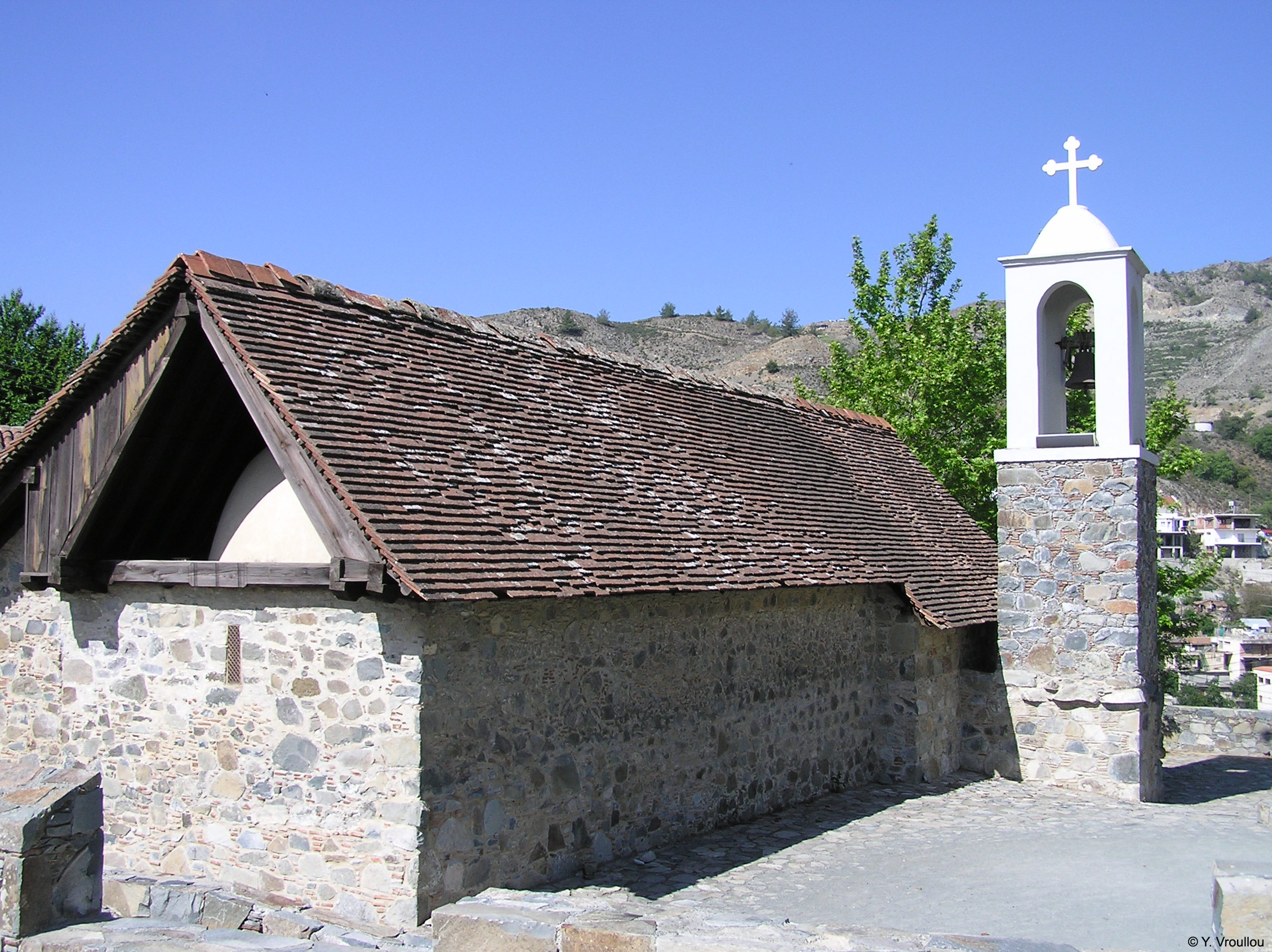 The Metamorfosis of the Savior church is built on the eastern side of the Troodos mountain range, on the top of a hillside of the village Paleochori.

The building of the church dates back to the beginning of the 16th century and since 2000 it has been included in the UNESCO List of World Heritage monuments.

Upon advance settlement you can visit the afternoons and the weekends. 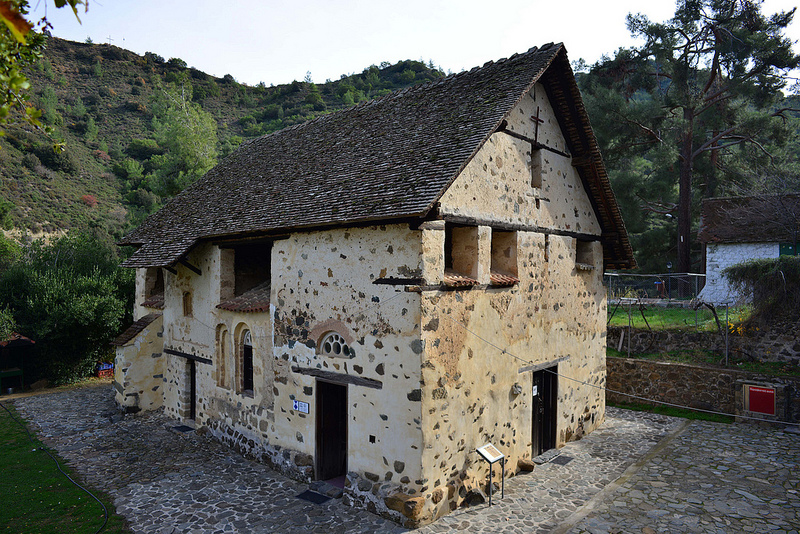 The church of St. Nicholas Stegis is built in a central area of ​​the Troodos mountain range, north of the Solea’s valley, west of the river Clarion.

It is located about 2 kilometers from the village of Kakopetria. It has been on the list of UNESCO monuments since 1985. 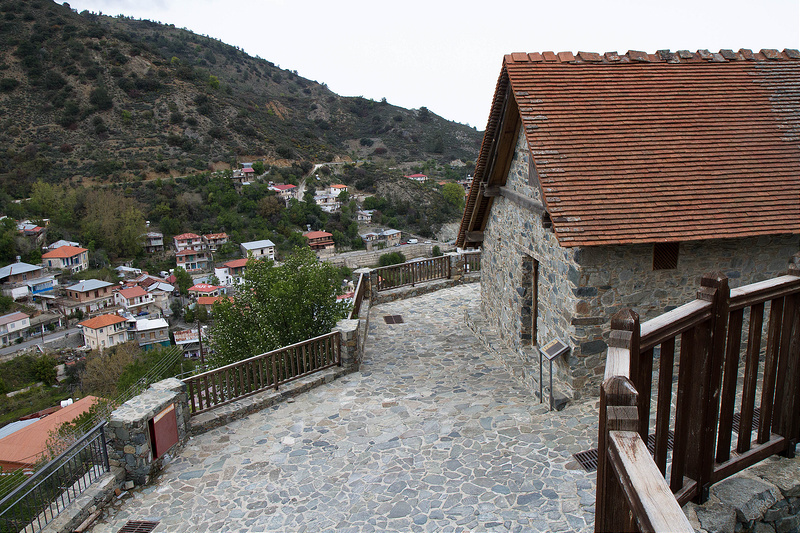 The chapel of Panagia Moutoulla is built in the valley of Marathasa, in a hill just above the village of Moutoullas.

It has been included in UNESCO’s list since 1985 together with another 9 Byzantine monuments.

According to an inscription found in the temple, the frescoes and wall painting of the church was made after the contribution of John of Moutoulla and his woman Irene.  They are presented in an icon holding a pattern of the church.

It is possible that this little chapel was a private chapel. 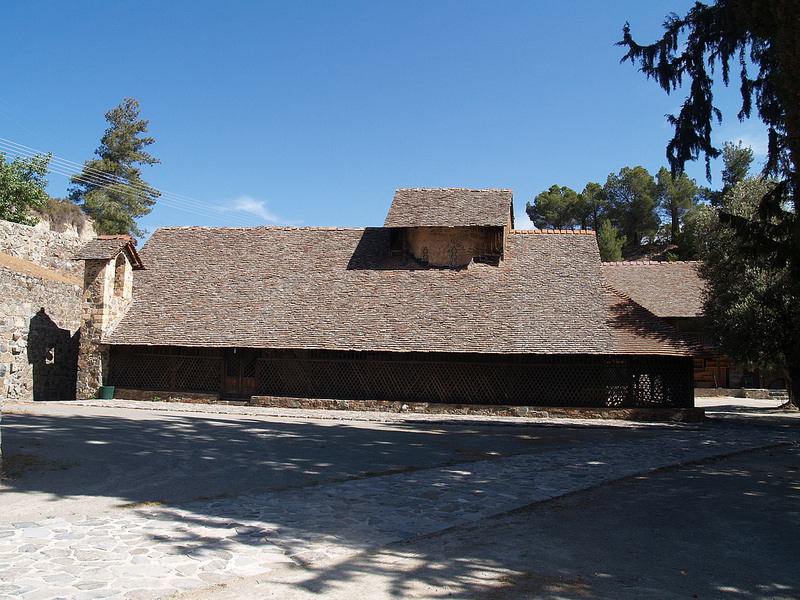 Panagia tou Araka church is located in the heart of Troodos at Pitsilia area between villages Lagoudera and Saranti.

Its been included in UNESCO world heritage list, since 1985.

The church is an one-aisled temple with a trullo while its roof forms a cross from the outside. During the 18th century, the western wall was demolished and the temple was expanded.

For opening hours please ask please ask for the priest who lives next to the church. 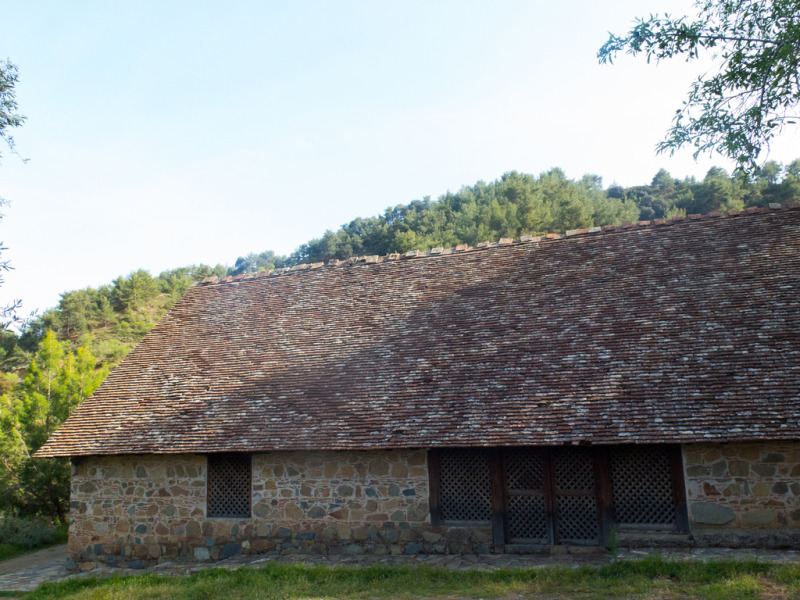 Agiasmati is located at the east part of the Troodos mountain range in the wider area of Pitsilia, at Platanistasa village.

It has been on UNESCO’s world heritage list since 1985.

It is a one-aisle wooden-roofed temple, covered with flat, tiled roofs.

The church is a catholicon of a homonymous monastery that built by the end of 15th century.

For information regarding opening hours please ask for the custodian at the village coffee-shop. 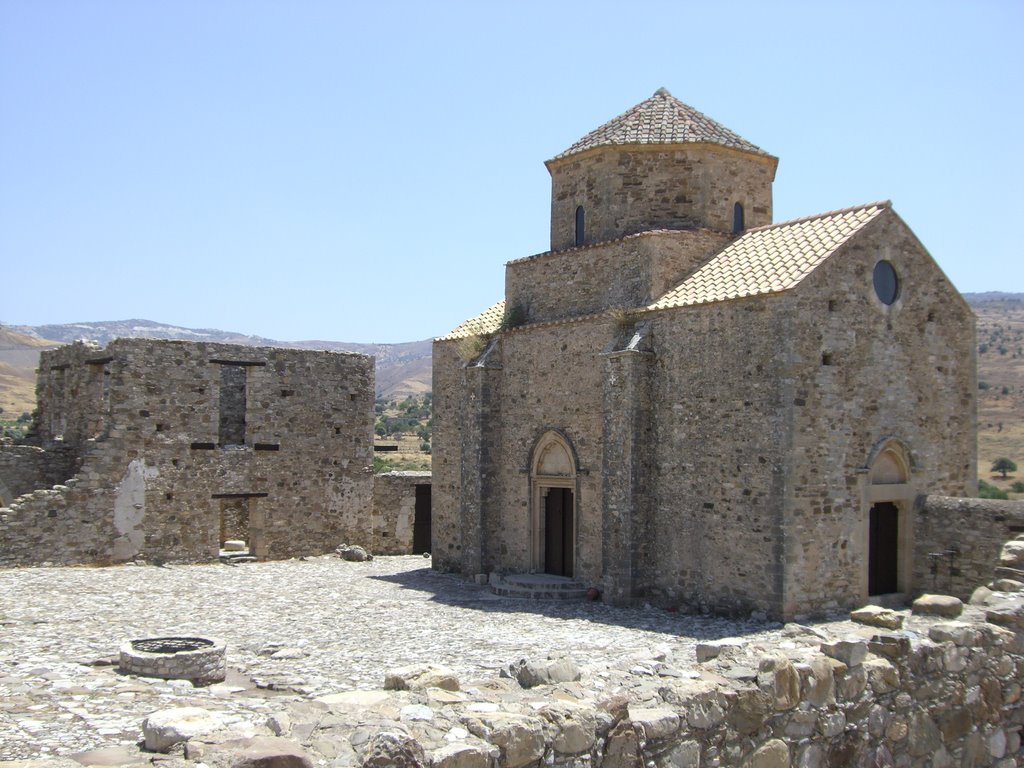 The monastery of Panagia Sinti is located 3 km south-east of the village of Pentalia, in the province of Paphos. It is built on the west bank of Xeropotamos.

The historical sources for the foundation of the monastery are minimal. It is estimated, that it was built around the 16th century and is considered to be one of the most important buildings of the Venetian period in Cyprus.
In the early 1950’s, the estate of the monastery was sold to residents of neighboring areas, while the courtyard was converted into animal farm. In 1966 the Department of Antiquities declared the monastery an ancient monument. 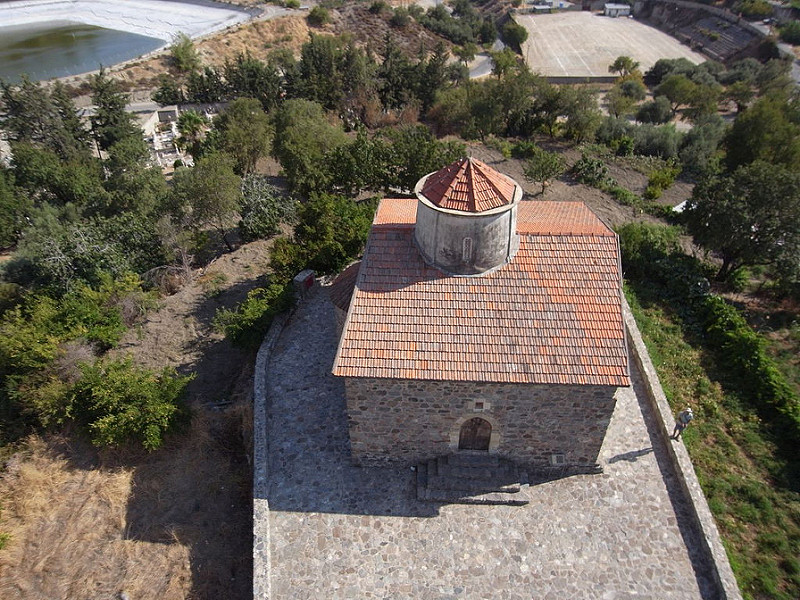 The church of Timios Stavros is located in a central area of ​​the Troodos mountain range, in the village of Pelendri. Its existence is proven by findings of the late 12th century.

Timios Stavros is a monument of world cultural heritage and it has been added to the list of UNESCO in 1985.

According to an inscription found inside the temple, the church of Timios Stavros was built around the end of the 12th century. The church is one of the most important churches in Cyprus.

A walk in the church will surely impress lovers of history, art and culture. 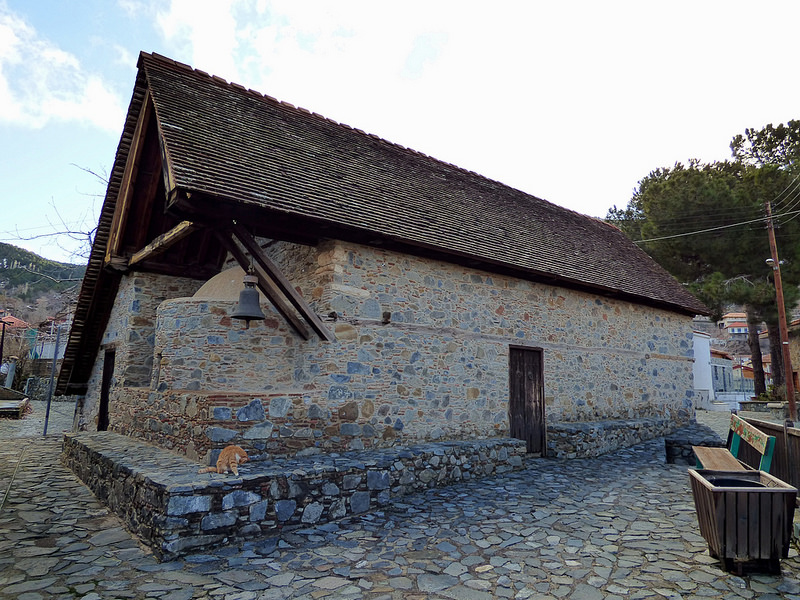 The church of Archangel Michael is built in Pedoulas village in the heart of Troodos mountain range.

According to an inscription found in the temple the church was built in 1474 after donation of the priest Vasilios Chamados.

In 1985 the church has been included to the world heritage list of UNESCO. In the church there is an icon presenting the priest Vasilios Chamados with his wife and his two daughters offering a replica of the church to Archangel Michael.

The church is open throughout the week.