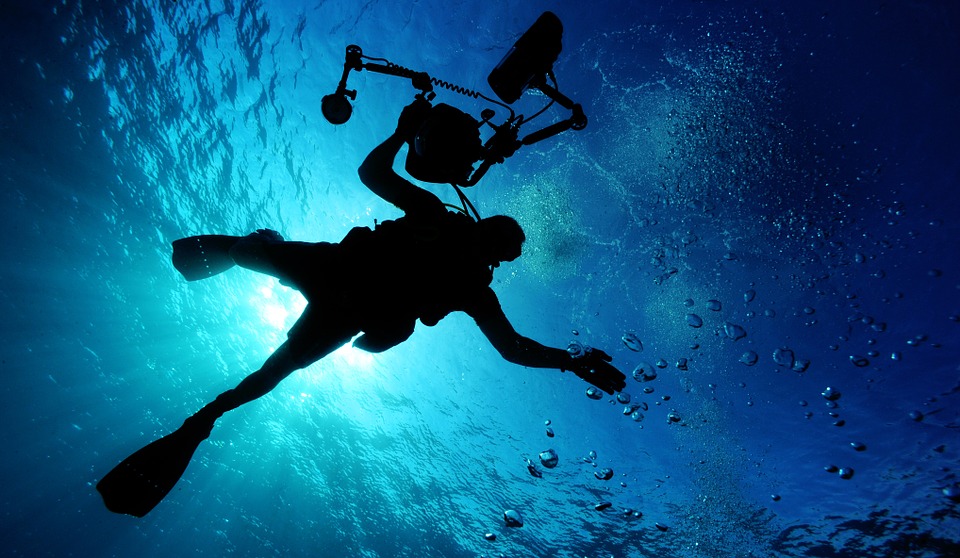 Cyprus is surrounded by sea since the antiquity so the island of Aphrodite always had a great shipping tradition. There are many shipwrecks and diving spots in Cyprus and as a result, the island is an ideal destination for scuba diving. There were many cases where large cargo ships, medium-sized commercial or smaller fishing vessels were sunk or forced to remain immovable on the coasts of Cyprus.

Cyprus is one of the top diving destinations in the world, with about 50 diving centers all over the island and the Zinovia shipwreck being among the first 5 to travel worldwide, with over 40,000 dives a year.

On June 7, 1980, the ship Zinovia is towed out of the Larnaca Bay, a mile off the Xylotymbou coast and after 45 degrees inclined to the left. The ship sank ten minutes later at a depth of 42 meters below sea level. The ship was carrying goods that worth more than 200 million pounds. 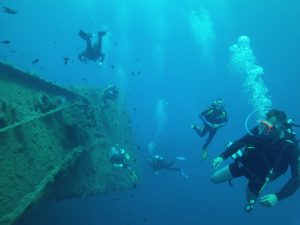 It transferred 108 lorries, Lada cars, toys, food and merchandise of various kinds, and a crew of 140 people. It is remarkable that Zinovia carried one million eggs, which are preserved to a great extent till today.

Today, Zinovia has become a huge artificial reef that hosts thousands of species of fish that are protected by the food chain but also by fishermen who do not risk their fishing nets. At the same time, fishing in the wreck is forbidden by law, and the offenders are faced with strict fines up to imprisonment.

For divers, it is considered an underwater paradise due to the warm waters of the area and the rich life around the wreck, while it is estimated that around 10,000 divers and tourists – visit the wreck each year to see one of the world’s best preserved wrecks and one of the ten best wrecks for diving.

It is an ideal location for beginners and learning divers. It is a point with very easy access and shallow water. The maximum depth is 10 meters. 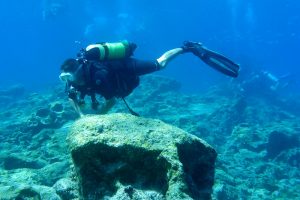 The marine life in Nissia is very rich because many divers visit this spot every day and give food to the fish. There you will see sargos, inks, parades, flutes and many other types of marine life.

The combination of sand and pebbles makes the place gorgeous.

The islands are at the entrance of Protaras coming from Ayia Napa to the right, behind the hotel Cavo Maris.

The Dive Point Amphitheater is a very nice place for diving lovers in the Coral Bay. For those who want to explore and enjoy the magic of the underwater world for the first time, Amphitheater dive is a unique experience. 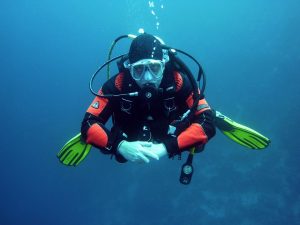 The diving point can be accessed from the coast just after the headland of Coral Bay, with a short downhill walk on the rocks. It was named after the natural formation engraved on the rock, reminiscent of an amphitheater, as created by the sea currents.

In addition to stunning rocks, there is plenty of marine life to explore at Amphitheater diving point.

Cape Cave Greco in the seaside of Ayia Napa is  well known for its underwater caves. The region has so much beauty that can not be described in words. Its bottom is so rich and full of surprises that enchants you from the first moment. Elsewhere it is rocky and elsewhere covered with soft, golden sand.

It has rich underwater life, with all kinds of fish and marine creatures to accompany you throughout your diving.

Access to the point is very easy from the land. When someone comes into the water, they follow a path to the south. There is no other option, as the path is defined by the very bottom formation that has rocks right and left. But the special thing about the particular diving point is the many small tunnels and holes in the bottom. The divers at this place can live the magic of the depth that remind something from tropical islands.