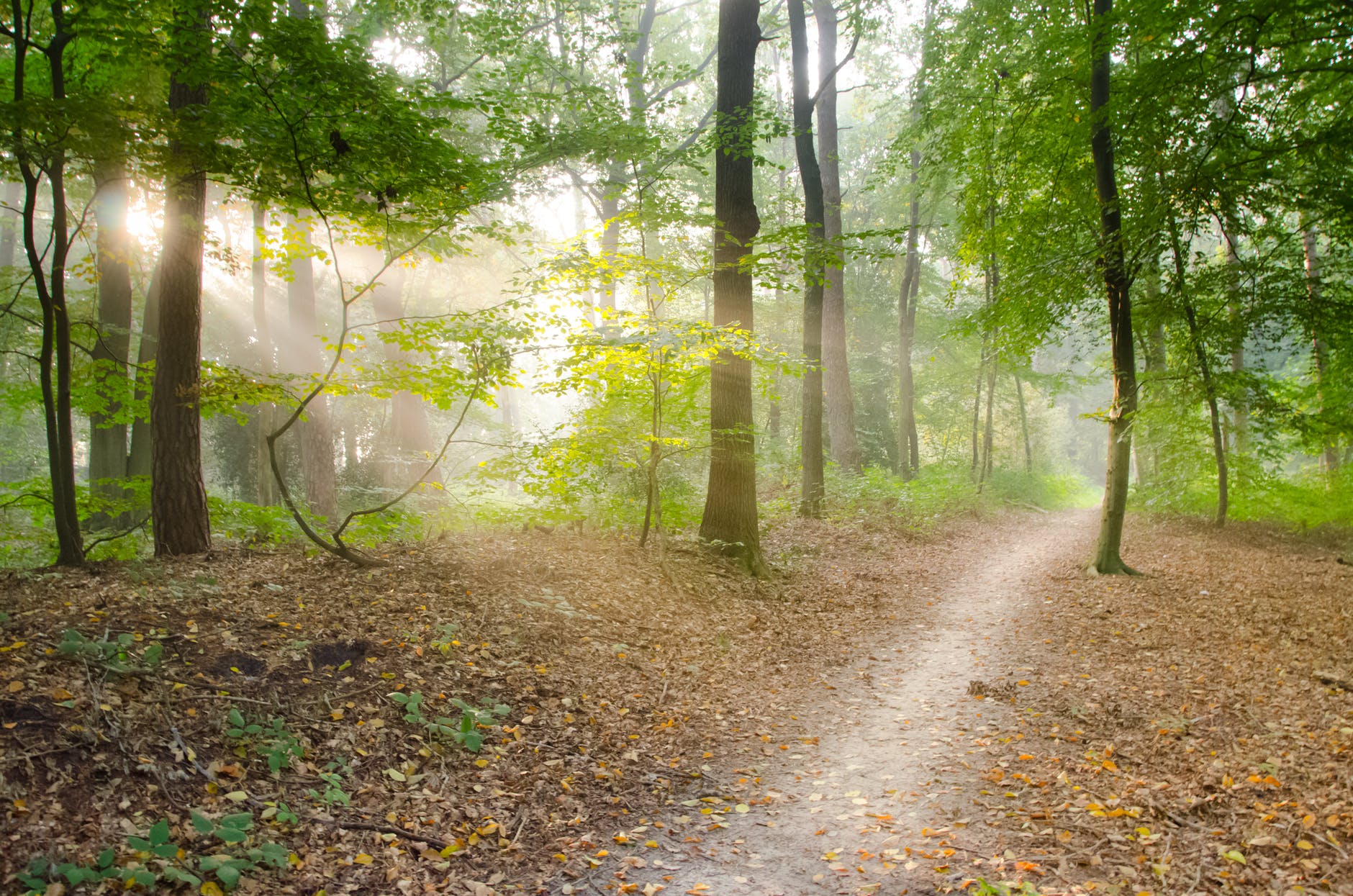 For the lovers of adventure and nature an ideal choice is to cross one of the many trails of nature in Cyprus. Below we present a variety of natural trails that will offer the opportunity for the lovers of hiking and trekking to actively enjoy their exploration of Cyprus nature through hiking. 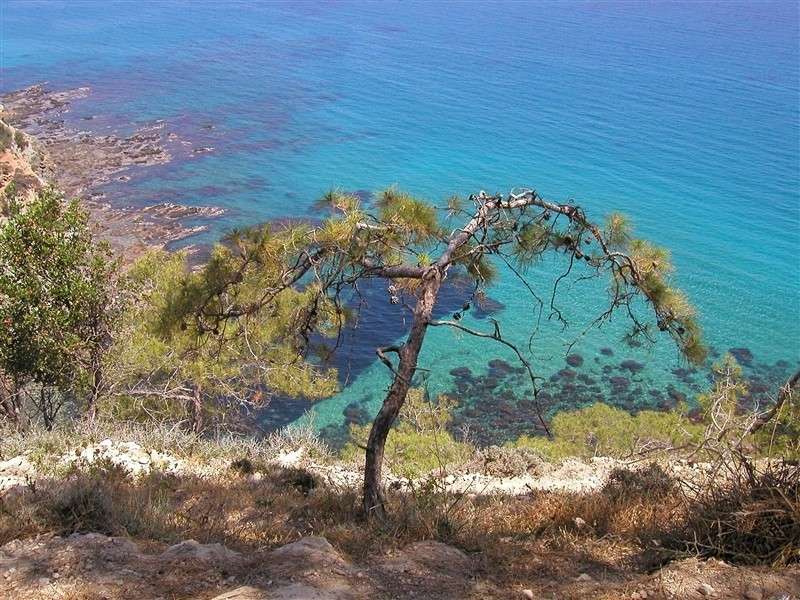 Aphrodite trail is one of the most beautiful natural trails of the island. It is located at the Akamas peninsula and it includes some points that offer majestic views over the Blue lagoons.

Some of the important parts of this trail include The Baths of Aphrodite, where traditionally the Goddess of Beauty was bathed and also the ruins of the Rigena Tower, that believed to belong to a medieval monastery. The natural forests of intact and tracheal pine are characteristic of the area. It is also worth mentioning in a century-old oak near the ruins of the tower.

Along the path there are points with excellent views of Akrotiri Arnaouti, Polis Chrysochous as well as Paphos Forest.

On the way, near the ruins of the Rigena Tower, there is a faucet with drinking water and another one between Loutra and Kakoskali. The Aphrodite path has the Loutra-Pyrgos Rigena section shared with the Adonis path. 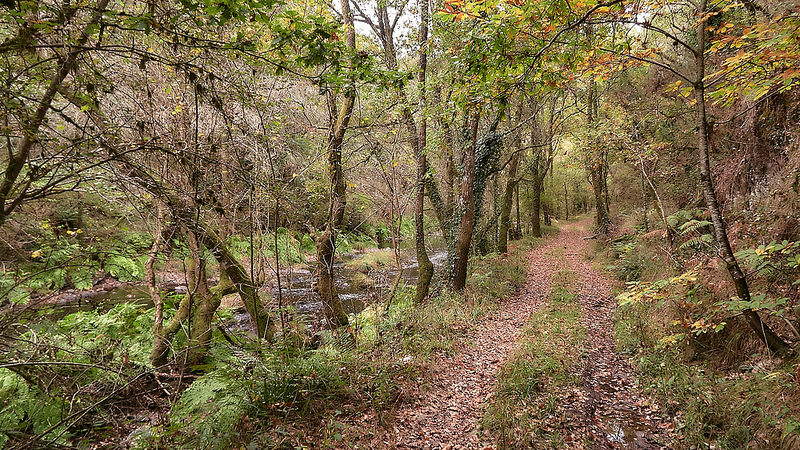 At the trail there is the cave where St. Dimitrianos was living and the natural source of water “Arnies”, from which the trail took its name.

It also passes through the community of Agios Dimitrianos where several facilities such as drinking water and toilets are offered to the walker. 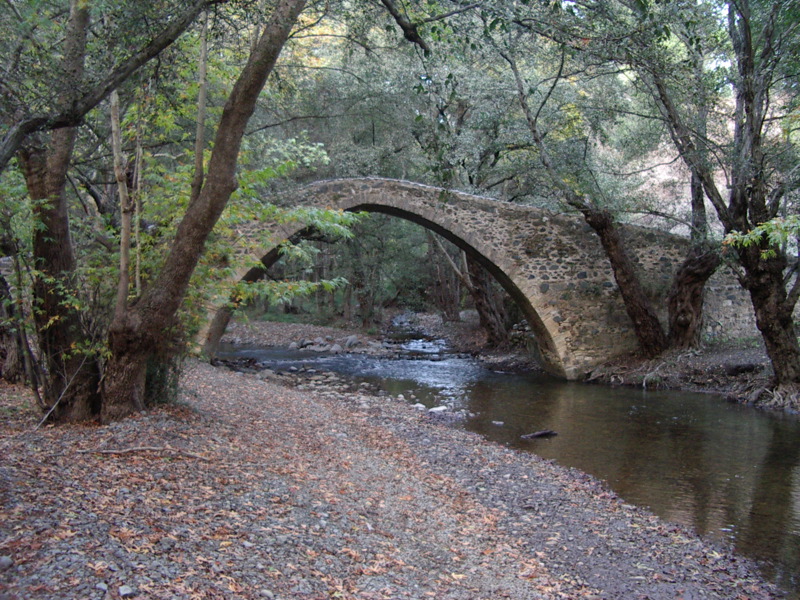 Some of the main attractions of this trail are the medieval bridges of Elia, Tzelefos and Roudia.

The view along the entire route is panoramic.

The trail passes through dense pine-tree tracts, from the dam of Arminou, from the Pera Vassa excursion area (where the trunk of the dried pine gorge of Pera Vassa is exposed), continues through the farm of the Holy Monastery of Kykkos “Sauri”, from the Cave of Sauri, the Mita mantra and near the Gypas Observatory point. 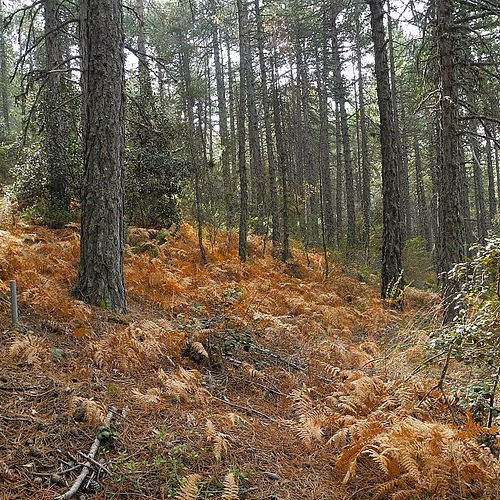 Some of the main attractions of this trail include abandoned hotel of  Verengaria. According a myth It is said that at the hotel lived a rich and loving couple. However, the woman died under unsafe conditions and her husband committed suicide from his despair falling from the second floor of the hotel.

At the trail there are a lot of Natural pine-tree clusters and  it has magical view points of west Marathasa and Paphos Forest. The path ends slightly above the Mitsis School in the village of Lemithou.

The walker can return back from the same route or from the Lemithou – Prodromos asphalt road. 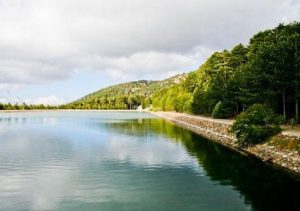 The trail has excellent view of Morphou Bay and the Troodos Mountains. The path passes through a dense black pine forest of the Troodos National Forest Park and it has also panoramic views towards the east to the abandoned galleries of the Chromium mines. 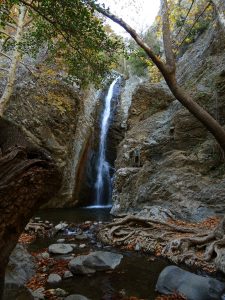 The trail leads to the Mylomeris Waterfall through rich vegetation.

The first part about half of the route follows a parallel course of the Kryos river.

The second part leads to a mountain with rich plantation and excellent views of the South. 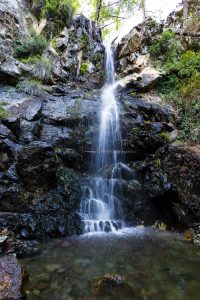 Route: Kalidonia Trail
Starting point: From the main street of Troodos-Platres Square, 3km from the Plateau or from the Psilo Dedro over Pano Platres.
Length: 3km
Time: 1.5 hours

Starting from the side of Troodos Square, the path passes through a dense forest and follows a course along Kryos Potamos that has permanent running water.

It passes through the waterfall of Kalidonia and ends up at the Psilo Dentro in Pano Platres. 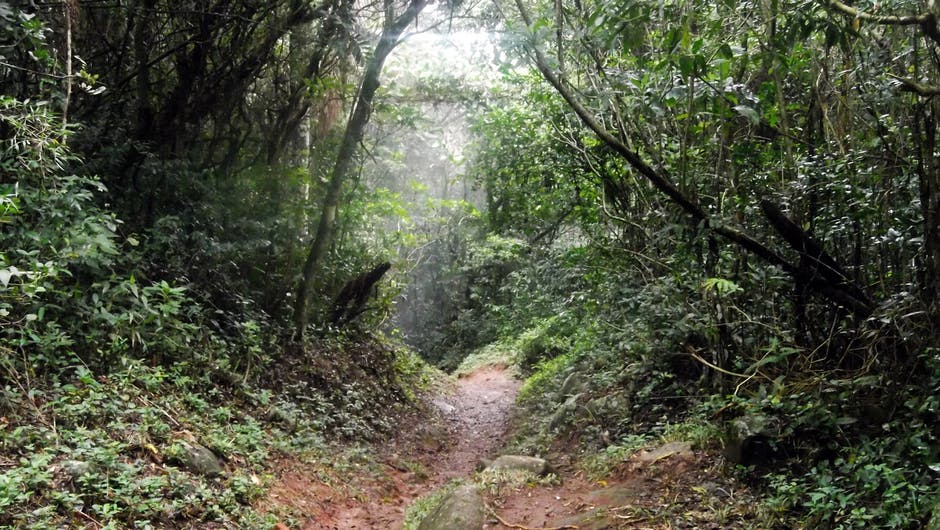 This trail is in a virgin forest landscape.

It starts next to the source of the river Karkotis and crosses the beautiful river valley. It passes near the premises of the closed chromium mine and ends at Kakopetria.

The route can pass through the church of St. Nicholas of the Stegis (12th century), which has excellent frescoes and is included in the UNESCO World Heritage List. 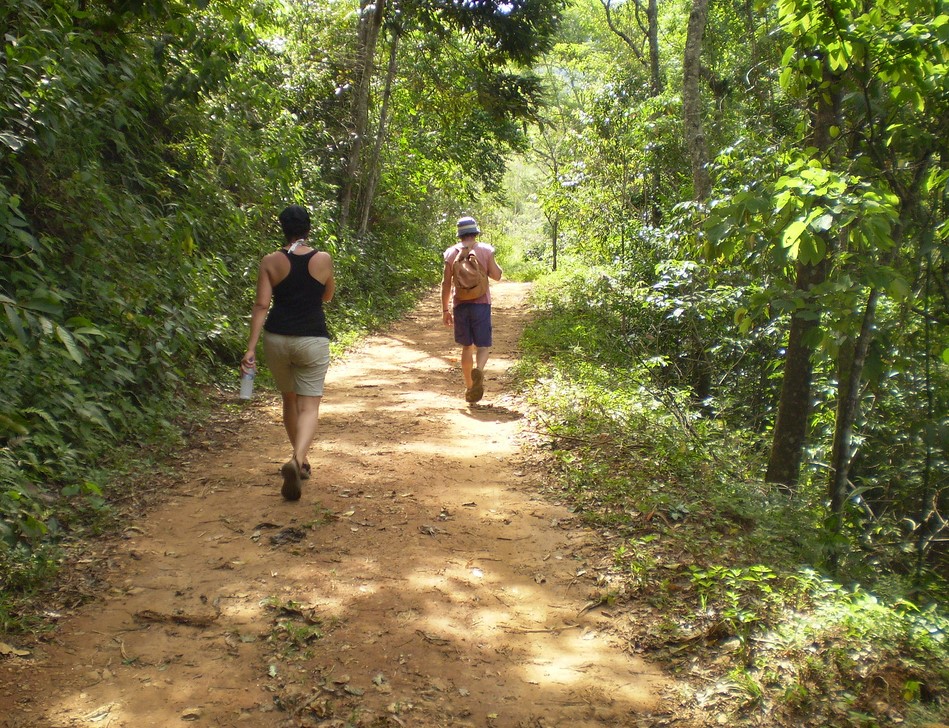 The trail passes through a pine-tree trail with great views of Morphou Bay and ends at Limeria. In Selladi of Straourathkias it joins the Kourdalli-Limeria path and for 2km they have a common route. It offers the opportunity to visit various hideouts used by the rebels of the 1955-59 liberation struggle. 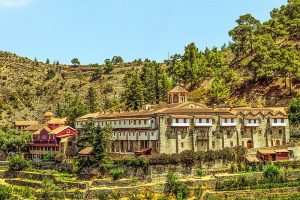 Route: Macheras – Lazanias Trail
Starting point: 500m from the Monastery of Machaira or from the village of Lazanias
Length: 3km
Time: 1 hour

It crosses the Pedia River with rich flora and fauna. It is connected to the Lazanias – Fikardos Path. 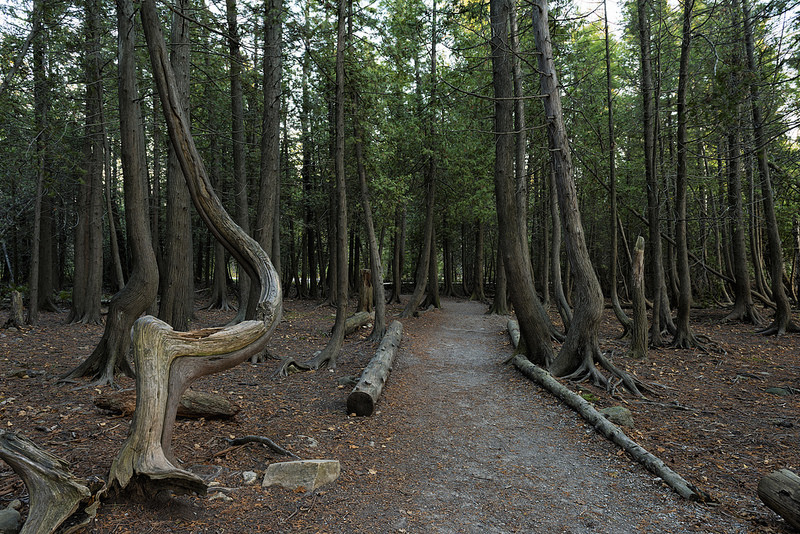 In the village of Moniatis, of Limassol province, there is a trail named “Nature Trail Daphne – Zaraes – Mazokambos”.

The distance a walker can walk to this trail is 3100 meters. Almost the entire route is done through a beautiful riverside forest in addition to a few hundred meters that is done through the streets of the village. It is a linear trail and can therefore be considered to have two starting points and two finish points.

The one starting point is located in the courtyard of the medieval temple dedicated to Archangel Michael and is located in Moniatis village and the other one in the area of ​​Mazokampos and on the street of Moniati – Platres.

Points of interest for this trail include a wooden bridge, an open-air ancient olive mill and a stone bridge, a remnant of the British occupation. Beyond that, it is the beautiful natural environment created by the river over a million years ago, which will impress you. 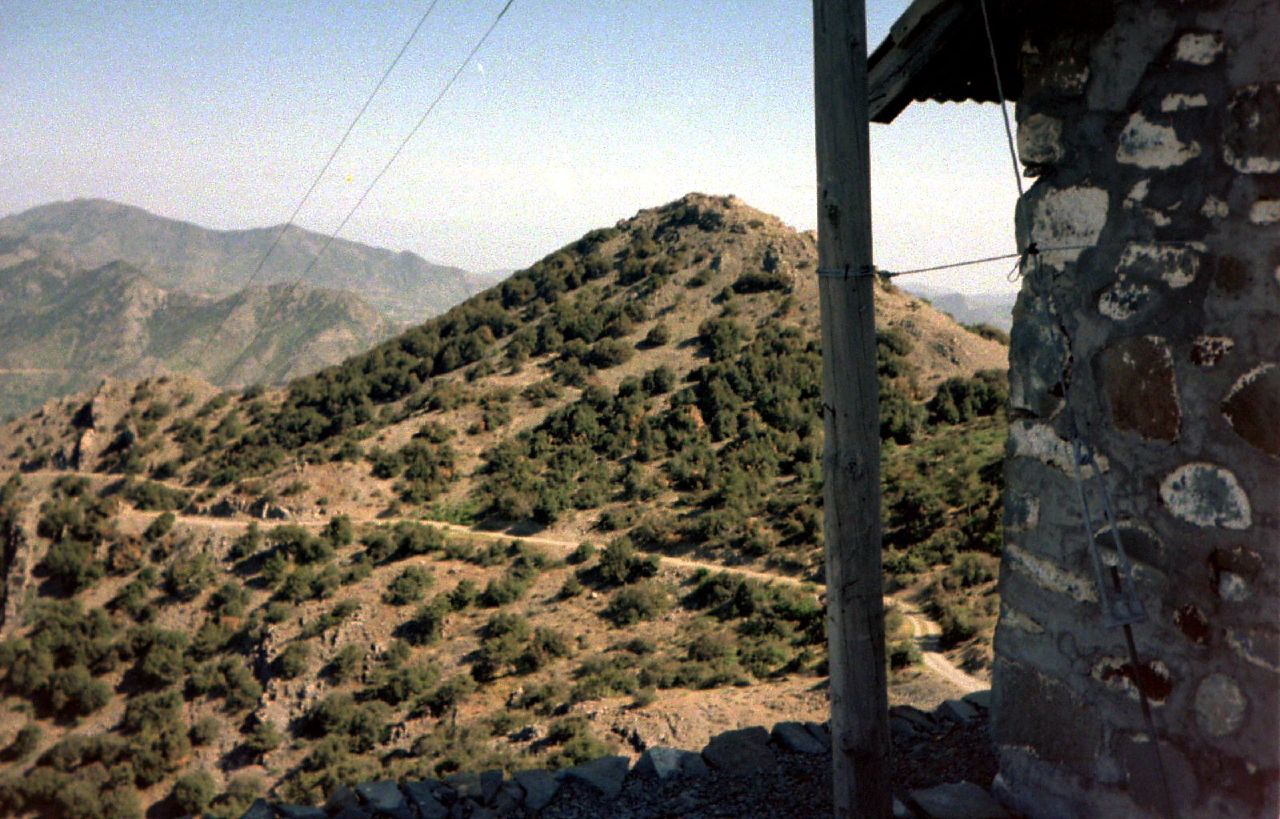 Route: Madari Trail
This is an excellent 13 kilometer cyclical route near Madari Mountains (in Pitsilia, in the Troodos Mountains). The difficulty of this trail is medium, without very steep ups and downs. You can enjoy magnificent views to the south, including Morphou Bay as well as to the north, towards the village of Kyperounta and the top of Troodos.

There is a wide variety of vegetation and you will walk near lakes, wild red roses, cedars, pines, oaks etc.

You will also see the interesting rocks of the area. Before or after trekking, you can stop at the beautiful Xyliatos dam as well as at the church of Panagia Araka, one of the ten frescoed Troodos churches that have been preserved from Unesco as World Heritage Sites. 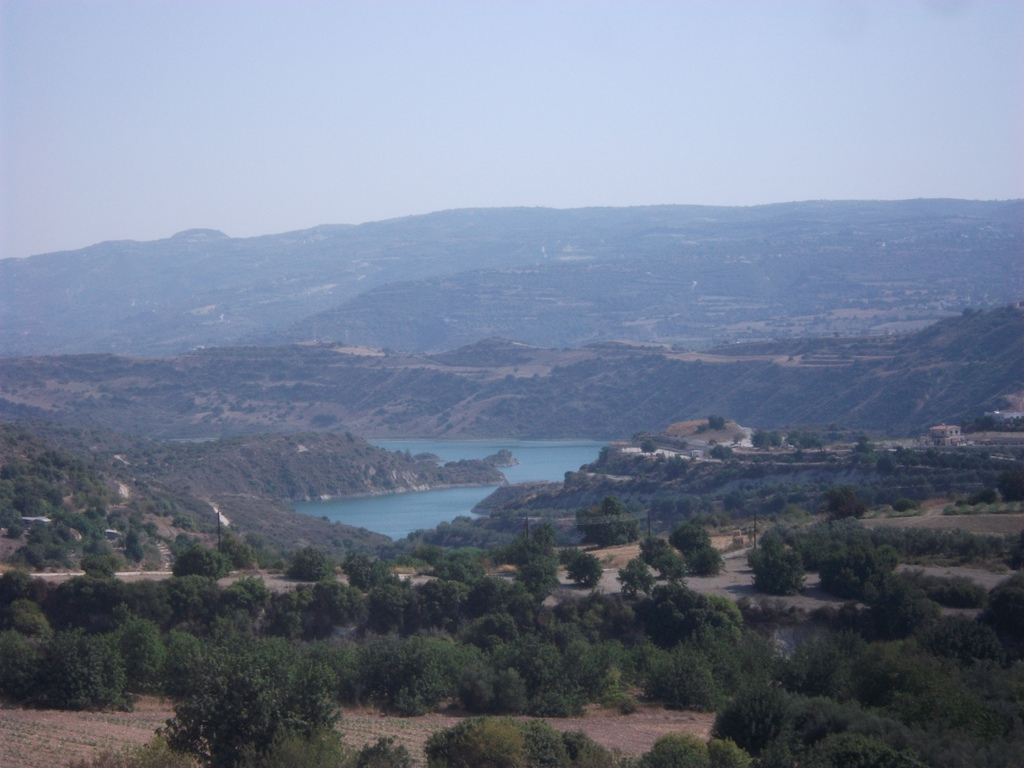 Route: The Oak Trail – Evretou Valley
The route is near the Akamas Peninsula and Paphos Forest. It starts at an altitude of 700 meters, in the picturesque village of Fiti. After a short stop in the village for Cypriot coffee you can descend about 500 meters up to the bank of Stavros tis Psokas river.

At that point visitors can enjoy the splendid view of the valley, which houses many oaks, remnants of the rich oak forests that in ancient times covered many areas of Cyprus. Some of the remaining trees are impressive in their dimensions (and age). You will pass on the north bank of the river and close to three watermills, one of which is well preserved (and easy to locate).

You can stop there for a while to explore the building. Approximately two hundred meters south, is the medieval bridge of Scarfou. You will pass on the south bank and walk along the perimeter of Lake Evretou. There you will have the opportunity to see a multitude of species of wildlife, including a variety of bird species.

Above the lake from the north side you will see the abandoned village of Evretou.

The route is about 10 kilometers long. 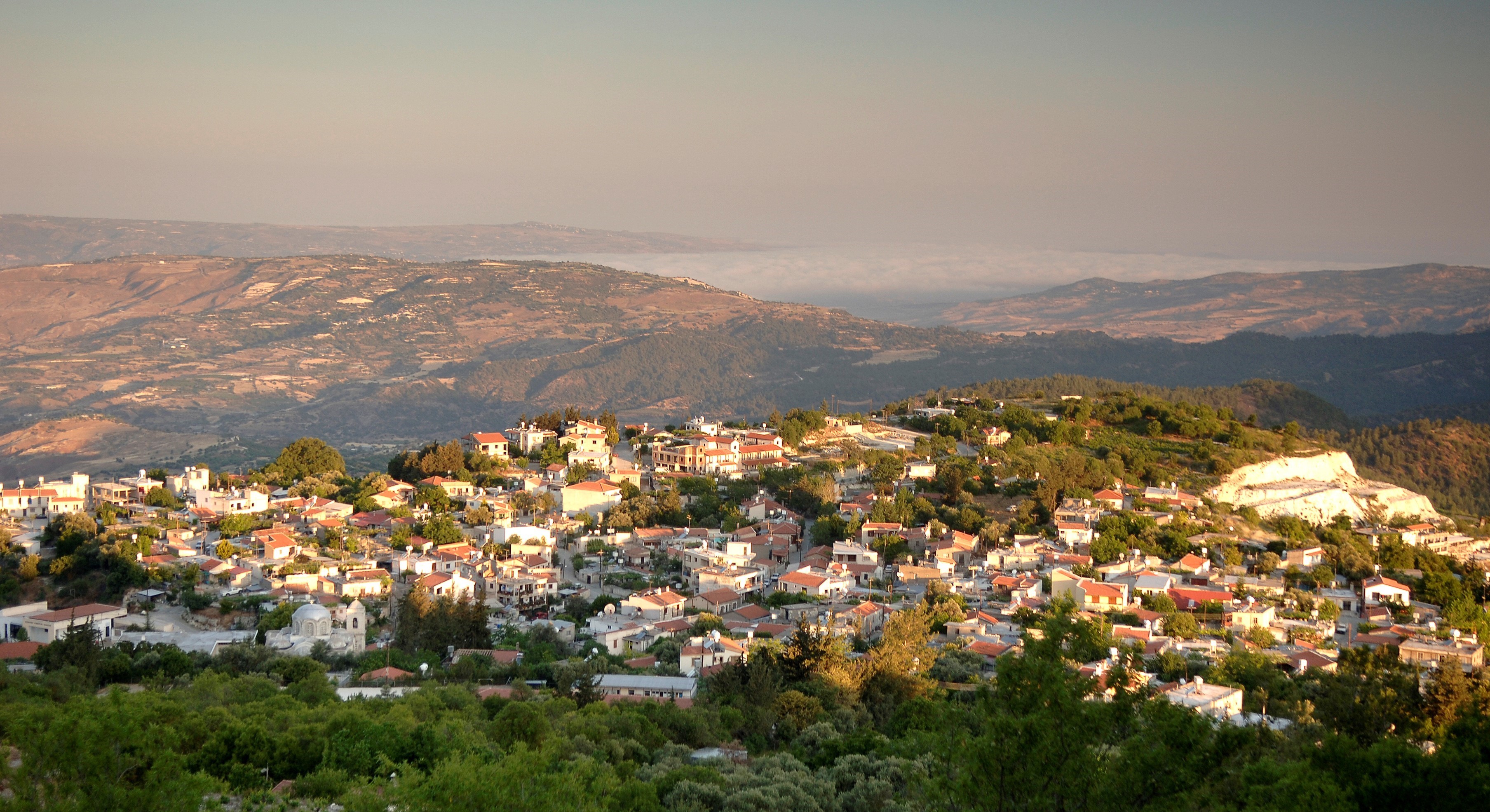 Route: Vouni Panagias Trail
Panayia is a stone built village 35 km northeast of Paphos, bordered by the Paphos Forest and is very close to the artificial lake of the dam of Kannaviou. There is a small number of quality wineries in the area.

We would include the specific route to the top ten in Cyprus. Because of the altitude it is suitable for hiking all year round. The explorer walks and lives the change of seasons literally through the vineyards.

Walking is done on dirt roads, at a relatively high altitude, which rises 300 meters from the altitude at the starting point (usually in the village of Panagia) to over 1,100 meters. The trail is ideal for hiking even in the early morning and late afternoon due to the cool air.

In winter, you may encounter snow or fog, which adds even more variety to those who explore, hear and feel when exploring the hikes.

There are unusual rocky formations and great views of both the Ezousa Valley and the Paphos Forest (and the Xeros Potamos Valley). The path passes by the chapel of Prophet Elias. Hikers can choose longer trips that pass through the monasteries of Chrysorrogiatissa and Agia Moni.

The Valley of Ezousa Trail 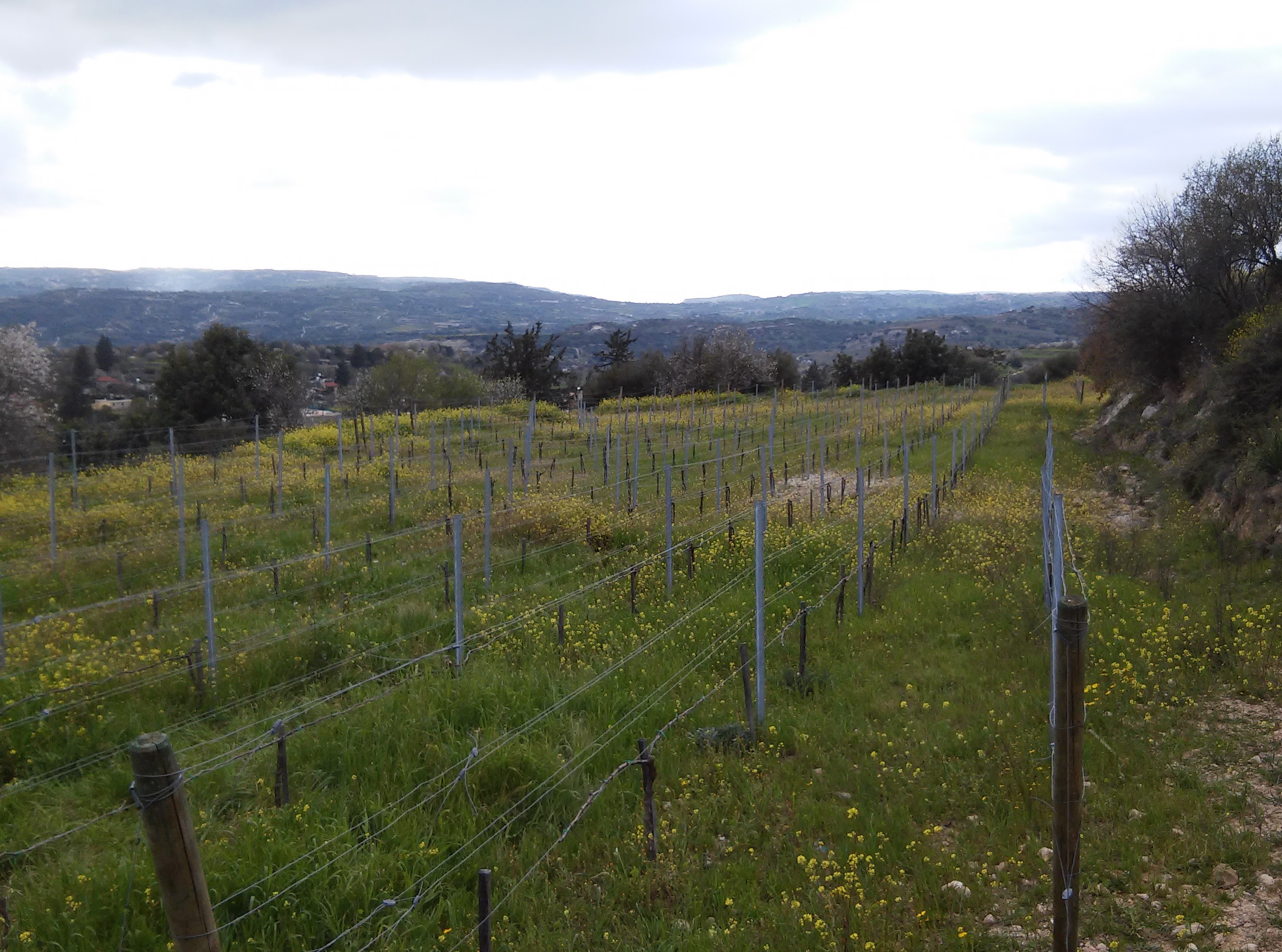 Route: The Valley of Ezousa Trail
The Valley of Ezousas is located in the southwestern part of the Troodos mountain range and extends for almost 50 km. It is scattered with picturesque villages and displays medieval churches, magnificent sights, local wineries, large artificial lake at high altitude, a deserted village, significant biodiversity in birds , watermills and others.

The walking trail starts in the traditional village of Episkopi, whose main attraction is described as “the largest monolith of Cyprus”. In the village there is also a very good Environmental Center as well as the ruins of the medieval church of Agios Ilarionas.

The route is rather easy as the altitude difference is only 200 m. The length of the route is 12 – 13 km. The hiking is done in the open valley and passes through a small forest. Walkers may cross the Ezusa River occasionally and get a little bit wet / muddy.

The route passes by three watermills in the valley and relatively close to the abandoned Turkish Cypriot village ‘Moronero’. Near Houlou village the hikers will pass through the medieval church of Agios Georgios.

The cultural heritage of the village besides Byzantine also contains Latin and Muslim elements (until 1963 the Turkish Cypriot minority lived in the village).

The Trail of Platys Valley and the Tzielefos Bridge

Route: The Trail of Platys Valley and the Tzielefos Bridge

The Platy Valley is one of the ornaments of the Cypriot nature (we hope it will be protected and will continue to exist for future generations).

Before the hike you can visit one of the three frescoed Troodos churches in the area that is an UNESCO monument of world cultural heritage. In the Platys Valley you will walk about 15 km on a dirt road next to the stream. The advantage of hiking in the valley in winter is that there is more water in the river and fewer cars on the dirt road. On the other hand, Platy’s Valley is becoming very green in the summer, which offsets the flow of the river and the relative traffic.

You are likely to encounter frogs, crabs or even Agrina in the valley. Unfortunately, you’ll probably see some jeep safaris, but the experience is worth the periodic dusty, noisy meetings.

You will finish the trip with a visit to the nearby medieval Venetian bridge of Tzielefos. 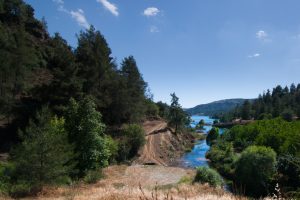 Route: Six Fountains Natural Trail in Arsos
Arsos is a beautiful and picturesque village, and one of the wine villages of Cyprus.

Six fountains is a natural trail that gives to its visitors the opportunity to breathe fresh air and observe the rich flora and fauna that spreads over it.

This natural trail stretches along the river and connects the six Medieval fountains of the village, hence the name given to it.

These taps are connected to the village with stone-paved paths.