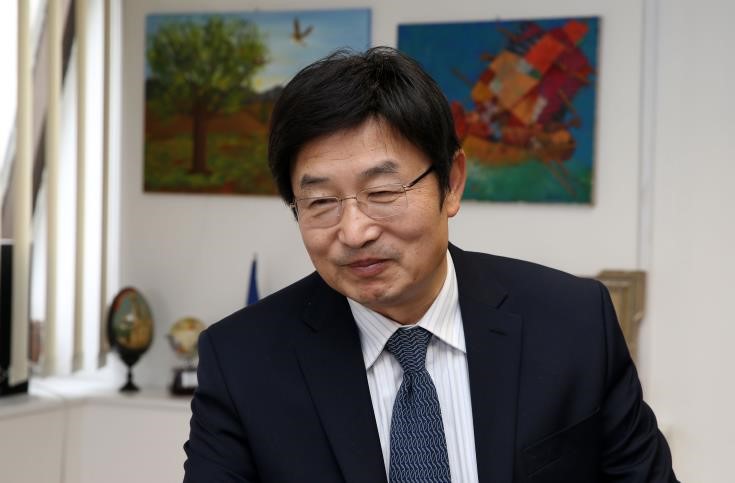 The first batch of China’s medical supplies are ready for transport to Cyprus, says the Ambassador of China to Cyprus Huang Xingyuan, and notes that the two countries are working closely to ensure their timely arrival to aid the fight against COVID -19.

Speaking to CNA, Ambassador Huang also refers to measures taken by Nicosia in a bid to contain the spread of coronavirus, noting that “it is absolutely correct for Cyprus to make prevention of imported cases and death as its priority.”

The Ambassador of the People`s Republic of China also expresses confidence in the resilience of the Cypriot economy. Moreover, he says that actions currently being taken by countries around the world to fight COVID-19 are not sufficient and echoes the call of the President of China, Xi Jinping, for a collective response.

Asked about the main lessons China learned in the fight against COVID-19, Ambassador Huang lists four aspects. “First, the Communist Party of China is a party for the people and always prioritizes people`s health and safety. Herd immunity is not an option for us” he says.

Secondly, he says that China has staged a nationwide fight against COVID-19. All people were mobilized for joint prevention and control in an open, transparent and confident manner, he adds.

Third, China has responded at the fastest speed ever possible, completing specialized hospitals to tackle severe cases and building mobile cabin hospitals to cure patients with mild symptoms, the Ambassador goes on.

As a final point, he says that China has adapted response strategies as the epidemic evolves. “The whole country supported Wuhan and the economic life resumed to support epidemic control, thus creating a virtuous circle” he says.

Asked about the way the experience of China may apply to Cyprus, he says that “recently the Cypriot government has been taking powerful and appropriate measures. It is absolutely correct for Cyprus to make prevention of imported cases and death as its priority.”

On another question, about the drugs in development to treat COVID-19, Ambassador Huang says that both China and the US have put vaccines to clinical tests and other countries also work on it. “When exactly vaccines go to market is a professional issue of science. But I am certain of one fact. If some countries can give up narrow mindedness and selfishness and share research results with concerted efforts, we will step closer to vaccines” he notes.

As for the social and economic impact of COVID-19, the Ambassador notes that the pandemic has been the greatest challenge and crisis facing humanity since World War II, causing major damage to the development of countries worldwide and the global economy.

Given its prevalence, complexity and global spread, we need time and concerted efforts on the global level to heal the damage of the pandemic, he goes on.

“I believe COVID-19 has a direct impact on the highly internationalized Cypriot economy. We have confidence in Cypriot economy’s resilience and quick recovery with lessons previously gained from the European debt crisis” says the Ambassador of China.

Asked if global actors are doing enough to address the crisis, Ambassador Huang replies that actions currently being taken by countries around the world to this end are not sufficient.

He notes that the issue was discussed during the G20 Extraordinary Virtual Leaders` Summit on COVID-19, adding that there have been divergences in terms of polices, speed and level of response by different countries.

Replying to a question with regard to cooperation with EU leaders, the Ambassador echoes the four proposals made by President Xi Jinping at the virtual summit: “We need to be resolute in fighting an all-out global war against the COVID -19 outbreak, make a collective response for control and treatment at the international level, support international organizations in playing their active roles, and enhance international macro-economic policy coordination.” The international community must strengthen unity and cooperation to win the fight against this common enemy of humankind, the Ambassador adds.

The Ambassador notes finally that the first batch of China’s medical supplies to Cyprus includes protective ware and masks donated by the Chinese Government, companies and sister cities. The goods are ready for transport from China to Cyprus, while China has been working closely with Cyprus to ensure its timely arrival to aid Cyprus in the fight against COVID -19, he concludes.