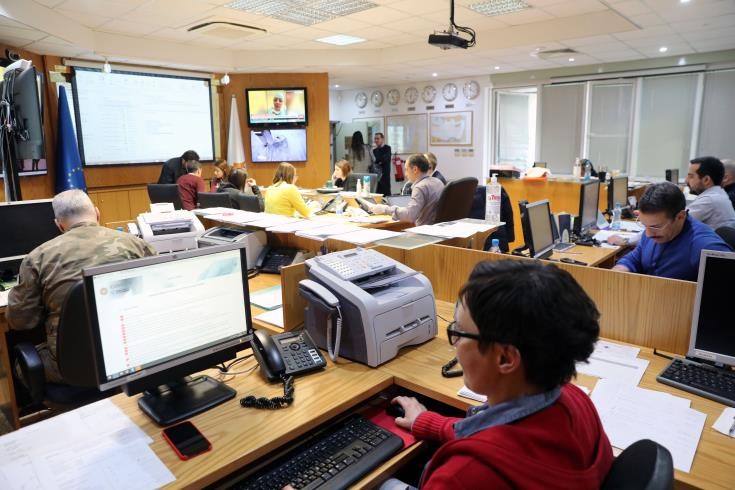 Officials at the Cyprus Crisis Management Center appear optimistic that they will cope successfully with the challenges posed by the coronavirus pandemic and will address the extraordinary situation, with many Cypriot citizens stranded abroad after travel restrictions came into force. The Center at the Foreign Ministry was activated at the beginning of the crisis, in a bid to coordinate various services, government departments and embassies and help citizens with their telephone inquiries.

COVID-19 is the greatest crisis we are going through Paris Samoutis, the Coordinator of the Crisis Management Center, told CNA, adding that times are unique. He expects the crisis to defuse as people stranded abroad gradually return home. Demetris Hadjiargyrou, the Foreign Ministry’s Director for Schengen, Consular Affairs and Crisis Management, expressed optimism that they will finally handle the situation propitiously.

As Hadjiargyrou said, the Center is open daily, from 8 o’clock in the morning till midnight, with people working in two shifts. They received so far more than 1,000, even 1,500 calls and 1,600 electronic messages. “We receive constantly information from various citizens and others, various Ministries, our diplomatic missions” he told CNA.

Samoutis also noted that a total of 1,400 certificates were issued, both at diplomatic missions and at the center, to allow Cypriots to travel back to Cyprus after entry restrictions entered into force.

There are also 50-60 Cypriots who are stranded in third countries, outside the EU, including New Zealand, Australia, India and the UAE, Hadjiargyrou said. He brought the example of 19 athletes who traveled to Thailand to take part in games and cannot return.

Foreign Minister Nikos Christodoulides also commended the Center for its work and posted a message on Twitter saying “a big thank you to all members of the Foreign Ministry personnel, the Center and our diplomatic missions, working around the clock to address problems our compatriots face abroad.”

The Center started to monitor the situation as reports and dispatches from diplomatic missions started to arrive one a half months ago, Hadjiargyriou explained. With COVID-19 at Cyprus’ threshold, the Crisis Management Center was activated immediately and was amend with personnel from the Foreign Ministry, police, the National Guard and the Ministries of Interior, Health and Transport, he added.

After the government decrees, putting entry restrictions in place, there is constant coordination with all competent Ministries, and there have been five or six meetings at the Foreign Ministry to monitor the situation, he added.

Since the beginning of the crisis, the Foreign Ministry made personnel from all Directories available to recruit the Center, with the Director General’s and Minister’s support, Samoutis said from his part.

“All Foreign Ministry staff, regardless of grade, worked as one team” he added and congratulated personnel from other Ministries and services, for their contribution. A total of 30-40 people were used to recruit the Center, which corresponds to one third of the Foreign Ministry’s human resources, he added.

In relation to the challenges they were called to address, Samoutis referred mainly to Cypriots who were stranded in the UK, as flights started to become unavailable. People in Greece found ways to come back, he added. He also referred to people abroad who need assistance, as well as the students and noted that Embassies were instructed to help financially people forced to stay abroad, after reviewing each case.

The Coordinator of the Center also said that they had time to prepare, as the crisis started to unfold in other countries. “From the very beginning, we saw this coming. It was obvious from the moment it became impossible to contain it and we had the first spillover of cases in Japan, Korea, etc” he added. This was the time we realized this was important and issued the first travel advisory, Samoutis went on.

There are contingency plans and one of them is about addressing epidemics, he added, and said that the Foreign Ministry stood by the Ministry of Health since the very beginning. Services need to cooperate with one another, as well as with private entities, like airports and ports, and this is what happened, he said. He also referred to the “Zenon” Coordination Center at JRCC Larnaca, noting they cooperate and coordinate on all levels.

Once restrictions entered into force, things became very difficult and we had a pile of questions about who is entitled what, Samoutis noted. Among other challenges he listed issues pertinent to crossing points and the British Bases. Concerning the latter, he said that they evaluated various issues in relation to the measures in place, aiming to protect people against COVID-19 and which also affect Cypriot citizens working in the Bases. This issue took some time and we made several protestations, he added.

He also said that they are almost daily in contact with the EU Civil Protection Mechanism, looking for ways to repatriate people stranded outside the EU. Cypriots unable to depart from third countries are also expected to benefit and the Cyprus Crisis Center is monitoring developments closely.

Asked if there are any lessons from this crisis for the future, Samoutis says that there is always room for improvement in existing mechanisms. The Center could have a permanent basis and staff from various services, as well as a separate call center to assist people, he said among other ideas. After the current crisis, he added, the time has come to upgrade the Center.

Since Sunday, when the new decree was issued there was a significant number of calls from tourists that were stranded, university students and their relatives. We tried to update people as things are constantly changing and when it was announced on Tuesday that certain people – those who traveled abroad for medical reasons or for a short stay – could return if they managed to get a certificate from one of the diplomatic missions of the Republic of Cyprus abroad we started to assist them to get these certificates.

“People are worried, especially some parents whose children are studying abroad,” he noted, stressing the need for people to remain calm and follow the instructions.

Officer of the Health Services, Anastasia Zahariadou, who is working at the Center as the liaison with the Health Ministry, said she did not have such an experience in the past.

She noted that she assists her fellow workers at the Centre, as the bulk of work is huge, and that once certain problems need to be addressed she gets instructions from high ranking officers of her superiors on how to handle them.