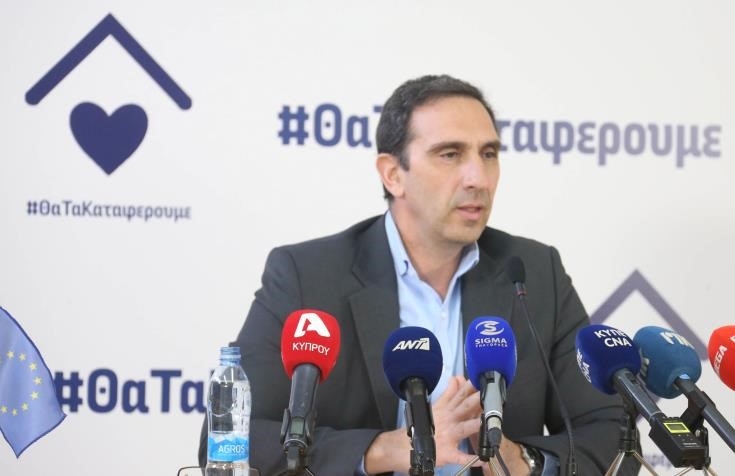 Cyprus Minister of Health Constantinos Ioannou has told CNA that he hopes that in two to three months all restrictive measures in place to contain the COVID-19 pandemic will be lifted, noting however that until a vaccine is discovered “we will have to learn to live with the coronavirus.”

“We will go ahead with a gradual easing of measures. I hope that in two to three months all measures will be lifted,” Ioannou said replying to CNA questions.

“If on the basis of the evaluation we are on a good track and we can proceed with a gradual but controlled easing of measures, I hope that in two to three months we will return to normality,” he pointed out.

Ioannou continued noting that we also need to continue with hygiene and protective measures in order to prevent a great surge in cases.

The Minister of Health stressed that once measures are eased it should be expected that an increase in confirmed cases will occur, adding that it is important that this increase will be of such a scale which would allow us to continue easing measures and so on.

“Specific indices have been given, on the basis of which measures will be evaluated and if and when on the basis of the indices it is felt necessary, then we may have to go back to the previous state of affairs, that is to say to take some measures,” he pointed out, adding that “we have no other choice.”

At the same time, he clarified that no decision has yet to be taken on the date of easing of restrictive measures nor on the economic sectors which will begin to operate again.

“Everything will take place gradually. What I can tell you is that as a general rule, businesses or economic sectors which have to do with people will be the last to open,” he said, adding that “the more contact a business has with people, the later it will start operating again.”

The message from the data so far is an optimistic one, he said, adding that positive coronavirus cases have reduced.

Although many believe that only the course of positive cases is the factor which shows how the situation progresses, he said, for us the number of our compatriots in ICUs and the number or patients in the COVID-19 reference hospital and other hospitals “is of equal importance.”

Unfortunately, Ioannou said, until the vaccine is available, “we have to learn to live with the coronavirus.”

So even if measures are lifted, he said, pointing out that a gradual easing will take place, “self-protection measures must become part of our daily routine and we must continue to take them.”

Otherwise, he warned, a surge in cases will take place.

Asked what will happen with restrictive measures in place in airports, the Health Minister said that “we will listen to the experts’ views, what they have to say as to how airports will begin operating again.”

This is certainly a very sensitive matter, he pointed out, adding that “whatever measures we may take in Cyprus, the virus knows no borders, therefore once airports begin to operate again the danger of importing the virus again and in great numbers will always be there.”

Therefore, he noted, “much thought must go into how they will start operating again.”

He expressed the hope that testing technology will progress so that it can become faster to have results.

Replying to a question on a random testing of 800 people which has been announced, Ioannou said that this will show to what extent the virus has been transmitted in the community. These findings will be very useful and since this is the first research of its kind to take place, the outcomes have been also requested by the European Centre for Disease Prevention and Control

Referring to the public and private hospitals, he said that right now they are operating only for emergency cases, adding that the government will be issuing a decree allowing for appointments to start from Monday onward, while in a few days scheduled operations will also be allowed.

He said an action plan is in place for the operation of hospitals and that a meeting has already been set with Cyprus President Nicos Anastasiades which will focus on that matter.

Referring to third country nationals who are working in Cyprus, the Minister of Health said that they also fall within the categories to be tested in the context of the 20,000-test drive of professionals in the public and private sector.

There is a difficulty on the number of tests which can be completed on a daily or a monthly basis, but despite that, “we are the only country which has gone ahead with a pro-active testing of 20,000 samples, which we may review.”

Referring to immigrants he said that in coordination with the Ministry of Interior the centers where immigrants are residing are checked and if necessary, we will take further steps.

He also said that during a telephone conversation he had with European Centre for Disease Prevention and Control Director Andrea Ammon, she praised Cyprus for the extensive testing it is doing.

“We are the only country who continues to follow the model of immediately locating positive cases and tracing their contacts, which has now been set as a necessary criterion for all countries easing measures,” he said.  In all other EU countries testing is only done on suspect cases in hospitals.

“We rank fourth in the world for testing,” he noted.