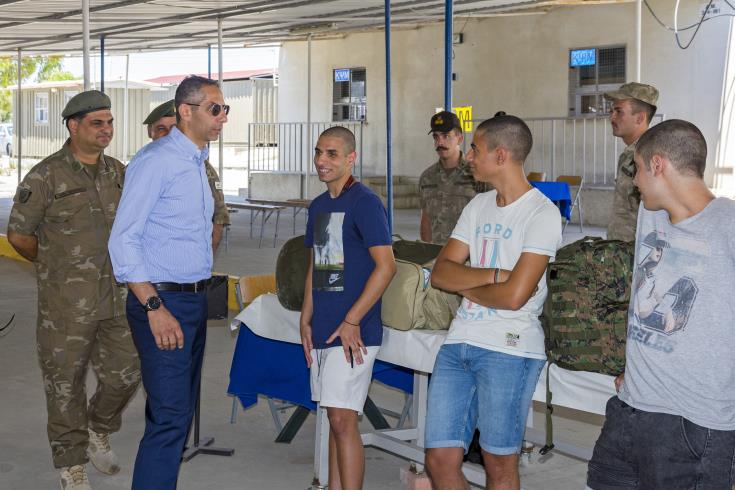 Minister of Defence Savvas Angelides has announced the launch of a web platform for draftees to complete and upload all papers involved for their forthcoming conscription.

The Minister talked about a new digital era as regards recruitment.

Speaking during a press conference to announce the new method for draftees to report as part of the measures taken against coronavirus, Angelides said that the draftees’ report will be spread in ten days time. The newly recruits will receive a temperature check, gloves and masks and will keep distances. Those who report late, will be given a new paper to report to the Paphos Recruitment centre. A recruitment centre will also operate in Athalassa this year allowing those in Nicosia to remain in their town.

Last year’s recruits will be released in September as normal, he added.

He explained that the change this year is that the process to fill in applications and submit papers that was time consuming on the day of recruitment at the centres will be completely changed as it starts electronically from today.

Except those that want to serve in the Special forces, the rest can complete their applications from home, he added.

Angelides said that one of the aims he had set when he took office was to disengage from bureaucratic procedures. His goal, he added, is completely aligned with the government`s policy of modernizing, simplifying and digitizing processes making the citizens’ life easier.

The first phase began on 27 April when newly recruits were asked to obtain all documents in digital form to be able to submit them from today, when the second phase begins. Recruits will upload all certificates and documents electronically and according to their scoring they will be ranked in various units.

They will also be able to submit their uniform and shoe size to expedite the procedure on the day of drafting.

The last day of submitting all documents is 12th June. Those who fail  to complete the process digitally must bear in mind that  their wish will not be possible to be taken into account during the electronic selection process and will be placed according to the needs of the National Guard. Therefore, as the Minister clarified, the timely and correct submission of all paper will benefit new recruits.

From now until June 12, recruits or their parents will be able to contact the support line at 1430 where assistance will be available from 0800-2000 daily including weekends or through live chat at the Ministry of Defence website.

He also ensured that all personal data will be protected.

Regarding the new recruits’ health safety, he said that all health measures set by the Ministry of Health are in line with discipline and are already implemented in all military areas.

Angelides stated that instructions have been given so that both at the Units and during new recruits’ reporting, for no overcrowding and gathering of a large number of people in the same area.

At the third phase, said Angelides, details will be announced on the dates and procedure of newly recruits’ reporting.

Due to conditions this year, newly recruits will not take part in exams for probationary reserve officers. He also clarified that the national guards of 2019 ESSO will be released in September as scheduled.

Regarding the swearing in ceremony of the new recruits this will take place after the second week of their training in the ranking areas while the attendance of guests will depend on the decrees that apply regarding coronavirus at the time.