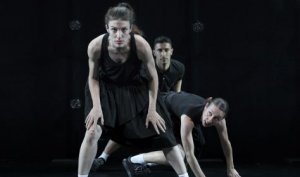 A dance performance on the borders of theatre and music; a poetic swarming speech unwinding the thread of the female narrative on stage.

Speechless is inspired by public speeches, manifestos, articles and texts, bringing to the fore the fragmentary and unofficial voice of women as it has travelled through the centuries before reaching the present day.

Female emancipation and independence, gender equality issues are constantly recurring and seem more and more relevant to our days. How does the female speech travelling through time sound today? How do we connect with the female narrative?

Sofia Mavragani, persevering on a socio-political problematic, with her subtle humorous approach and a disposition for ludic exploration, returns to her collaboration with Martha Mavroidi, known for the fusion of traditional and contemporary music. In Speechless, Martha Mavroidi creates vocal compositions for a chamber orchestra where the performers themselves are the musical instruments. Chara Kotsali, Giorgos Kotsifakis and Sania Stribakou alternate in a challenging performance on the fundament of dance that sometimes draws towards theatre and sometimes towards music. With a distinctive lyricism and among pop raptures, Speechless becomes the channel through which we follow the voice of women, as it has travelled through the years.

Sofia Mavragani is an exceptional case in the field of dance as she has not followed the regular dance curriculum. She graduated from the “Athens School of Economics” (Bachelor in Business Administration (2000)) and from the EDDC-European Dance Development Centre, ArtEZ-University of Arts, Arnhem, NL, (Bachelor in Dance Making), 2005.

Being fondly interested in the field of education and exchange, she develops experimental workshops on improvisation and composition, such as the research project playforPLACE which has travelled to 17 cities, in Europe, Latin America, Africa and Oceania, which is a workshop of creative collaboration between young choreographers and musicians-composers annually held at Megaron – The Athens Concert Hall. In parallel, she teaches dance improvisation and choreography at dance schools and dance centres in Greece and abroad. She is a founding member of Fingersix, an international artistic network, and of the non-profit organization Fingersix/Athens.

With the financial support of the Ministry of Culture & Sports of the Hellenic Republic.

All dance performances are part of the 22nd Cyprus Contemporary Dance Festival 2019, organized by the Cultural Services of the Ministry of Education and Culture and the Rialto Theater.