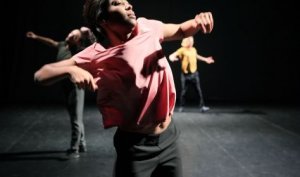 The 22nd Cyprus Contemporary Dance Festival begins with a choreography by Arno Schuitemaker that has been presented at renowned theatres and performing arts festivals in over 15 countries across Europe.

With seeming casualness, If You Could See Me Now sets a chilled-out club dance into one dizzying wave-like motion. The three performers see no limits to what they take out of their bodies, propelled by the rhythm of the beat.

Progressing continuously, the vibes accumulate and electrify, drawing the audience deeper and deeper into the performance. At maximal exertion and sweaty physicality, the incessant movement flow audaciously redefines itself as luminous and versatile impressions. The performance space dilates and shifts. Time gets chopped up then reshapes.

From ecstasy to turmoil, from build-up to its dismantling, If You Could See Me Now challenges expectations and appeals for another look, to look again, and it transforms an exact spontaneity into a hypnotic sensory experience.

Compelling, mesmeric, intense — he creates works one has to experience. Using ongoing, perpetual movement, his perception-based performances become immersive and transformative encounters that speak about life and the time we live in. In collaboration with various extraordinary performers, composers and lighting designers each work shapes its own identity and perspective. Often characterized as interdisciplinary, they transcend dance and push its boundaries.

The performances have been presented at renowned theatres and contemporary performing arts festivals in over 15 countries across Europe and beyond. In Theatermaker magazine, both The Way You Sound Tonight and I will wait for you were selected in the critics’ lists featuring among the best performances of the season. Tanz magazine selected him as one of the most promising choreographers in their yearbook 2017 and Dance Europe characterized him as “one of the leading dance makers in The Netherlands.” He is a winner of the Dioraphte Encouragement Award and of the 2nd Jury Prize at [re]connaissance 2016.

All dance performances are part of the 22nd Cyprus Contemporary Dance Festival 2019, organized by the Cultural Services of the Ministry of Education and Culture and the Rialto Theater.