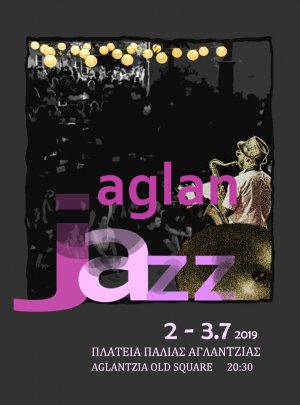 AglanJazz is held annually, since 2006, at Aglantzia Old Square. AglanJazz has managed, throughout these years, to bring jazz to the people, and to encourage people of all age and various backgrounds, to enjoy live performances from talented musicians from around the world, free of charge. AglanJazz has become a highly anticipated summertime Festival, by both the Musicians and our loyal fan base, attracting around 4,500 visitors every year.

Odysseas Toumazou Trio is a newly formed project dedicated to performing original compositions. Odysseas’s creations are influenced by jazz and classical music, but also from traditional Greek and Cypriot music, producing a unique sound catering to a wide array of audiences of diverse music tastes. Improvisation is a key element of Odysseas’s music, enabling the audience and the environment alike to subtly influence the direction, the sound, and consequently, the journey one embarks on in tandem with Odysseas and his fellow musicians.

A band that shows again and again the wonderfully laid-back and artful way one can free oneself from all musical constraints and traditions. The Band consists of three musicians who have opened the gates to a new musical understanding since the formation of their band in 2011. Originally coming from jazz, the three gentlemen have basically left that all behind them and found their own musical identity, drawing their influences from different directions.
Besides the strong instrumental skills and the highly complex songs of the musicians, it is above all the driving energy in the playing style, melodies, harmonies and riffs that sets the music of this trio apart from traditional jazz, and is rather reminiscent of the progressive rock era in the 70s. After releasing the critically acclaimed album “An der vulgären Kante” in 2016, Edi Nulz presented their latest album “El Perro Grande” in spring 2018.

Vladyslav Sendecki is considered one of the most powerful and creative solo pianists in the European jazz scene. The Süddeutsche Zeitung praised him as a “master of emotion, creating poignant musical virtuosity”. And the New York Village Voice made him one of the top five jazz pianists in the world. He is highly ranked among the great pianists of the last 100 years, with Herbie, Chick and Duke and Jarrett.

For his part, Jürgen Spiegel has been a driving rhythmic force and sensitive sound painter in the world-famous Tingvall Trio for more than fifteen years. Now the two Hamburg-based musicians have met in an unusual piano/percussion constellation for an exciting project in the studio: Poetry meets Dynamics, virtuosity on fine dialogue, freedom on the exchange of emotions. A journey of sound that is difficult to avoid, and which naturally dissolves the boundaries between jazz, classical and world music.

The Quintet is a transformation of previous collaborations between the musicians. The band navigates in the paths of Jazz and traditional music of the Eastern Mediterranean by performing original compositions. A collaboration between the Jazz Piano Trio members and two virtuoso soloists, the Quintet masterfully renders the spirit of the Orient and the Balkans.

A creative and surprising violinist, Luca Ciarla easily transcends the boundaries among genres to trace an innovative musical path, a magical acoustic seduction in perfect balance between written compositions and improvisation, traditional and contemporary sounds. He has successfully performed in jazz, classical and world music festivals and concert series in more than fifty countries in the world.

The Italian violin wizard owns the stage with his fiddle and a few toy instruments. Step by step, with a loop pedal, he performs live all the parts, playing the violin like a guitar, a cello or percussion. In this imaginative landscape Luca sings, whistles, plays other instruments and adds new virtuosic passages; the music continuously evolves into a dazzling solo orchestra.

His music draws on real-life snapshots, which are then processed into artistic creations and carve out a path of their own. Field recordings fused with electronic sounds, traditional rhythms and melodic lines filtered through improvisational processes, notes and sounds from all over the world transmuted through a pure jazz idiom and much more have already been recorded in his past albums (“Scarborough Tales” of 2010, “A Parking Lot Performance” of 2012, “World Echoes in Athens” of 2015). Mihalis Kalkanis hails from a musical family with a long tradition from Asia Minor and Northern Greece. Although rooted in the depths of this tradition his own music tends to manifest patent urban references, a fact that renders him one of the most interesting creative musicians of the new generation. His group formed the brand new music proposition of the 2018 Athens Technopolis Jazz Festival and, during the same year, he travelled extensively and presented his work in other festivals and live stages all over Greece. On 3 July, his performance is sure to captivate us and create a magical atmosphere that will awaken our emotions.

A collaboration of Chilean bassist Rodrigo Cáceres with Rodos Panagiotou, Giorgos Morfitis & Elias Ioannou, brings a new ‘air’ to the Jazz & Latin music scene of the island. A different approach to Latin rythms, Afro- Cuban & Brazilian mostly, blended through a modern post-jazz aesthetic. Macumba was formed soon after the arrival of Rodrigo Cáceres in Cyprus and it has managed to create a dynamic & innovative sound. After warm reception by live audiences in concerts & Festivals of Cyprus, the band presents original compositions. A live performance full of groove & intense stage presence, will transport the audience into different corners of the world.