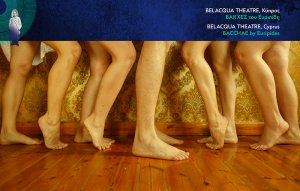 In Bacchae, Euripides recounts the advent of Dionysus to Thebes in order to impose his worship, the bacchanalian cult. King Pentheus refuses to accept it, and Dionysus gets his revenge. He infuses frenzy to the women of Thebes and Pentheus finds a horrid death by his own mother, Agave.

The intercultural production aims to create a new performance language, juxtaposing the worlds of East and West, Male and Female, Instinct and Reason, while presenting Dionysus as an “idea”, a concept rather than dialectic, provocative and elusive. Japanese-inspired acting techniques and aesthetics are utilized in an attempt to represent Dionysus and Bacchae, as the “Other”, through the collision of the native and the newcomer, the resident and the stranger.

*Spectators attending performances at the Curium Ancient Theatre are advised to arrive at least 45 minutes before the performance.

STEPHANIS stores in all cities

TIME OUT Kiosk in Paphos

In N Out Kiosk in Paralimni

€45 Festival pass (per person for attending all six performances)

€10 group sales (over 10 persons per performance) at [email protected]