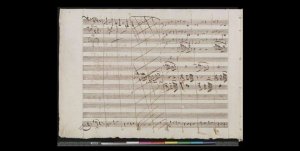 Probing the intersections of visual and sonic elements as these affect our perceptions of history and processes of subjectivation, culture and spirituality, Evelyn Anastasiou invites us to experience things synaesthetically. If we think (about) this room as if we “suffer” from this neurological trait that results in a joining or merging of senses, activating sensual, linguistic and impersonal intensities into the direction of a vital materialism, we might reach a space where all boundaries are perforated and where sense and feeling interact with representations and materialites with a mood for intervention; as a desire to redistribute elements in both time and space.

Anastasiou creates a spatial symphony through an allegoric chain, with references to 1971, the year in which ‘The Magic Flute’ by Wolfgang Amadeus Mozart was first presented, and 1958, when Benjamin Britten presented ‘Noye’s Fludde’, an opera intended primarily for amateur performers, particularly children. The two compositions are connected through a mystical tone and the use of music as an element of spiritual progress, escape and survival. The artist’s research led to her gaining access from the Berlin State Library to the original notation for ‘The Magic Flute’. There, she discovered a series of “mistakes” – parts of musical writing that Mozart chose not to include in the final result and were thus never released: that is, the material that matches their graphic representation was never ‘imprinted’ on the ears of the public. The few “mistakes” are now the basis for the production of a new partiture and a sound piece which, like a fragmented and unruly footnote of the opera to which it constitutes an anachronistic parergon, it transfers the sound of (an emotional) dissonance from the end of the 18th century to today. The silent substance is carried as a cry, an instinctual reaction that creates an aesthetic of (social) anger, a political act which, with an anarchic mood, opens up a space for the awakening of “harmonious” provisions.

I add to this chain the year 1739, when David Hume released the “Treatise on Human nature”, where he likens the human brain to a fragile and crack-filled boat which has to be dumped into “the open sea of human nature” in order to “complete a journey around the world”. The Prussian blue of Anastasiou’s wood carvings positions us in this open sea. The children’s faces that are discerned on the woodcarvings, inspired by documentation from Britten’s staging and printed on surfaces primed as if they would host visual hagiographies of saints, are joined by Mozart’s deleted music in order to create unorthodox blueprints that touch upon questions around the meaning of experience, the ways in which time can be understood as something beyond a chronologically intended evolutionary process, and the revaluation of the ways in which our senses and feelings help us process the unfamiliarity we feel against the flow of history, inviting us to a reimagining of the space ‘between the lines’.

Experiencing the weight of the processes that determine a lot of what we recognise today as “naturally evident”, disregarding the hagiographic tone of nostalgia, the relations between sound and colour become an element for analysing the culturally stabilising currency of the division of the senses (why do we favour the evidence of sight instead of sight in conjunction with hearing?), a tool of expression (how can timbre and hue create or express any sort of feeling?) and an effort to attune tonalities and frequencies (how do we approach and live with “the other?”).