Four Fables and A Queen 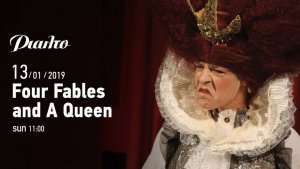 A fascinating performance for the entire family. Four stories wrapped in a fable: A comedy in mime and in words for eight animals and one queen. A virtuous combination of words in English and Greek, with movement and drama that captivate both kids and adults. A multi-awarded performance from Israel that has travelled all over the world.