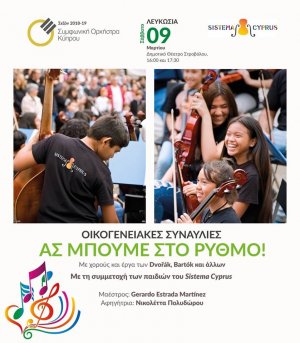 With Spring around the corner, the Cyprus symphony orchestra with the participation of the children of Sistema Cyprus and guest conductor Gerardo Estrada Martinez help us get into the rhythm with folk or folk-based dances by Dvořák and Bartok, while “Fugue with a little Bird” by Venezuelan composer Aldemaro Romero (1928-2007) has been represented as “one of the foremost lovely items one will hear in one’s lifetime”. It’s back to the Baroque but with Jean-Philippe Rameau’s opera-ballet “Les Indes Galantes”, whereas anybody who’s seen the film “Madagascar” can don’t have any issue recognizing the main theme as written by contemporary musician Hans Zimmer. Join in the rhythm then!

With the participation of the children of Sistema Cyprus