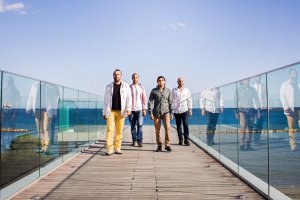 After a very successful event in July, ‘Macumba’ band returns for one more concert at Technopolis 20 garden, on Saturday, 17th of August, at 8:30pm. Enjoy a different approach to Latin Music, an explosive cocktail of Brazilian funk, samba, rumba and guaguanco afro-cuban blended through a modern post-jazz aesthetic, by three Cypriots and one Chilean. The famous band is presenting this year its first music album ‘Como Jugando’, an explosive repertoire which includes original songs and some versions of Latin – Jazz, which will not leave anyone indifferent!

Macumba quartet is formed soon after the arrival of the Chilean bassist Rodrigo Caceres at Cyprus, in March 2017. There he meets Rodos Panagiotou (drums), George Morfitis (keyboards) and Elias Ioannou (trumpet), three virtuous musicians, well-known in the latin-jazz music scene of Cyprus. The four of them will work together, to create their own unique, dynamic and innovative sound.

Entrance: €12
Reservations are necessary at 70002420 (calls only)
Sponsor: Deputy Ministry of Tourism

A few words about the musicians
Rodrigo Cáceres (bass and vocals): a Chilean bassist, well-known in the latin-jazz, flamenco and world music scene, internationally. He performs and organises seminars across Europe, Lat. America and Sri Lanka, able to appeal a multitude of audiences ranging latin, jazz, flamenco, pop, afro, funk and reggae. During his long-term stay in Spain, he collaborates with Rubem Dantas, percussionist of Paco de Lucia and Chick Corea and shows up in big festivals: Jazz Almuñecar, Espantapitas, Etnomusic, Sonderos etc. Significantly renowned in the Spanish music scene, he records up to 9 albums and plays alongside prestigious musicians such as Diego Guerrero, Chano Dominguez, Dan Ben Lior, Puchero del Hortelano, Maui etc. In Greece, he performs in Akropol Theatre and Yakinthia Festival with Oscar de los Reyes, Eleni Giannopoulou and Christo Tzifaki. In Cyprus he performed in Pattihio Theatre next to the Italian pianist Joe Diverio and records for Andrea’s Georgiou album. Currently, he is preparing seminars, projects as well as his own music album.

Giorgos Morfitis (keyboards): born in Limassol, started his classical music training from the early age of 6. He gets introduced to Jazz Music at Nakas Music School in Athens, Greece. Soon after he studies at I.S.A Conservatory of Havana in Cuba, focusing on classical music composition, arranging and Jazz / Latin Performance. In 2004 he studies and specializes in Latin Jazz Music at Codarts Conservatory of Rotterdam in Holland, obtaining a B.A and a M.A. In 2012, he moves to Madrid to teach modern music at Gredos College and Katarina Gurska Conservatory. George has participated in well-known European Festivals such as North Sea Jazz Festival Round Town, Madrid Jazz Festival, Paradise Place Jazz Festival, at the national T.V. of Madrid etc. He finally returns to Cyprus participating regularly in different music projects.

Elias Ioannou (trumpet): was born in Limassol. He has studied at Codarts University in Rotterdam specialising in Jazz Trumpet. He has shown up in concerts all across Europe, Holland and Cyprus highlighting the North Sea Jazz Rotterdam Festival in which he performs up to three times. In the meanwhile, he attends several master classes with world famous musicians such as Barry Harris, Joshua Redman, Snarky Puppy, Aaron Parks and gets introduced to Latin Improvisations alongside the great trumpeter Amik Querra. The last years he has been touring within Holland, recording with different jazz, latin, reggae and pop bands. Finally he ends up to his country of origin, to teach trumpet and work in different musical projects.

Rodos Panagiotou (drums and percussion): is a well- known Cypriot drummer, coming from a family of musicians. He shows up on stage at the early age of 10. After studying for several years at the Conservatory of Greece and Rotterdam, he specialises in Latin- Jazz and World Music and sets up the Brazilian Percussion Group Batukinio, performing for the first time at the opening of Cyprus Small Countries Games. During the last 10 years, Rodos has been teaching at the European University of Cyprus and University of Nicosia. He has performed with Blue Wire, New Dimensions and also recorded and toured with well- known composer Andreas Georgiou in Cyprus and Europe. Rodos has collaborated with significantly important musicians such as: Hernan Romero, Giorgos Dalaras, Marios Fragkoulis, Kostas Makedonas, Debora Meyers, Pantelis Thalassinos, Dimitris Mpassis, Glykeria, Stratos Kyrpios, Anagnostakis, Stefanos Korkollis etc.