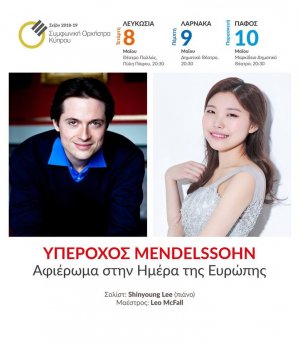 Besides being an outstanding child prodigy in music composition, Mendelssohn was also a well-travelled cosmopolitan who enjoyed immersing himself in European cultures – a genuine European citizen of the 19th century. Between January 1829 and June 1832, the German composer went on a grand tour around England, Scotland, France, Switzerland, and Italy. During this trip, he made the acquaintance of such eminent figures as Berlioz, Donizetti, Glinka, Mosheles, Chopin, and Meyerbeer.

It was in Italy where Mendelssohn completed his first piano concerto and conceived his “Italian” Symphony. This concert honors the Day of Europe, and the CSO rises to the occasion: marvelous music by a true European, directed by British conductor Leo McFall, and featuring the talented Korean soloist Shinyoung Lee who studies in Germany!