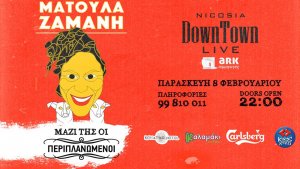 Matoula Zamani was born in 1981 in the village of Panagia in Trikala Greece. She is of vlach origins and in her veins runs a magic spell from the Karpathian Mountains.

She plays music in Athens, in the Cyclades islands and in villages. She met with the poet from Metaksochori and since then she sings his songs. She met the “Burger Project” music group in a restaurant and together they praised gypsy ladies. In the meanwhile she writes her own music and lyrics and sings the “Τi and the E” to a ragoon. you mayfind her wherever selfless love flourishes.