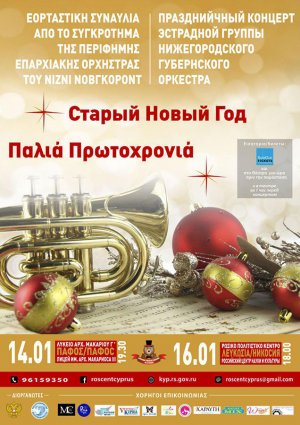 The Russian Cultural Centre invites you to 2 festive concerts, dedicated to the celebration of the beloved Russian feast- the Old New Year! The concerts will be given by the music and dance ensemble of Nizhny Novgorod Provincial Orchestra. The concert will be held within the framework of the international project “Russian Theatre Seasons in Cyprus”.

The concert will unite a children and general program of beloved New Year melodies. The event will be highlighted by its special guest- the famous Russian astrologer Tamara Globa, who will give her predictions for the New 2020 Year.

The concert is especially dedicated for our young spectators, who already loved the mega dolls and the funny characters from the orchestra’s concert in October 2019.

The “Russian Theatre Seasons in Cyprus” in an international projects that is being implemented for a second year in a row by the Russian Embassy in Cyprus and the Russian Cultural Centre in Cyprus under the auspices of the President of Cyprus, Mr. Nicos Anastasiades with the support of many governmental, municipal, public and private organizations.