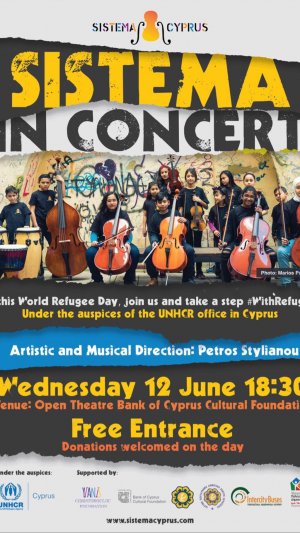 Sistema Cyprus’ orchestra is preparing to draw everyone back into its rhythm at its upcoming concert which is dedicated to the World Refugee Day. Seventy five children from Nicosia and Larnaca will be joined by Windcraft Junior Band to showcase their talent and achievements through a musical program that will offer the audience some beautiful music and great inspiration. The concert will take place on Wednesday June 12th at 18:30 at the Bank of Cyprus Cultural Foundation’s Open Air Theatre in Faneromeni, Nicosia.

The concert is organized under the auspices of the United Nation’s High Commissioner for Refugees in Cyprus as part of its activities on the occasion of this World Refugee Day. With the slogan “Join us and take a step #WithRefugees” the concert aims to send a ‘loud musical’ message calling for the respect, acceptance and integration of refugees into the new societies. Across the world, institutions and individual people from all different socio-economic levels, take small or big steps in solidarity with refugees. Inspired by the actions of so many others, we invite each and every one of you to take a step and support refugees in any way you can on this World Refugee Day.

The orchestra, under the artistic and musical direction of Petros Stylianou, promises to take the audience on a musical journey through rhythms and melodies from around the world and especially from Latin America.
Admission at the concert is free of charge and we would be honored if you joined us in our cause. The audience will also have the opportunity to make a donation to Sistema Cyprus on the day, supporting its efforts to bring social change through music.

About UNHCR
UNHCR was established by the United Nations General Assembly in 1950 to help millions of refugees in the aftermath of World War II. We work to ensure that everybody has the right to seek asylum and find safe refuge in another country, having fled persecution or war at home. We help to build better futures for refugees, asylum-seekers, internally displaced and stateless people, many of whom have nobody left to turn to.
In Cyprus, UNHCR opened an office in 1974 to organise and coordinate humanitarian assistance for the displaced populations in both communities. Today, UNHCR’s primary objective is to assist the Government to further develop and improve its asylum legislation, procedures and capacities for a refugee protection system fully in line with international standards. We seek to ensure respect for refugee rights and acceptable standards of treatment of asylum-seekers, particularly as regards access to asylum procedures, reception conditions and freedom of movement. We promote good practices in relation to policies and measures that support the effective integration of refugees into the social, economic and cultural fabric of Cypriot society. We advocate for Cyprus’ accession to the UN Conventions for the prevention of statelessness and the protection of stateless persons.

About Sistema Cyprus
Sistema Cyprus is a music and social program inspired by El Sistema of Venezuela that aims to provide all children and young people with free music education through orchestras and choirs. The second aim is to promote respect and recognition of vulnerable population groups in each society. The program began in September of 2018, housed at the Peace hall in Ledras Steet through the support of the Municipality of Nicosia and in Larnaca, through collaboration with the Foundation of Cultural Creativity for Children and Youth.Sistema Cyprus is a member of Sistema Europe, which is the European network of all El Sistema inspired programs.
You can find more information about Sistema Cyprus on its website www.sistemacyprus.com as well as on its social media pages on Facebook and Instagram.