Soundscapes of the World with the Mestizo Sax Quartet 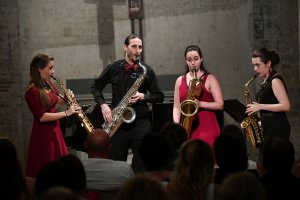 Mestizo is originally a word from Spanish, which translates to a person of mixed cultural ancestry – perfectly describing this quartet’s global diversity from Israel, Costa Rica, and the United States. Consequently, the Mestizo Sax Quartet is most passionate about integrating music from each of their ethnic musical traditions, as well as playing pieces by composers from their home countries.

‘Soundscapes of the World’ takes the listener on a journey through classical music to ethnic/folk inspired pieces written by composers from all over the world including the styles of klezmer, tango, jazz and more! Enjoy the Mestizo Sax Quartet at Technopolis 20, on Monday, 3rd of February 2020, at 8pm.

A few words about the Mestizo Saxophone Quartet
Based in Florence, Italy, the Mestizo Saxophone Quartet was formed in 2017 while studying with renowned Italian saxophonist, Marco Albonetti and now holds an active and diverse performing schedule throughout Italy.
Most recently, Mestizo took first prize in Italy’s prestigious competition, il Premio Nazionale delle Arti in Messina, Sicilia and will return to Sicily for a concert tour in May 2020. Mestizo has performed concerts in the 62nd ed. Of Spoleto Festival dei Due Mondi, 2019 Spinacorona
Festival in Napoli, LeAltreNote Valtellina Festival in Northern Italy, SetteNoveCento Festival in Rovereto, the International SaxArts Festival in Emilia-Romagna as well as the cities of Rome, Bologna, Cremona, San Marino, Messina, Trento, and Imola. As soloists, Mestizo played the European premiere of David Maslanka’s Concerto for Saxophone Quartet and Wind Ensemble under the baton of Maestro Lorenzo Passerini. Mestizo also holds the special prize for best saxophone quartet and second prize in the chamber music division of the 43rd ed.
Concorso di Esecuzione Musicale ‘Francesco Cilea’, first prize in the 11th Concorso Nazionale di esecuzione musicale “Citta di Piove di Sacco”, and was a finalist in the 16th Concorso Internazionale “Luigi Zanuccoli”. As a chamber group, Mestizo has performed in masterclasses and projects with renowned saxophonists Marco Albonetti, Arno Bornkamp, Phillipe Geiss, Russell Peterson, Derek Brown, and pianist Alberto Miodini.