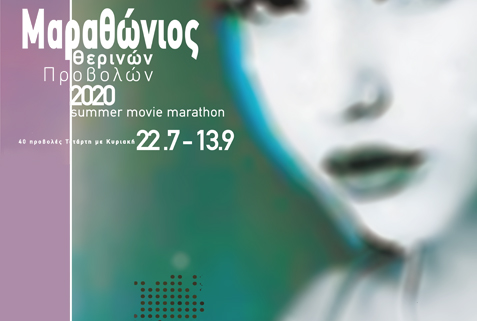 Yiannis’ plans to leave Cyprus are put on hold when his dog, Jimi, runs away and crosses the UN buffer zone that divides the “Greek” from the “Turkish” side of the island. Since animal exchange between the two “sides” is prohibited, Yiannis reluctantly joins forces with a cast of unexpected characters to smuggle him back

Sentaro runs a small canteen where he prepares traditional “doriyaki”, a sort of a double pancake stuffed with a sweet-bean sauce. With no enthusiasm for anything, Sentaro passes his days in a monotonous way. The day when an elderly lady called Tokue approaches him proposing her home-made sweet bean sauce no one could have imagined how their lives were about to change. This relationship will change them forever! A literally sweet movie dedicated to the beautiful surprises of life!

Premiere at the Cannes Festival, Un certain regard

They spend all their energy between work and home doing everything they can in order to raise their children in a healthy environment. One day however, Laura suddenly leaves home without any explanation despite her huge love for her children. It is now only up to Olivier to handle everything and keep the balance. With no ethical lessons, the film focuses on the power of love and understanding!

Somewhere in a far away Peruvian village, a Hollywood movie crew is about to shoot a big production western film. Kansas, an American talented stuntman, falls in love with a prostitute and decides to stay in the village at the end of the shooting. Even though the movie’s set is deserted, it is used by locals for a ceremonial representation with Kansas becoming the center of attention. With this film Dennis Hopper pays tribute to the end of the western movie era as well as presents a rather darker side of the people behind the set.

Somewhere in the Aegean sea, on an island called Armenaki, a French Member of the European Parliament and a Greek economist arrive in order to examine possible future investments. Surprisingly they find that the island’s inhabitants have established their own alternative, moneyless lifestyle. A spiral of unforeseen events forces them to reevaluate their own living and thinking

Jack Malik writes songs and tries to become famous in the music world. After an international black-out takes place he realises that no one else knows the Beatles apart from him. Everybody believes that Jack is the one who has composed the Beatles songs and he will soon be seen as a genius! However, the only person who knows the truth is Ellie who watches Jack exploiting and selling music that doesn’t belong to him. Jack will need to consider what holds most value for him

Ove is a middle-aged grumpy man who is constantly searching a reason to argue. Everything and everyone upsets him and he always tries to provoke the unsuspecting neighbours by pointing out anything considered to be wrong. One day a lively family moves in to the house next to Ove’s and things get even worse. But the new neighbour Bahar doesn’t get intimidated and finds the way to connect to Ove’s wounded soul. A beautiful film about the power of mutual understanding and friendship.

The National Dance Academy of Georgia trains dancers who will represent the country with the National Team. The Academy demands that the dancers strictly follow the traditional steps with any personal expression considered to be a divergence and a lack of respect towards national values. In such an environment Merab receives intense training so as to be able to join the National Team. However, everything will change when a young dancer, Irakli, joins the Academy. The two young men will create a strong relationship that few people will approve

Nomination at the Sundance Audience Award, Jury Prize at the Deauville Festival

Menashe runs a grocery store in the Jewish area of Brooklyn. He doesn’t strictly follow all the codes and customs of his community and the others tend to treat him as a black sheep. He has a son, Ruben, that he adores but whose custody has lost since he is no longer married. Instead his brother raises Ruben until Menashe gets married again, just as the Torah stipulates. Despite the social pressure Menashe doesn’t give up and tries to change the mentalities with his own approach. In a smart way the film reminds us how beautiful it is to be unique.

Luton, England 1987. Javed is a teenager who grows up in a traditional Pakistani family during an intensive era with racial and economic troubles. His identity quest is extremely complicated. However, he will seek refuge in the timeless lyrics of Bruce Springsteen which express his thoughts and feelings. The new film by the director Gurinder Chadha (Bend It Like Beckham) is a feel-good experience based on the lyrics and music of Bruce Springsteen.

Seven hills of Rome, seven nights and seven days. Marcello is a young journalist who spends time with rich and famous people. His life is full of ephemeral pleasures and he sees no reason he should change anything in his routine. Glamourous parties, unexpected acquaintances, pleasant companies, what else could a young man seek? Yet a series of circumstances will make him realise the vanity of his actions. The masterpiece of Fellini that many consider as the greatest film ever on the big screen again!

A famous intellectual writer with social sensitivity advocates that every wealthy person should help those in need. During a televised talk-show someone challenges him to do as he says so he can give the good example. Having no other option but to accept, he has to face all the consequences that will occur…

Fabienne is a famous French cinema star that everyone admires. Her daughter who lives and works as a scriptwriter in New York will travel back to France with her family in order to assist to the publishing of Fabienne’s autobiography. This reunion will create memorable situations as revelations from the past will come to light. The explosive duo Deneuve-Binoche in the leading roles remains unforgettable!

Carlos Acosta (or Yuli as his father used to call him) is a legendary dancer who started dancing in the streets of Havana and ended up in the Royal Ballet in London. The film narrates the life of the great dancer who managed to break the taboos and was the first black dancer to play Shakespeare’s Romeo. Filled with the memories of Carlos Acosta the film is a magical journey through time!

Cairo, some weeks prior to the Egyptian Revolution of 2011. Noredin is a Police officer who is in charge to investigate the case of a young singer’s death. His colleagues push him to classify the case as a “crime of passion” but Noredine is not convinced and keeps investigating until he comes across a scandal involving high positioned people. How determined is he in order to reveal the case to the public and put himself and his career in such danger?

On the island of Büyükada in the Marmara sea, an American writer named Lady Winsley is murdered. The experienced private detective Fergün immediately arrives from Istanbul in order to investigate the case. Despite his professionalism and his precise method the research does not lead to any satisfying results. Someone is hiding a crucial clue. Or more than one? As more clues are revealed so are more secrets…

It is the sixth of January and just like every Epiphany, the priest throws a wooden cross in the icy waters of the river Bregalnića for young men to dive for the prestige and glory of catching the cross. This year however a young woman named Petrunya also dives with them and manages to grab the coveted cross. The reactions will be immediate. This custom is traditionally reserved for men so Petrunya should not have dived in the first place and now she is obliged to return the cross. Petrunya considers that since she fought like everyone else she has the right to keep the cross. And this is how one of the most caustic comedies of the year begins!

Mishellis, a small-time crook in his late thirties, is in urgent need for money to repay his gambling debts. After a failed wedding robbery attempt he tries a more indirect approach were he impersonates a wedding planner in order to steal the money-stuffed envelopes brought as gifts to the wedding of an upper class family. In the process, he ends up a bit closer to his clients than he originally planned.

Originated from Aidani in Asia Minor, a young woman settled in Athens decides not to leave the fate determine her life. She writes poems and lyrics and she will become the greatest female Greek lyricist of the twentieth century. She will collaborate with major music professionals such as Vasilis Tsitsanis, Manolis Hiotis and Manos Hatzidakis. She will have to struggle against a society controled by men not only in order to impose herself as a respectable lyricist but also to live her life as she wishes. Her name is Eftyhia Papayannopoulou and we have all sung her lyrics!

Judy Garland arrives in London for some sold out appearances. Many years have past since she received world fame thanks to the film “The Wizard of Oz”. She is now a diva that everyone recognises and admires. Yet she is also a woman being exhausted by showbiz who dreams of little and seemingly insignificant pleasures of a simpler life. Just like the lyrics of her famous song: “Somewhere over the rainbow, blue birds fly, birds fly over the rainbow, why then, oh why can’t I?” A tribute to one of the major legends of music and show!

Cyprus issues new classification of countries with amendments for Greece, Thailand and Morocco

Cyprus announced on Tuesday a new classification of the countries based on...
August 5, 2020
2

Which Foods will Give you a Glowing Skin

“Hidden Gems” of Cyprus worth exploring this year!

Limassol is presenting something special this summer!

Investors, who choose Cyprus for company incorporation, may enjoy one of the...

Buying Real Estate property in Cyprus Cyprus is one of the most...
August 19, 2018

The need of modern people to come back into contact with nature...
August 17, 2018

Cyprus is an island located in Mediterranean so the two main ways...
August 16, 2018
This site uses cookies: Find out more.