The 34th: The Story of Marriage Equality in Ireland 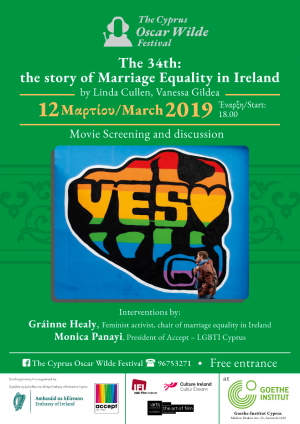 Documentary screening and discussion with Gráinne Healy and Monica Panayi at Goethe-Institut Cyprus, 12/3, 18.00. A “The Cyprus Oscar Wilde Festival” event.

“The 34th: The Story of marriage Equality in Ireland” (2017), by Linda Cullen and Vanessa Gildea, tells the story of the people who formed “Marriage Equality” in ireland, and explores the events and the referendum that led to the 34th amendment of the irish Constitution (Marriage Equality), that permitted marriage to be contracted by 2 persons without distinction as to their sex.

The film screening are followed by discussion with Gráinne Healy, chair of the yes referendum campaign and Monica Panayi, president of the accept LGBTI Cyprus.

The event will take place at Goethe-Institut Cyprus, Av. Markou Drakou 21, on 12 March, at 18.00 and is part of ‘’The Cyprus Oscar Wilde Festival’’ which is co-organised by the Embassy of ireland in Cyprus.

The event will be held in English.