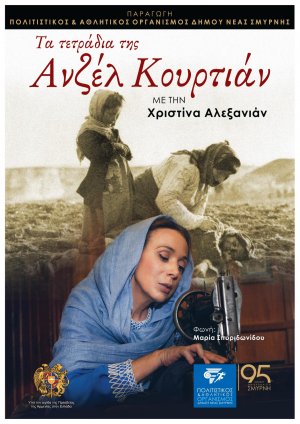 A troublesome and requesting solo performance to portrary Anzel Kourtian in a theatrical adaption of the book entitled “The Notebooks of Anzel Kourtian” written by Anzel Kourtian herself, a survivor of the Armenian Genocide (1915) and the Destruction of Smyrna (1922).

It is basically the story of war seen through the eyes of a young child. Bursa, Afyonkarahisar, Smyrna and Mytilene are the stops of Kurtian’s wandering.

Before, she settled on the Greek island of Crete and moved later to Kokkinia in Piraeus, where she started her own family and satisfied her existence with her children and grandchildren.

The serious atmosphere of the Armenian Genocide and the Destruction of Smyrna, the immigration and the survival, the loss of relatives, the pain and the disaster, arouse deep emotions and chills in the hearts and souls of the spectators that moved toward becoming piece of the occasions described in front of an audience.