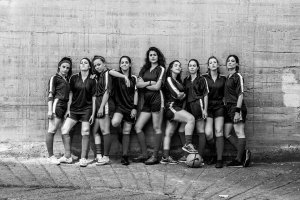 Fantastiko Theatro presents the play “The Wolves” by Sarah DeLappe which centers on the experiences of high school girls through their weekly Saturday morning pre-game soccer warmups. The play was a finalist for the 2017 Pulitzer Prize for Drama.

The Wolves is set in an indoor soccer facility. Each scene depicts the nine teenage girls who make up the Wolves, a soccer team, warming up before their game each week.

The first scene opens with discussion of a murderous Cambodian dictator, and conversations stem from there. Overlapping dialogue illustrates an atmosphere where each group of girls have their own, specific conversations while still chiming in on the main topic. These spin-offs include period gossip, talk of boyfriends, their coach’s obvious hangovers, and speculations about the new girl, #46, who is said to live in a “yogurt” (a yurt) and repeatedly burst in conversations at the most inappropriate times such as mentioning how the team’s striker, #7, had an abortion.

In every scene, the girls are going through a stretching routine led by #25. This is one of the only repetitive actions, besides #7’s constant use of the word “fuck” and the goalie, #00, suffering from social anxiety attacks and consequently running outside to vomit. The girls sometimes continue their gossip from the previous week, bringing new drama and topics of conversation. #46 slowly begins to fit in and most girls seem to grow more comfortable with each other as the season progresses.

A ski trip taken by #7 and #14 before the second-to-last game leaves the team suffering from injuries and internal drama. #7 suffers a season-ending injury, which forces #46 to step up. She excels, and is even scouted along with two other girls while the rest watch enviously from the sidelines. #7 and #14 bring their ski trip squabble back to the field as well. #14 expresses her anger towards her friend about her neglect during the trip and being left with a strange guy (#7’s boyfriend’s friend). They fight, and end the day on a terrible note.

Tragedy strikes before the final game after #14 is struck by a car and killed, which causes #00 to break down in the stadium at night, but also overcome her anxiety. The others are grieving, and assume among themselves that the others will ditch the game. With a possible forfeit looming, it feels as though the Wolves’ season will end on the lowest possible note, until all of the other girls come to the stadium one by one, allowing them to play. As they rally together, #14’s mom suddenly approaches them, giving them a delirious speech about how they have banded together in spite of everything, leaving everyone speechless.