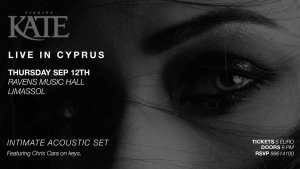 Finding Kate returns to Cyprus for a special acoustic performance.

An evening with Finding Kate on vocals & Chris Cara on keys, playing an intimate, acoustic set. The show will feature material off her debut album ‘If I Fall’ and her latest single ‘I Feel Bad’, as well as new, unreleased material.

BIO
Kate Pavli, otherwise known by her stage name “Finding Kate” is an Alternative/Rock solo artist based in London. Hailing all the way from Australia and Cyprus, this rocker proves she is a force to be reckoned with. Her powerful vocals, melodic songs and dark music separate her from the crowd. Since the release of her debut album ‘If I Fall’ in 2016, she has been a quiet force, honing her craft, playing shows and preparing for the next chapter.

Drawing influences from the Rock, Alternative and Pop genres, ‘I Feel Bad’ is a clear example of what is to follow from Kate.