Walking under the stars: Cello & Piano 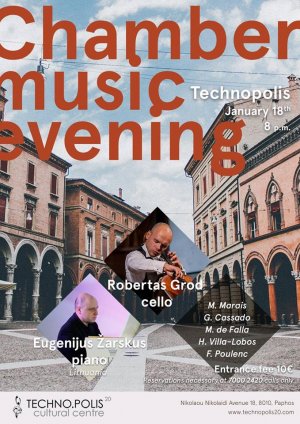 Cellist Robertas Grod together with his friend piano player Eugenijus Zarskus is inviting you a chamber music evening at Technopolis 20 in Paphos, on Tuesday, 18th of January 2019, at 8pm.

The audience can enjoy pieces written by composers from Brasil, Spain and France: the nostalgic Brazilian aria by H. Villa-Lobos, a piece by the Spanish M. de Falla full of authenticity and temperament, the variations by M. Marais that are maybe some of the oldest in Europe with La Folia theme, a piece by G. Cassado, cellist from the 20th century known for his virtuosity and finally a delicate French humour by F. Poulenc that will make you smile.