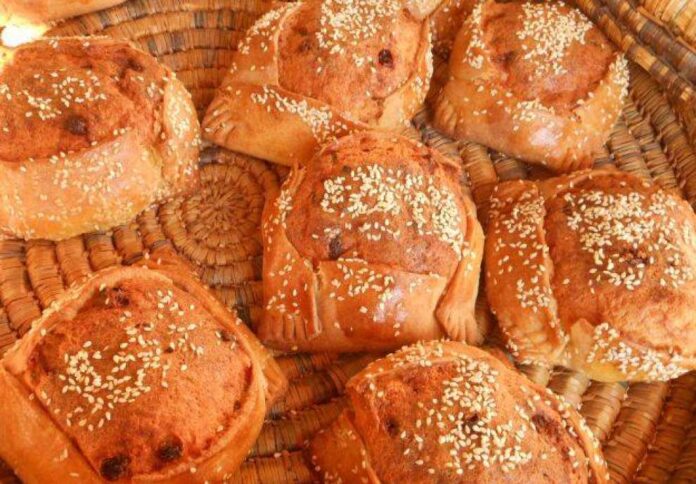 The custom of “Flauna” dates back to the 19th century and according to tradition was made on Holy Saturday and then transported to churches and consumed after the Resurrection. Nowadays, housewives usually make them on Maundy Thursday.

“Flaunes” is a food which in ancient times and even today, was used for the transition of believers from fasting to the consumption of non-fasting foods, without the risk of various stomach disorders.

The main ingredient of the traditional “Flauna” is the special cheese for flauna and eggs. The classic flauna contains cheese and halloumi. In recent years, however, many have shown a particular preference for anari, because it is a healthier choice and the process of preparing the dough is less time consuming.

The process of making the flauna starts from the previous day, with the grating of the cheeses to become the famous “foukos” or “fokos” or “foutzia”, in simpler words the filling. Then add the eggs, the yeast, the semolina to the cheese and mix them. They also add various scents (mahlep, mint, cinnamon, mastic) and raisins to the seal for a sweeter taste. The housewives leave the seal all night to “enter”, ie to inflate.

The next day the dough is prepared for the flauna leaf, after first the yeast has been shaken (regenerated) from the previous night. in small pies, it is filled with the seal and the edges of the pie are folded on the sides. Its shape varies from square, triangle or even round. After the preparation process is over, the final step is the baking of the flauns. The housewives place the flauns on plates or traditional chests and bake them either in their neighborhood oven or in a wood oven.

However, in some villages of Paphos, the so-called “Paskies” are prepared, which are slightly different from the other flauns. Paskies are round flaunes, about the size of a palm, and are stuffed with pieces of meat, usually fried with spices.