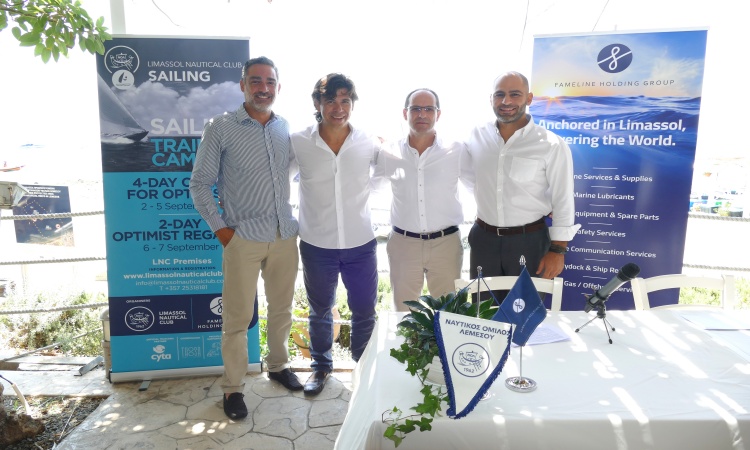 With the strategic collaboration, both parties aim to further develop the sport of sailing in Limassol, and to encourage young people in becoming acquainted and involved with sailing as it is the only sport that Cyprus has been awarded with an Olympic medal.

In his introduction on behalf of Fameline Holding Group, the Strategic Planning Director, Mr. Stephanos Stephou, said: “After 5 years of a successful collaboration with the Limassol Nautical Club in the framework of ‘’Agonas Eleftheria Sailing Race’’, we decided to join forces to support our  common vision: to evolve  the sport of sailing in Limassol while encouraging the athletic spirit and to motivate young athletes hoping to see more success stories, following the steps of the Olympic Champion Pavlos Kontidis”.

Mr. Stephou also noted: “Being fully aware of the responsibility and necessary planning, Fameline Holding Group in cooperation with Limassol Nautical Club set sails to the realization of our common mission:

On behalf of the Limassol Nautical Club, the General Manager, Mr Evripides Manoullos, mentioning LNC’s medium-term plans, highlighted that “Today, LNC’s Sailing Department yearns for an auspicious future through structured planning and aspires the ever betterment and establishment of this Department.

This cooperation will be based on the following five aspects:

The three-year strategic plan is being initiated in September with the 1st Fameline Sailing Camp related to the Optimist category and being held between the 2nd and 7th -September at LNC premises. Children will have the opportunity to experience and learn the secrets of the sport by the world-renowned coach of the Optimist class, Mr. Antonis Drosopoulos. At the same time, laser class athletes of LNC will have the opportunity to be trained by the Olympic and World Champion of LNC, Pavlos Kontidis. Daily lectures by distinguished athletic scientists will be featured during the Fameline Training Camp.

Dr. George Panagiotou, Chairman of LNC while explaining LNC’s future plans, noted that “Being fully aware of our role regarding the society and the athletic community, we have formulated and we are adamant to implement a structured development plan based on the following:

The above objectives could not have been achieved if we did not have the assistance of our stakeholders as part of their corporate social responsibility. One of the stakeholders who has responded to our call is the Fameline Holding group, which we warmly thank for its social sensitivities and we also wish to stand as a group worthy of their expectations”

Mr. George Seraphides, General Manager of Fameline Holding Group, thanked Limassol Nautical Club for the opportunity to make a practical contribution to the development and evolvement of the sport of sailing.

Fameline Holding Group (FHG) is a vast network of business organisations composed of 38 companies active across a variety of sectors – chiefly, maritime, and oil and gas, alongside new areas of exploration, including healthcare and ICT. FHG is headquartered on the Mediterranean island of Cyprus and maintains offices in more than 10 countries.

Limassol Nautical Club being established in 1962, keeps contributing to the evolvement of sailing in Cyprus and abroad. The club won awards at the sports of Sailing, Swimming, Rowing, Canoeing – Kayaking. At the same time the LNC makes important progress in the Water Polo and indents to focus on the Triathlon sport in September. It is worth mentioning the conquest of the Olympic medal by Pavlos Kontidis as a significant milestone in the history of Limassol Nautical Club.