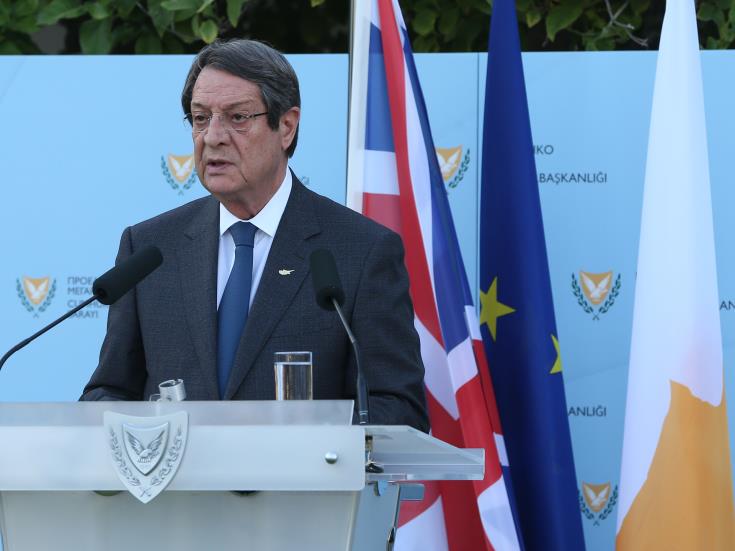 President of Cyprus Nicos Anastasiades spoke on Tuesday of a “historic day” for residents and property owners in the British Bases, while announcing the next important stage in the implementation of a bilateral arrangement, reached in 2014 between the Republic of Cyprus and the United Kingdom, on the regulation of non-military development in the British Bases.

Speaking at the Presidential Palace, in the presence of British High Commissioner Stephen Lillie, the President said that the agreement opens up significant prospects for economic growth. At the same time, the arrangement is another tangible proof of the excellent relations between the Republic of Cyprus and the UK, he underlined.

The two sides also issued a joint statement, noting among others, that implementing the arrangement represents “a significant step forward in strengthening and deepening even further our cooperation and bilateral engagement.”

“After 60 years of negotiations and as a result of the resoluteness of the governments of both countries, the agreement that was reached on January 15, 2014, between the then Prime Minister David Cameron and myself is being implemented today” the President said in his address.

The agreement significantly revises the status of properties, by fully restoring the rights of residents and property owners, he went on.

He also said that a significant portion of the territory within the British Bases is now open for development purposes as planning zones are introduced. “1,800 hectares of land, about 860 in the area of Akrotiri and another 930 in the area of Dhekelia are now part of development zones” the President added.

The arrangement provides that residents and property owners in the British Bases will have equal rights with the rest of the citizens of the Republic of Cyprus, as the same rules apply in relation to buying and developing properties by Cypriots, European citizens and citizens of Third Countries, he added.

It is also possible to license other smaller developments, under certain conditions, such as gas stations, restaurants, and other types of development, he added.

President Anastasiades admitted that the procedure to implement the agreement has been relatively time-consuming, he pointed however to its complex nature, noting that there were several particular issues the two sides needed to tackle effectively.

He stressed, moreover, the positive economic impact of the agreement, not just for those residing in the British Bases, and said that the agreement is the biggest change in land use and development within the Bases since the establishment of the Republic of Cyprus.

With hard work and constructive cooperation between the Republic of Cyprus and the United Kingdom it was possible to overcome any obstacles, through mutually beneficial solutions, having as our prime concern the prosperity and the prospects opening up for residents and property owners in the British Bases, the President said.

Among others, the President said that the agreement demonstrates “the exceptional level of bilateral relations between the Republic of Cyprus and the United Kingdom, which are based on strong historical ties, both on the intergovernmental level, as well as between the two peoples.”

President Anastasiades finally reiterated the determination of the Republic of Cyprus to continue cooperating closely with the United Kingdom after Brexit.

British High Commissioner Stephen Lillie referred to the benefits arising from the arrangement for 12,000 Cypriots living in the Bases.

“These discussions have been complex, but they show the commitment of both our countries to developing our bilateral ties, and finding new areas of co-operation” said Lillie.

“This agreement means that, as far as possible, residents in the Bases will now enjoy the same rights as Cypriots living in the Republic to sell and develop their land” he added.

“This will bring very obvious benefits to the 12,000 Cypriots who live in the Bases.  At a time when coronavirus is generating fear and uncertainty about the livelihoods of communities the world over, I take pride in the fact that we have worked together to deliver a change that will have a real and positive impact on people’s prosperity” the British High Commissioner concluded.

From his part, Major General Rob Thomson, Commander British Forces Cyprus and Administrator of the Bases, said that it is really good news that we will soon be able to allow more development opportunities to the many Cypriots who live within the Bases, while safe-guarding the UK’s operational work here, work that makes such an important contribution to Western Security. “This bilateral agreement on Non-Military Development underlines the closeness of the UK-Cyprus partnership” he said.

According to the Joint UK-Cyprus statement, the UK Government and the Government of the Republic of Cyprus have announced the next important stage in the implementation of the bilateral arrangement reached in 2014 on the regulation of non-military development in the Sovereign Base Areas.

The Department of the Environment of the Republic of Cyprus and the Administration of the British Bases will publish on Wednesday the draft policy statement, zoning arrangements, and the Strategic Environmental Impact Assessment (SEIA) report relating to the arrangement, it is added.

According to the statement, the publication of the SEIA report will commence a 35-day public consultation phase, which is the essential first step towards allowing, in accordance with the provisions of the final Policy Statement and the zoning arrangements, residential and commercial land development in the Bases on the same basis as in the Republic.

“The implementation of the Arrangement reflects the excellent level of the bilateral relations between our two countries and governments.  In the 60th year of diplomatic relations between the UK and the Republic of Cyprus, it represents a significant step forward in strengthening and deepening even further our cooperation and bilateral engagement which is based on common values, principles and ideals, as well as the strong bonds of friendship and historical ties that exist between our two countries and peoples” it is added.

It also shows our collective commitment to securing and promoting the prosperity of the residents and communities living in the Base Areas, while ensuring that the Bases will continue to function in accordance with the relevant provisions of the Treaty of Establishment, the Joint statement concludes.

It should be noted that the Non-Military Development Arrangement was signed by former Foreign Ministers Ioannis Kasoulides and William Hague in 2014, and reconfirmed in a written statement agreed between President Anastasiades and former British Prime Minister David Cameron the same year. Since then, negotiations have been ongoing on the details of how the arrangement would be implemented. This phase has now been concluded.