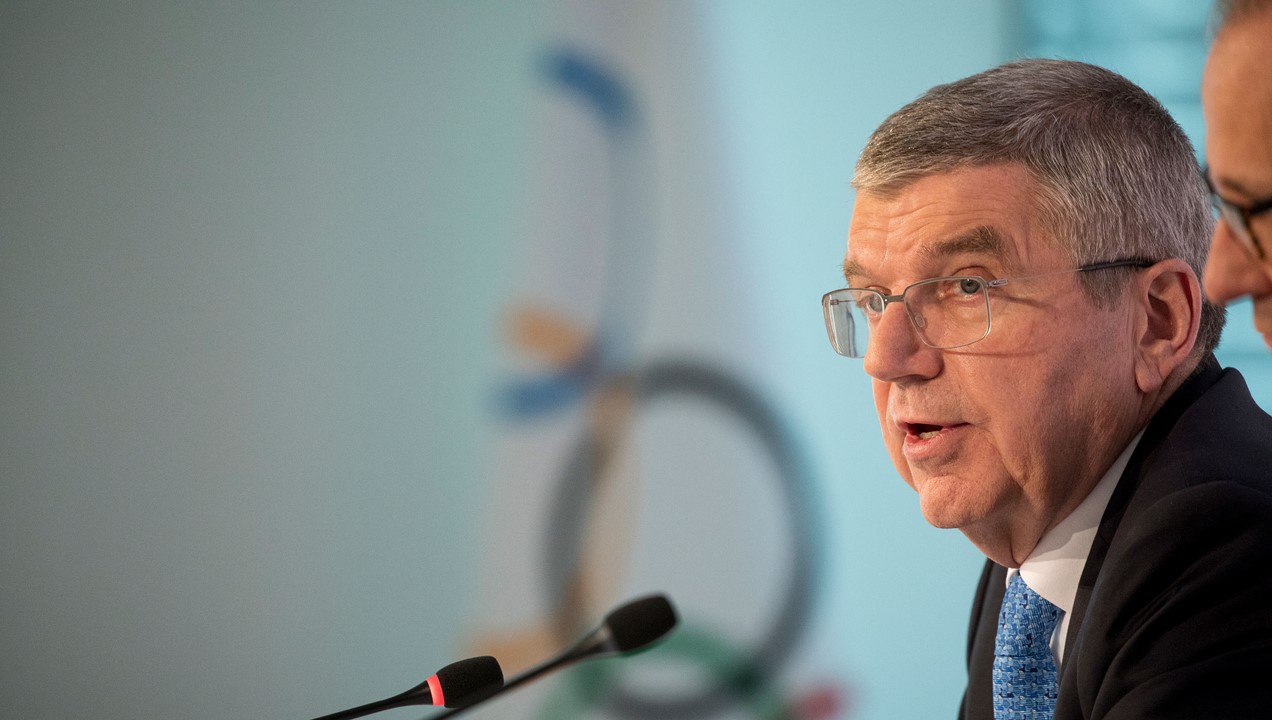 We at the IOC, but I can also say after the phone call with Prime Minister Abe, our Japanese partners and friends, we are not only aware of the seriousness of this global pandemic, but also, and even more importantly, what it is doing to people’s lives. We are in fact very worried about the latest developments and the alarming figures we got in the last couple of days. As far as, for instance, Africa is a concern, we can see figures which are showing that we are at the beginning of the outbreak of the virus. We also have very alarming figures in South America and in Oceania, and in many other parts of the world. This realisation led to the meeting of the IOC Executive Board on Sunday. Right after – Sunday evening and Monday – we observed more alarming figures, more international travel restrictions.

Due to the growth of the pandemic and the spread, later on Monday, the World Health Organization raised the alarm to the world, by saying that the spread of the virus was accelerating, and that they wanted to address the G20 leaders. We then agreed on a phone call between Prime Minister Abe and me scheduled for today. During this phone call, we agreed, given these circumstances, on the following: that the Games of the XXXII Olympiad in Tokyo and the Paralympic Games, must be rescheduled to a later date beyond 2020, but not later than summer 2021, to safeguard the health of the athletes, and everybody involved in the Olympic Games, and the international community. We also agreed that the Olympic flame will stay in Japan, as a symbol of our commitment, and also as a symbol of hope. We will also keep, for these symbolic reasons, the name Olympic Games Tokyo 2020.

We both expressed the hope that in the end, next year, these Olympic Games Tokyo 2020 can be a celebration of humanity, for having overcome this unprecedented crisis of the COVID-19 pandemic. In this way, the Olympic flame can really become the light at the end of this dark tunnel the whole world is going through together at this moment, and which we do not know how long it will be. Let me add that, in the meantime, after the phone call [with Prime Minister Abe], we had an IOC Executive Board meeting, where the Executive Board members approved this agreement between Prime Minister Abe and me. The President of the International Paralympic Committee, Andrew Parsons, was also invited and, on behalf of the International Paralympic Committee, supported this agreement.

WITH REGARD TO THE DATES, HAVE YOU INDICATED THAT IT WILL BE HELD IN THE SUMMER, OR ROUGHLY IN THE SAME TIMEFRAME AS THE 2020 OLYMPICS WAS SCHEDULED? HAVE YOU ADDRESSED THE QUESTION OF POSSIBLE ADDITIONAL COSTS LINKED TO THIS DECISION?

The Prime Minister and I did not discuss the timeframe. This will be up to the Coordination Commission and the Organising Committee. This is part of their discussions about the scenarios. There are a lot of pieces in this huge and very difficult jigsaw puzzle. The Olympic Games are maybe the most complex event on this planet, and getting everything together cannot be done in just a phone call between the two of us. We have to rely on the work of the Coordination Commission in cooperation with the International Federations in particular, but also with many other partners. This is really a big challenge. Finances have not been discussed, because it’s about protecting human lives, and financial considerations cannot take priority. Prime Minister Abe has declared the full support and commitment of the Japanese government to make this solution work and to have successful Games in the end. On my side, I have declared the full commitment of the IOC to come to this positive result.

YOU MENTIONED THE FIGURES FROM THE WORLD HEALTH ORGANIZATION AND THE ADVICE CHANGING VERY MUCH OVER THE WEEKEND, BUT YOU HAD INDICATED IN AN INTERVIEW GIVEN TO THE NEW YORK TIMES THAT YOUR THOUGHTS WERE CHANGING. DID THE ATHLETE REACTION LAST WEEK FACTOR INTO CHANGING YOUR VIEWS, OR WHAT INFLUENCE DID THAT HAVE IN ARRIVING AT THIS CHANGE OR IN CONSIDERING POSTPONEMENT?

I think you have seen from my letter to the athletes that I feel very much with them and that we all have to address the situation of uncertainty, which is clearly affecting their nerves. This is a situation we have never been in nor wanted to be in. This is, therefore, for the athletes, an extremely difficult situation in many parts of the world. We have also had a lot of understanding from many athletes across the world. Therefore, our approach was always to adapt to the situation at the right moment and, then, as soon as possible.

We have seen, if you look at this overall development, a clear shift in the focus.

At the very beginning, the question was whether Japan could offer safe conditions for welcoming the athletes of the world. At that point, we had growing confidence in the developments in Japan, seeing all the measures being taken, seeing the figures, and we had the confidence that, in four-and-a-half months, these safe conditions could be offered.

But, then, we had this big wave coming from the rest of the world and these very, very worrying developments, in particular in the last few days. Africa is obviously at the beginning of the spread of the virus, and the World Health Organization said a couple of hours ago that Africa has to prepare for the worst. We see the numbers going up in many other parts of the world.

This is why, following the principles we established to always safeguard the health of the athletes, contribute to the containment of the virus and care for the people affected by the virus all over the world, we took these steps, the results of which you can see now. If you are interested, to give you some figures about what accelerating rapidly means: it took 67 days to reach the first 100,000 cases. Then, after 11 days, we had 200,000, and four days later, 300,000. We are now above 375,000. They are all over the world, and these are just the reported cases.

DO YOU THINK THIS IS THE WORST CRISIS OF THE OLYMPIC MOVEMENT SINCE THE SECOND AND FIRST WORLD WARS, WHICH FORCED THE IOC TO CANCEL THE OLYMPIC GAMES?

Comparisons are always dangerous because they can be interpreted in very different ways. To compare a postponement of the Games, because you are asking about the Games, with a cancellation of the war, is, I think, not the right thing to do considering the human suffering created by wars and what a war brings with it over so many years. What we can say is that it is an unprecedented crisis for humankind. We have never seen such a spread of a virus worldwide before. Therefore, it is also an unprecedented challenge for the Olympic Games. This is why, to my knowledge, this postponement of the Games is a first-ever in Olympic history.

THE INTERNATIONAL FEDERATIONS DEPEND ON OLYMPIC MONEY TO SURVIVE. MANY OF THEM ARE ALREADY IN TROUBLE. ARE THEY GOING TO SURVIVE WITHOUT OLYMPIC MONEY IN THE NEXT FEW MONTHS? DO YOU PLAN TO HELP THEM?

As you may understand, we did not discuss this topic with Prime Minister Abe today. At this moment, it is about organising and committing to the organisation of the Olympic Games Tokyo 2020. The principle and the criterion are to safeguard the health of the athletes and everybody involved and to contribute to the containment of the virus. Every other particular interest of anybody else should come after that. This is about human lives and the health of human beings.

The concern and the commitment of the IOC are to organise Olympic Games in an environment and in a way which safeguards the health of all the people involved, of every participant in any capacity. This commitment will not change, and this principle will guide us in all the decisions we are taking, as it has guided us in all the decisions that we have been taking in the recent past.

My visit to Japan in the month of May was discussed between the Prime Minister and me during the telephone conversation. I will come to Japan on the planned dates, and I will be happy to be in Japan to show, through my presence, our full commitment to the success of the Olympic Games Tokyo 2020 and to express our gratitude to the Organising Committee, to all levels of government, and to all Japanese people for the great work they have been doing so far in preparing these Olympic Games. Also for their enthusiasm for these Games, for their support for these Games, and to assure them that we are fully committed to lead them, finally, to success, which, as Prime Minister Abe and I have stated before, will be a celebration of humankind to have overcome this unprecedented crisis of the coronavirus.

THE ATHLETICS AND SWIMMING WORLD CHAMPIONSHIPS WILL TAKE PLACE NEXT YEAR AS WELL. WILL THIS PROVE TO BE A CHALLENGE IN TERMS OF ORGANISATION IF THE OLYMPIC GAMES WERE TO TAKE PLACE DURING THE SUMMER OF 2021?

These are exactly the reasons why on Sunday we had decided that we need at least four weeks to address these questions. These events are not the only ones. The Olympic Games is the most complex event in the world. Bringing 11,000 athletes together from 206 National Olympic Committees plus the IOC Refugee Olympic Team; having the Organising Committee on board; the supporters, the sponsors, the broadcasters; being aligned with the International Federations, the National Olympic Committees. I’m just naming a few of the pieces of this jigsaw puzzle.

This takes some time and the Coordination Commission has already started the work. There has already been, since Sunday, contact with a number of stakeholders, and we are confident that they will come up with a good result to make these Games the success we all want them to be. I’m sure that the International Federations, together with their athletes, also have the greatest interest in being able to compete in the Olympic Games.