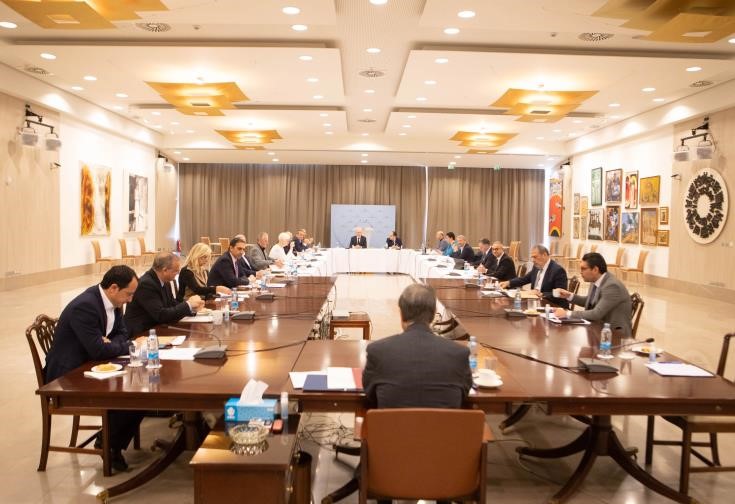 For the time being the government of Cyprus does not intend to impose further drastic measures such as a curfew in order to deal with the coronavirus outbreak, Government Spokesperson Kyriacos Koushos has said in statements after a meeting of parliamentary political party leaders chaired by Cyprus President Nicos Anastasiades, on Thursday.

The country`s political leadership, both government and political parties, in a spirit of mutual understanding exchanged proposals which will be put down in paper and then sent to Parliament next week to be voted, he said and urged citizens to abide by the advice of staying at home, sending a message that “united in the battle against the coronavirus we will be victorious.”

In statements, Koushos said that the the meeting, that took place at the Presidential Palace, was “extremely productive,” adding that President Anastasiades briefed political party leaders over the government`s more general policy in dealing with the coronavirus outbreak and competent Ministers informed them of individual measures in place and their ministries` plans.

The Government Spokesperson noted that all political party leaders spoke and contributed with their own suggestions, in a spirit of absolute mutual understanding on the principles of the proposals which have been submitted, adding that it was agreed that both governmental and political party proposals would be put down in paper and sent to the parties as soon as possible.

He further pointed out that it is not expected that there will be any disagreement and that the Parliament plenary will be in session next Tuesday or Wednesday so that the Bills which are necessary for measures to be implemented, can be voted. House of Representatives President Demetris Syllouris also confirmed that the plenary would probably take place on Tuesday or Wednesday next week. In a brief statement to the press, he said that a plenary session initially scheduled for tomorrow is now postponed, adding that “it is worth it to delay for three or four days in order to have a complete package of measures.”

In his statements, Koushos noted that “all political leaders expressed their appreciation and their thanks to all public officers who are taking part in the effort against the coronavirus spreading,” he said, adding that “United we will be victorious.”

At the same time he appealed on behalf of the entire political leadership to citizens to be self – disciplined in order to protect their families, relatives and the people in general.

Asked whether the measure of imposing a curfew was discussed, Koushos said that it hadn`t. For the time being, he noted, there is no decision for imposing such a measure.

“We do not make a secret of it however that there are plans for all possible scenario but this will be depend on developments,” he added, stressing that the government is taking decisions which are based on the advice of experts.

At this stage, he continued, there is no intention of implementing further drastic measures, which does not however rule out the possibility of issuing more decrees, which will not contain drastic measures.

Asked about the matter of private sector doctors and their contribution to the effort against the coronavirus, he said that a plan is in place as to where each doctor will serve, but did not wish to go into further details, adding that Minister of Health Constantinos Ioannou is expected to give further details on that matter.