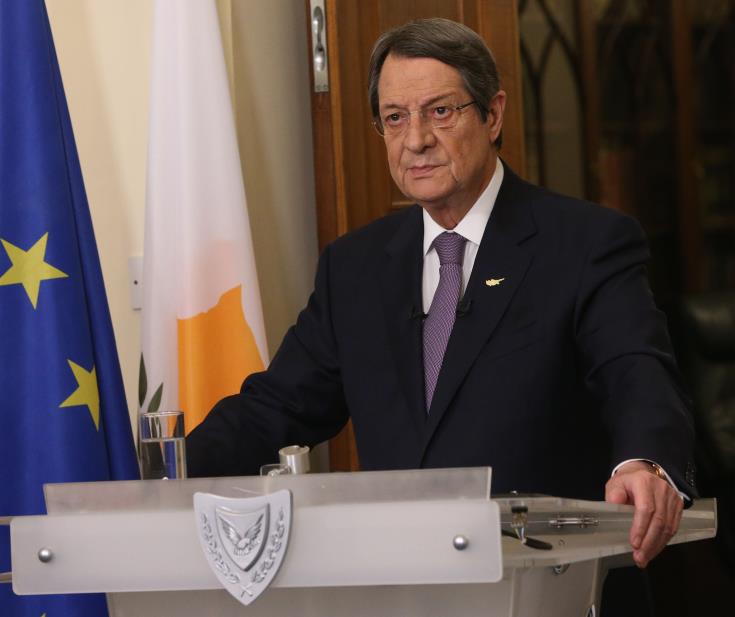 President of the Republic of Cyprus Nicos Anastasiades  has announced stricter measures in a bid to lessen the spread of the coronavirus, including barring entry into the country by anyone other than Cypriot citizens, legal residents of the Republic of Cyprus, European nationals or third country nationals working in the Republic and nationals  from countries who are on a diplomatic service or mission based on bilateral or international conventions.
He also said that the government will announce a package of economic measures to support employees and employers as well as businesses facing the repercussions of the coronavirus crisis.
At the same time, the President remarked that all the citizens have a duty to implement the measures announced on Friday.
In a televised address, President Anastasiades said he is aware of the strong feelings of concern and insecurity everyone has as a result of the rapid spread of the new epidemic that is affecting all of humanity.
Appealing to all Cypriots and those who are legally living in the Republic of Cyprus, President Anatasiades conveyed the government’s determination to continue taking measures necessary to effectively lessen the repercussions of the existing crisis.
Our prime concern, he added, is the protection of public health and to secure the economic survival of employees, small and medium-sized businesses and vulnerable groups of the population.
The President reminded that the Ministry of Health has started taking measures since January 23 regarding those arriving from China, suspended the opening of four crossing points across the island’s ceasefire line in efforts to prevent a coronavirus outbreak and more measures as well as travel advice by the Ministry of Health on the 6th, 9th, 10th and 12th of March, regarding persons’ travels and categorizing their countries of origin.

President Anastasiades said that no measures, however strict, are enough to prevent or protect the entirety of the people if there is no personal and collective responsibility and discipline towards all other measures.
He said the measures were taken following recommendations by the World Health Organization and the ECDC and are clearly instructions for implementation.
“No one is above or can be excluded from implementing all that has been decided”, the President underlined.
President Ansatasiades called on parents and urged them to be strict and not satisfy their children’s wishes while appealing to the youth, he urged them to appreciate that non-compliance to the measures is a dangerous illusion.
“The dangers lurk not only for them but especially their loved ones, brothers, sisters, parents, grandparents”, he added.
President Anastasiades called on Cypriots living overseas or in Cyprus to avoid unnecessary travel.

He also urged people to turn to religion to draw strength.

Noting that the WHO announced on Friday that Europe is the epicenter of the pandemic, President Anastasiades said that in Cyprus a total of 19 confirmed cases have been reported in the last four days.
For this reason, in addition to the measures already announced, the government has decided:
As from15 March and for a period of 15 days in the first phase, the prohibition on entry of any citizen – regardless of nationality – who does not fall into the following categories:
Cypriot citizens, legal residents of the Republic of Cyprus, European nationals or third country nationals working in the Republic, nationals  from countries who are on a diplomatic service or mission based on bilateral or international conventions, isolated cases of European nationals or third country nationals for unavoidable professional obligations, provided that they have obtained authorization from the relevant ministry as well as European nationals or third country nationals who are attending educational institutions in Cyprus.

Crossing at the crossing points between the government controlled and occupied areas will be allowed only for persons who are Cypriot citizens, Greek Cypriots and Turkish Cypriots, those living legally in the free areas and nationals of countries who are on a diplomatic mission or service in Cyprus.
He also said that public and private schools and educational institutions on the island will remain closed until the 10th April.
President Anastasiades said the measures do not affect commercial activity in the country, “as we do not impose any restrictions on imports and exports, including essentials”, therefore unnecessary concern is not justified.
The President further underlined that, in addition to protecting the health of the people, it is also important to secure income and work by supporting workers, businesses and economically vulnerable groups.
The financial performance of recent years, the President added, allows us to take decisive action to support employees and employers and those who will be affected by the crisis.
For this reason, the government will present a complete programme to support the economy, based on the dialogue already taken place with the parliamentary parties and social partners.
President Anastasiades thanked the political forces and social partners who contributed to formulating the measures that will be announced.
He further paid tribute to health professionals for their work and expressed his sympathy to those who have fallen ill and their families and wished them speedy recovery.