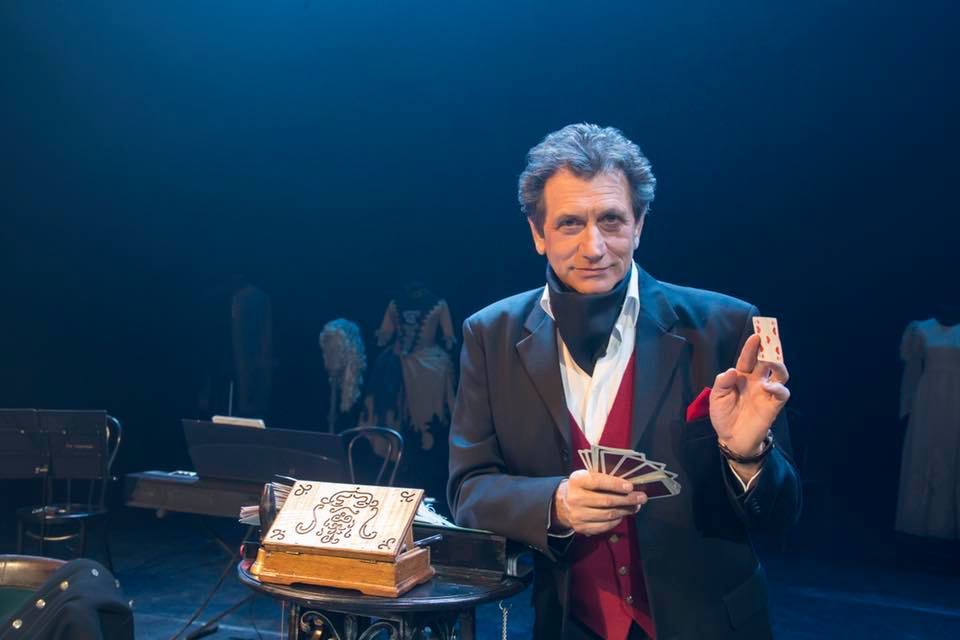 The IV International Theater Festival “Five Evenings in Cyprus” in 2020 will be held in two stages: from February 7 to 9, 2020 and from February 14 to February 16, 2020.
The main idea of ​​the Festival is to increase the prestige of Cyprus in the world cultural space, to draw attention to it in the context of a dialogue of participants from different countries, to strengthen and develop ties between Russian-speaking foreign countries, to enrich the cultural life of the island and to introduce Cyprus spectators to new trends in theatrical art. 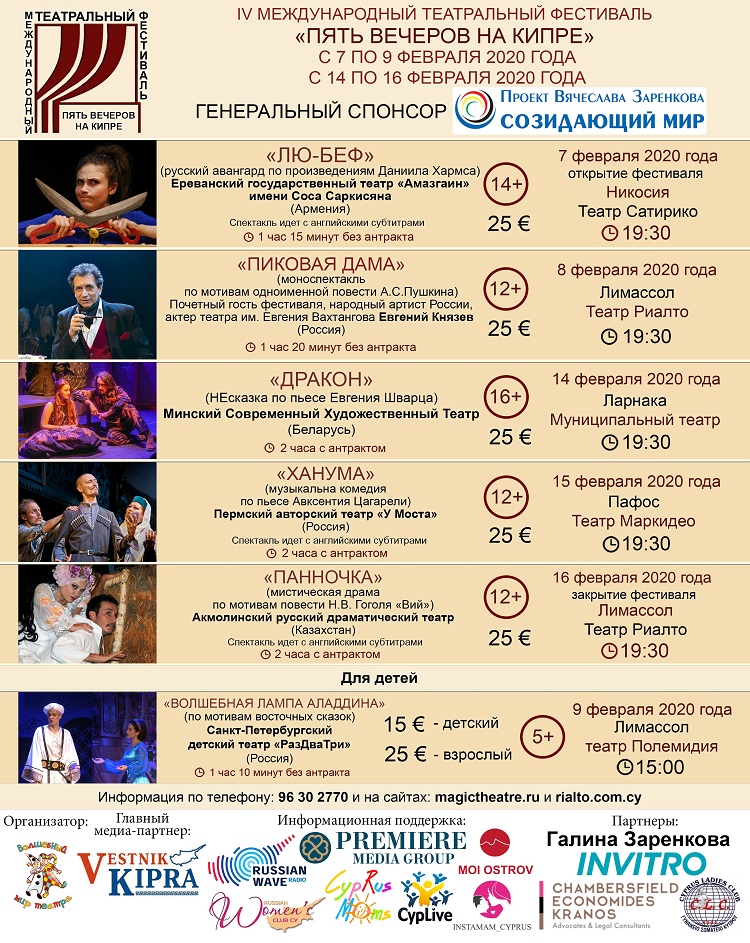 The festival is attended by professional theater groups from Russia, Kazakhstan, Armenia, Belarus.

February 8, 2020 – Limassol, the Rialto Theater.
Beginning at 19:30
Guest of honor of the festival, People’s Artist of Russia, actor of the theater. Evgeny Vakhtangova Evgeny Knyazev (Russia)
“PEAK DAMA” (mono-play based on the eponymous novel by A. Pushkin).

February 16, 2020 – Limassol, the Rialto Theater.
The closing ceremony of the festival.
Beginning at 19:30
Akmola Russian Drama Theater (Kazakhstan)
“PANNOCHKA” (a mystical drama based on the novel “Viy” by N.V. Gogol). The author is Nina Sadur, the director is O. Lutsiva.
The performance comes with English subtitles.

Also in the program of the festival: a press conference with honored guests of the festival, a discussion of performances with the participation of experts (theater critics), a theater skit.

Honored guests of the Festival:

Based on the results of the Festival, based on the audience’s vote, the winner’s performance will be awarded the “Audience Choice Award”.

Detailed information can be obtained by calling 96 30 2770 and
found on the website: www.magictheatre.ru 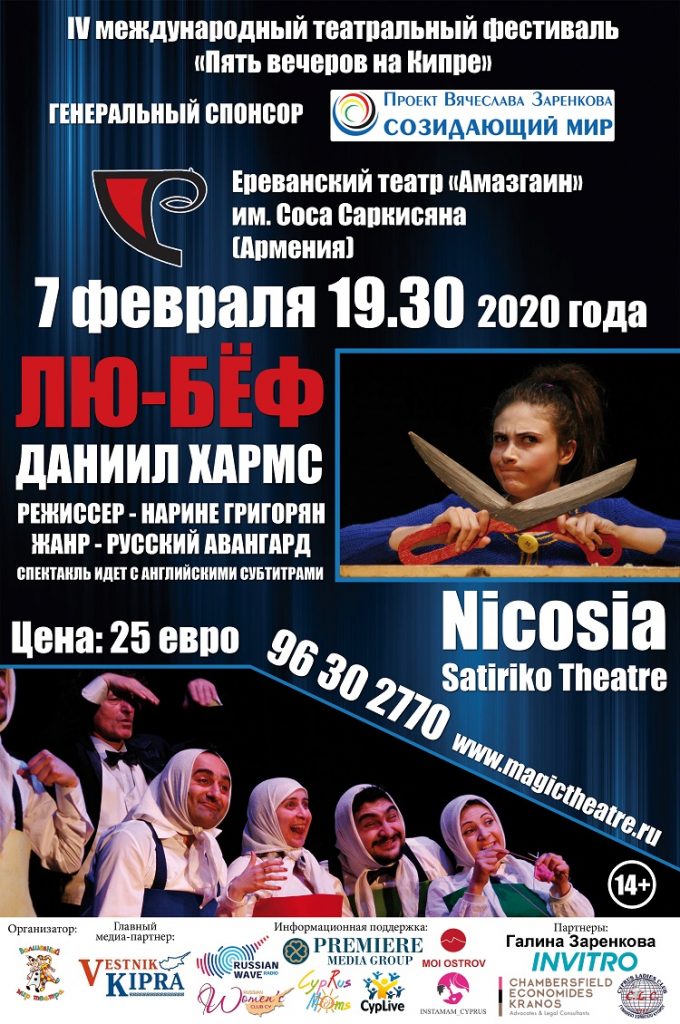 The performance of the Yerevan State Theater “Amazgain” named after Sos Sargsyan (Armenia) opens with the performance “LU-BEF” (based on the works of Daniil Kharms) IV International Theater Festival “Five Evenings in Cyprus”. Nicosia, Satiriko Theater, February 7, 2020, beginning at 19.30 .

The performance traces the fates of different people at different time intervals … Lonely, they live side by side and are not aware of the connection between them. They are confused and inactive in anticipation of the Miracle. Like lonely planets affected by gravity, they either attract each other or repel each other, not noticing that they obey the universal Law of the Universe – the Law of Love !!!!

The Amazgain Theater is a participant in numerous international theater festivals, awarded with prizes and diplomas, and has been noted by competent theater critics for the originality of the decisions of theatrical productions.
In 2017, the performance “LU-BEF” at the festival “Melpomene of Tavria” (Ukraine) received a prize as the best chamber performance, and actor Arman Navasardyan was awarded the prize for “best male role”.
In 2018, the performance “LU-BEF” was awarded the Grand Prix of the festival “San Criza” (Lithuania).

Additional information by phone: 96 30 2770
Ticket price – 25 euros.
Pre-sale at the box office of the
Satirico Theater and at: www.soldoutticketbox.com 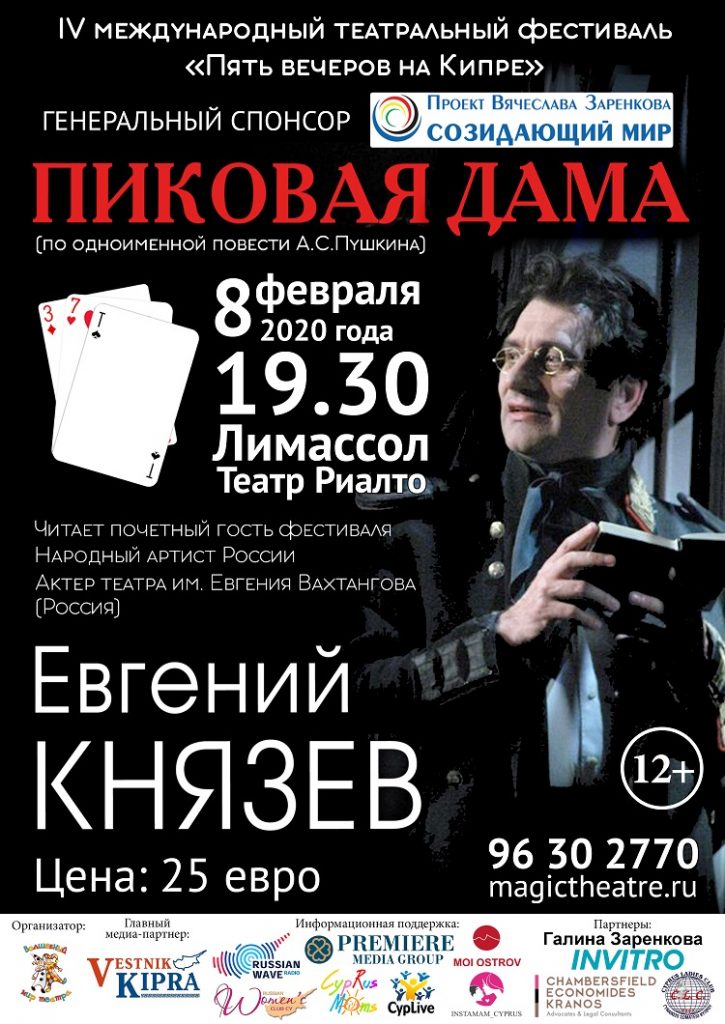 The performance-monologue of Evgeny Knyazev will take us to St. Petersburg since the time of Pushkin. We will find ourselves in a society of ladies dressed up in magnificent dresses and shining gentlemen’s manners. We will hear the story of the great wins and one tragic loss shrouded in a mystical fleur, try to find out the secret of the “three cards” from the rich Countess, visit the broken fate of the poor girl Lisa, and in the end we will witness the insanity of the protagonist – Hermann.

For an hour and a half of stage time, the Actor masterfully changes his mask, turning before our eyes either into a capricious old woman, then into her destitute pupil, or into a young man obsessed with the game.
Revived images light haze in space, sit on the seats next to the audience in the stalls and dissolve in the music of Pushkin’s words.
Is it worth challenging Fate and can a person overcome what is destined for him, is destined for above? Let’s look for answers to these questions together with Evgeny Knyazev.

Duration: 1 hour 20 minutes without intermission.
Age restriction: 12+.
Additional information by phone: 96 30 2770
Ticket price – 25 euros.
Pre-sale at the box office of the Rialto Theater and at: www.rialto.com.cy 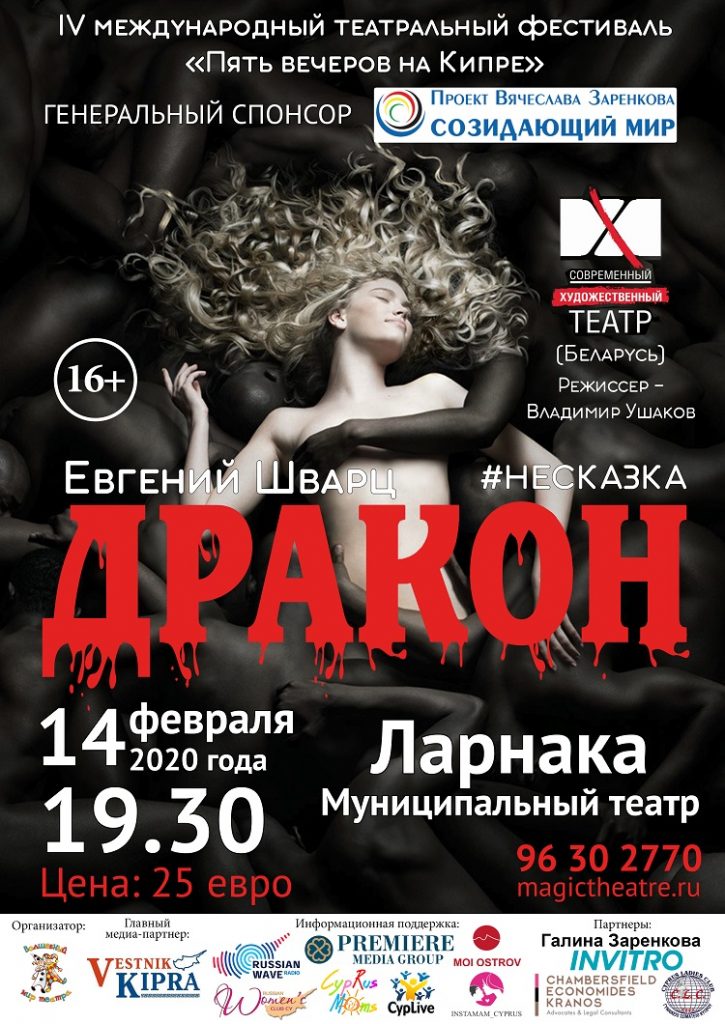 Within the framework of the IV international theater festival “Five Evenings in Cyprus”, the Minsk Modern Art Theater (Belarus) presents the play “DRAGON” (based on the play by Eugene Schwartz).

The Dragon rules the city for 400 years, annually taking one beautiful Girl. Once in the city comes the wandering knight Lancelot. He is ready to free people, but the inhabitants are against – they are used to the order established by the dictator.
Killing the Dragon is half the battle. But to bring back to life souls crippled by hypocrisy, lies and fear is not an easy task. The main character on the stage and each of those sitting in the hall will decide for himself on whose side he is and what is more important for him: momentary profit or high ideals, justice or cowardly adaptability. After all, the monster must first be defeated in itself.
All genres are woven in the play: social satire, aphoristic comedy, anti-fascist pamphlet, philosophical parable, and romantic love drama. In a word – #NON-TALE …

The performance lasts 2 hours with intermission.
Age limit: 16+.
Additional information by phone: 96 30 2770
Ticket price – 25 euros.
Pre-sale at the box office of the Municipal Theater of Larnaca and on the website:
www.soldoutticketbox.com
THE GENERAL SPONSOR OF THE FESTIVAL – THE CREATING WORLD FUND VYACHESLAV ZARENKOV. 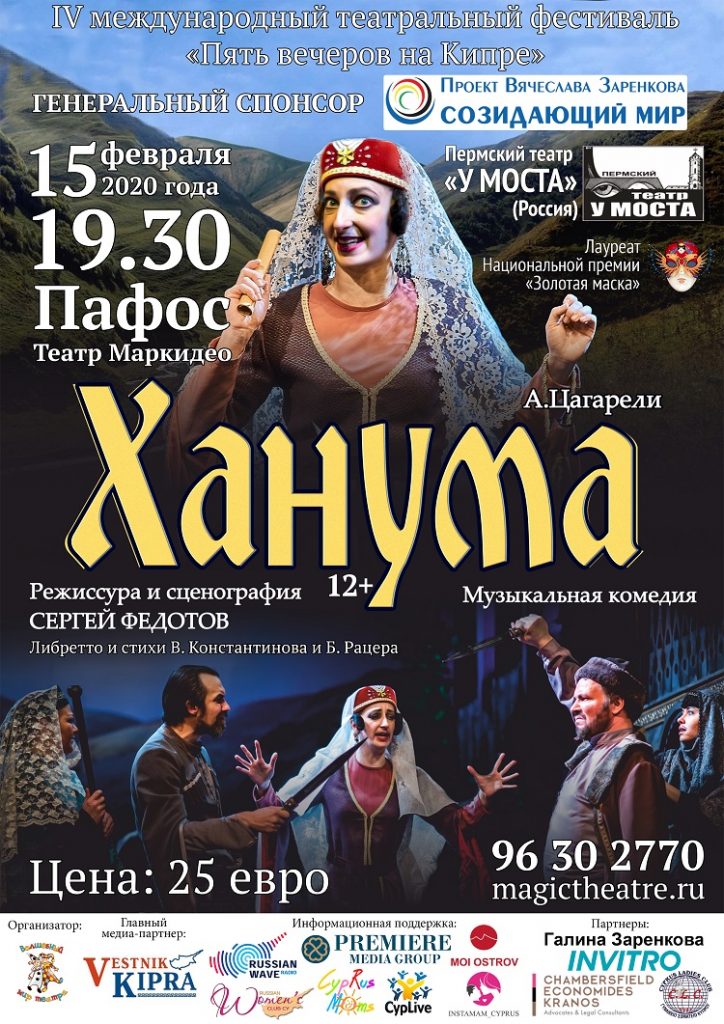 Within the framework of the IV international theater festival “Five Evenings in Cyprus”, Perm Fedotov’s Perm author’s theater “Near the Bridge” presents the musical comedy “KHANUMA” by Auxentius Tsagareli.

The rich Tiflis merchant wants to become related with an aristocratic family and therefore is going to give his beautiful daughter-in-law to marry an old ruined prince. Girl in despair – she loves her young teacher, the prince’s nephew. Two matchmakers – Kabato and Hanuma – take on the case. One promises to marry the prince to her bride and take away the title of chief matchmaker from the other. Hanuma helps her lovers and thereby destroys the cunning plans of the rival Kabato.

Toasts, songs, dances, costumes and colorful houses of ancient Tiflis will take us to Georgia of the 19th century with its cheerful mores, simple-minded people and colorful customs. The spectators on the gases come to life paintings of Niko Pirosmani, the most famous artist of Georgia.
The performance comes with English subtitles.

The Mystical Theater “Near the Bridge” – three times Nominee and Laureate of the National GOLDEN MASK Award, winner of 45 Grand Prix of foreign festivals, Champion of the Indian Theater Olympics, participant of 189 international festivals. According to the rating of FORBES magazine, the theater “Near the Bridge” is among the ten best theaters in Russia. According to the Yell.ru portal version, the U-Most Theater takes fourth place in the ranking of the best Russian theaters. The theater toured in India, Egypt, Austria, Germany, Poland, the Czech Republic, Bulgaria, Serbia, Kosovo, Bosnia and Herzegovina, Macedonia, Montenegro, Latvia, Lithuania, Estonia, Ukraine, Belarus, Hungary, Slovakia, Slovenia, Romania, Georgia, Turkey , Ireland, Israel, Kazakhstan and in many cities of Russia.

Pre-sale at the box office of the Marchideo Theater and at:
www.soldoutticketbox.com 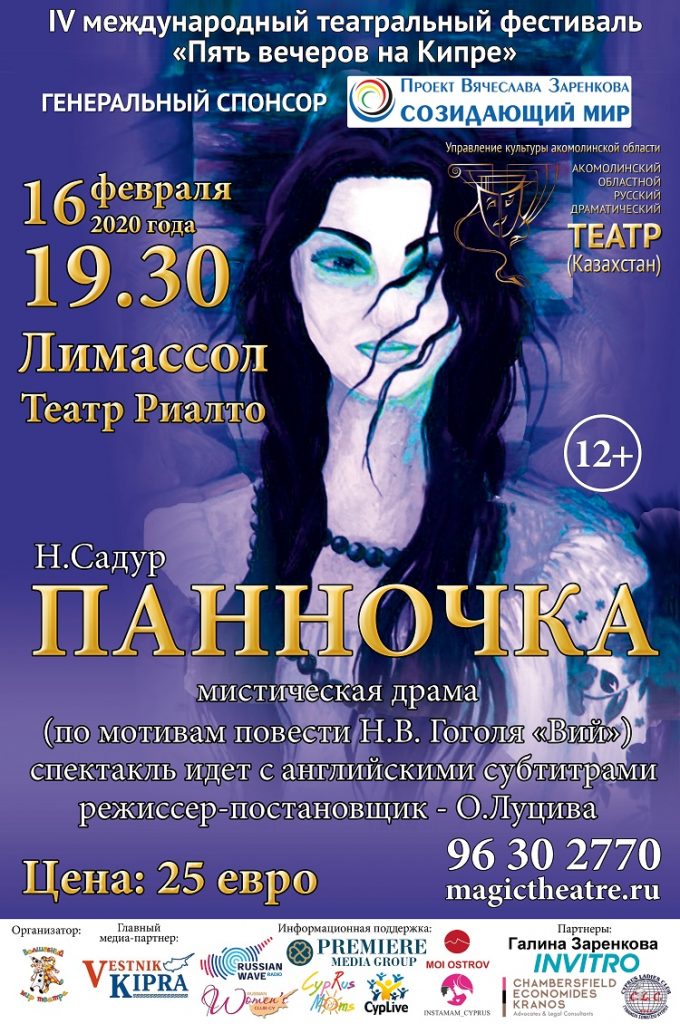 The real world in which Filosov prays is confronted with the other world in which Pannochka is bewitching. This is a duel between Her witchcraft and His faith. Confrontation Men and Women, love-hate, struggle and hugs. And only death can reconcile them, having married into Nothingness together!

Sad and scary, but at the same time a funny and exciting performance with a bright Ukrainian flavor raises deep philosophical questions. Can the spiritual world resist sinful? How to make a truly right choice between duty and feeling? Should one person be responsible for the entire universe? And where to find the strength to overcome sent over the test?
The performance comes with English subtitles.

The performance “Pannochka” of the Akmola Regional Drama Theater is a participant and winner of numerous international theater festivals.
In 2016 He was awarded a diploma of the International Festival of Russian Theaters of Russia and Abroad (Yoshkar-Ola Mari-El Russian Federation) in the nomination “For the best musical-plastic solution.”
In 2017, lead actor Andrei Vladimirov won the Best Actor nomination at the 25th Republican Drama Theater Festival (Kazakhstan).

Additional information by phone: 96 30 2770
Ticket price – 25 euros.
Pre-sale at the box office of the Rialto Theater and at: www.rialto.com.cy