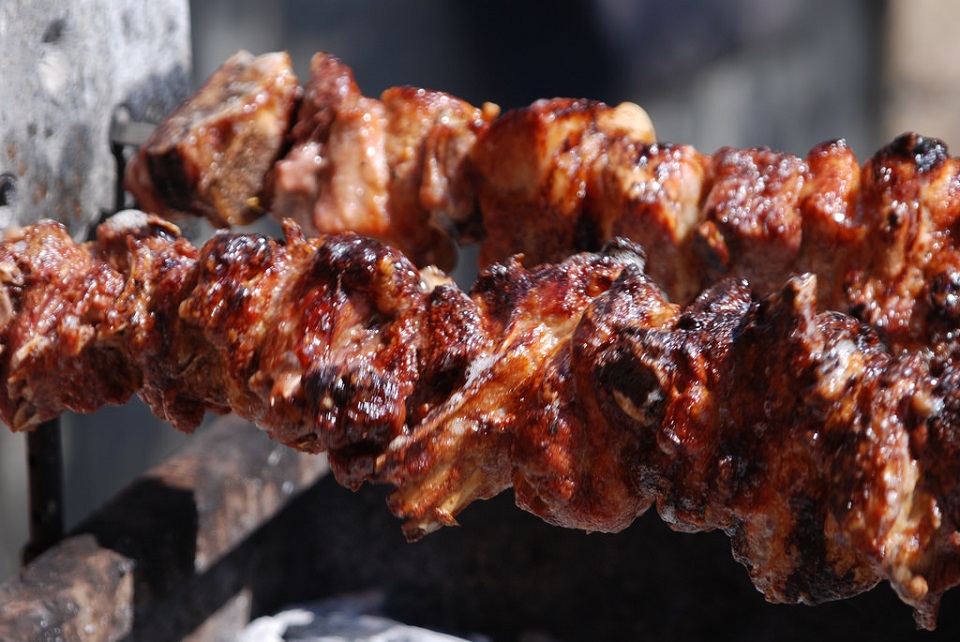 Souvla is without question the most famous Cypriot dish and one of the trademarks of Cypriot cuisine. Skewered pieces of meat that are cooked on the foukou (something like charcoal grill with a rotisserie), constantly turning around so that the meat is grilled evenly.

Place the meat in a bowl and pour the Extra Virgin Olive Oil and a pinch of Oregano.

Cover and leave to marinade for 3-4 hours

The meat is now ready to go onto the Skewer

Apply Salt and pepper to taste

Place the skewers about 12 inches above white-hot coals and leave to rotate on the rotisserie until cooked to your desired taste (1-2 hours). 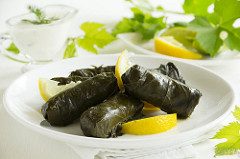 Wash the vine leaves carefully and pour them in a pot with lots of salted boiling water. Allow them to boil for 5-10 minutes (depending on how hard they are) to soften, without grinding, drain them and pour them into a bowl of iced water and ice cubes. When they cool down, you remove them and let them strain into a strainer.

Pass the tomatoes on the grater (not the finest) or grind them in the blender, with dashed motions of the motor until you chop them without making juice. Put the minced meat, parsley, onion, mint, lemon and rice in a bowl, add salt and pepper and stir the mixture well.

Separate the vineyards that are broken and spread them to the bottom of a medium, heavy saucepan (to protect the koupepia that will come in from sticking and pour half olive oil into it.) Take the solid vine leaves one by one, put them backwards the top (the side that is not glossy), with their wide side toward you and remove their crotch (if any).

Next, put 1 small spoonful stuffing in place, bring the sides of the leaves up and wrap them in cylindrical rolls. Lay them in the pot, one close to the other (when the bottom is full, make a second layer, etc.). Sprinkle with the remaining olive oil and concentrated tomato juice (Passata), and add as much water as you need to cover them.

Take a dish that fits into the saucepan and put it upside-down (with its base upside down) on koupepia like a bob, to avoid become unwrapped from removal. Put the pot in the fire, let it boil, cover it, lower the heat and simmer for 1 hour.

Tip 1 : To save time when wrapping the vine leaves, open a lot on the kitchen counter and fill them at the same time. Depending on how large the vine leaves are, add the appropriate amount of mixture. You will need to be a little bit patient or have a patient mother to wrap the koupepia for you.

Tip 2: Enjoy koupepia with a fresh salad and your favorite yogurt. 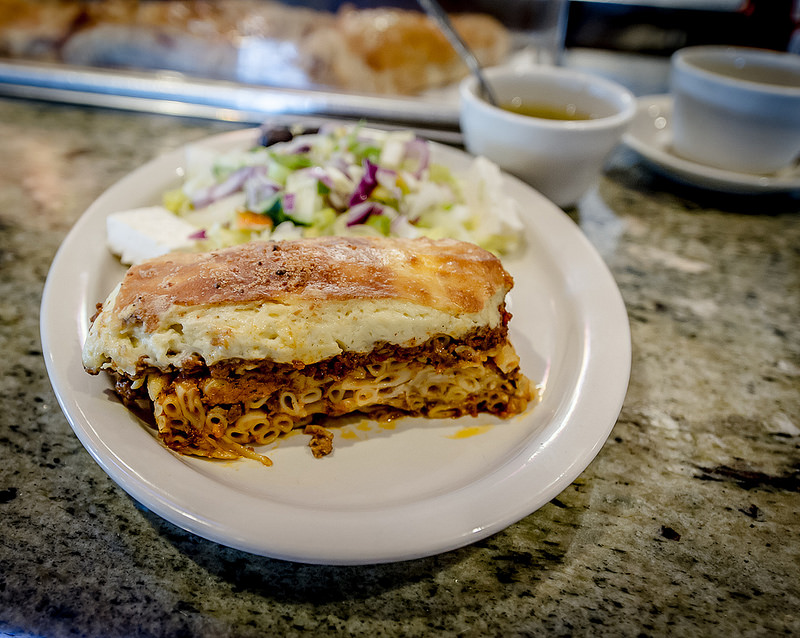 Prepare the sauce with minced meat: Heat the butter in a saucepan and cook the mince with the onion and garlic until they are golden brown, breaking the pellets if they are formed. Pour in all the ingredients except whites and add salt and pepper. Allow the sauce to simmer in moderate heat for about 15 minutes until it is tied and removed from the fire. Allow to cool and then stir in the egg whites.

For bessamel, melt the butter in a small saucepan, and when it’s foam, stir the flour until it starts to brown. Remove the pot from the heat and stir the milk. Put salt and pepper, sprinkle a pinch of nutmeg, return the pot to the heat and continue to stir the mixture until it cools and coals. Add, always while stirring, egg with yolks and grated cheese and remove the pot from the fire. Preheat the oven to 180 ° C.

In the meantime, boil the spaghetti in a lot of salted water and, when softened, drain them. Return them to the pot and stir in the butter and half the cheese. Butter a large baking dish and put half pasta in it. Spread over the sauce with minced meat and then spread over the beiamel. Scrape the remaining grated cheese and a little oregano over the top and bake the pastitsio in the oven for about 1 hour until the surface is well brown. Allow them to sit for at least 15 minutes before serving them. 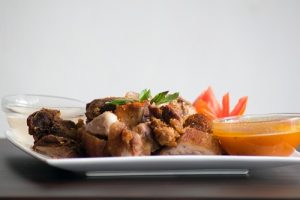 Either cut the coriander seeds into the mortar until they break, but without let them become dust, or break them into the blender with interrupted motor movements.

The previous night put the meat in a non-metallic bowl and stir in 2/3 of the coriander.

Pour it over with wine, cover the pan and keep it in the fridge, stirring the meat 1-2 times.

Before you start the Afelia, about ½ hour, remove the pan from the refrigerator to get room temperature.

Heat the oil in a saucepan and cook in the onion to wither and start becoming brown.

Put the meat and all the marinade in and let it boil.

Salt it, lower the heat, cover the pot and let it simmer for about 45-60 minutes until almost all of its wine evaporates.

Stir in the remaining coriander, allow to boil for a few more minutes and serve.