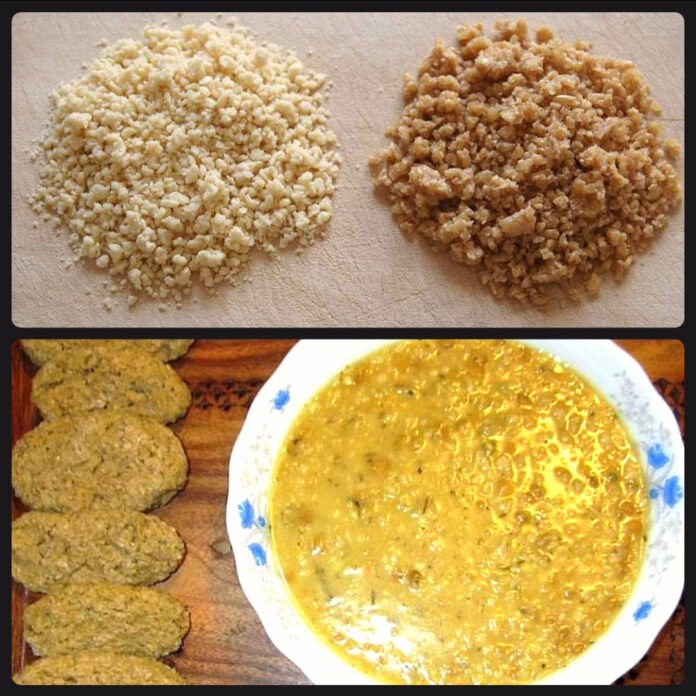 “Trahanas” is a dry product of wheat (konari) that is fermented together with sour sheep or even raw milk.

It’s a pasta made from flour and milk and has a grainy and irregular shape. The grains are about 2-3 mm in diameter.

It is available in different varieties: sour and sweet, thick and thin.

For the preparation of trachana, goat’s milk that has been left to sour or yogurt is usually used and mixed together with ground wheat and boiled until it becomes a thick mixture.

Produced during the summer months.

Trahanas is also called the soup that is prepared by boiling this dry product in water.

The sour trahanas is fermented with yogurt.

After the trahanas cools, it is molded into shapes and left to dry in the sun.

During the preparation of trahana, the last stage is its drying. To do this the trachanas is spread so that it has the maximum possible surface. This process, the spreading of trachanas, has remained as a popular expression, referring to someone who is typically late. Trachanas is cooked as a soup either with enough water or thicker.

The cooking time of trahana is usually short, about 15-20 minutes. Sometimes it is cooked with tomatoes.

In Cyprus, trahanas is made from finely ground wheat (also called konari in the Cypriot dialect) and is kneaded in a cylindrical shape with a diameter of about less than one centimeter and “spread” in the sun to dry.

It is also made in soup, usually thicker than other soups.

No tomato is used, but egg-lemon and usually contains some kind of meat.