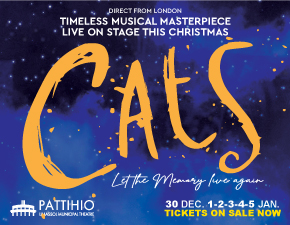 Andrew Lloyd Webber’s timeless musical masterpiece CATS comes to Cyprus for 1 week only this Christmas. Direct from London with an all star company of singers and dancers, performances will be accompanied live by The West End Theatre Orchestra.

Enter the enchanting and magical world of CATS, live on stage, with breathtaking choreography, acrobatic circus performances, spectacular costumes and immersive scenery that takes over the stage and auditorium of Limassol’s Pattihio Theatre like never before.

From the irrepressible Rum Tum Tugger to the magical Mr Mistoffelees, Skimbleshanks the Railway Cat, the scheming Macavity and of course Grizabella the Glamour cat, the poems of TS Elliot become unforgettable songs with Andrew Lloyd Webber’s much-loved music.

First produced in London 1981, CATS played for 21 years in London’s West End and 18 years on Broadway. Productions continue to play to packed houses around the world. The show has been translated into over 15 different languages and is now filmed as a major movie.

Following the sell-out success of Mamma Mia and The Sound of Music, Limassol Pattihio Theatre is proud to present another major musical production direct from London.