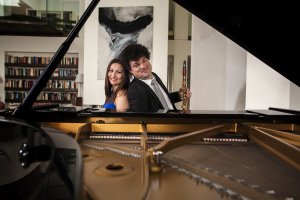 The Paphos Music Lovers Association Winter festival presents the concert ‘Clarinet Recital’ with George Georgiou on clarinet and Gergana Georgieva on piano, at Technopolis 20, on Thursday, 13th of December 2018, at 8pm. The programme will include works by Robert Schumann, solon Michailides, J.S. Bach, Leonardo Schiavo and Camille Saint – Saens.

Georgiou – Georgieva duo was formed in 2018 by Cypriot clarinetist George Georgiou and Bulgarian piano player Gergana Georgieva. The duo is based in Cyprus and it’s already appeared in several performances in Cyprus in venues such as the Cyprus Wine museum (Chamber Music Series 2018) and Technopolis20 series. Future engagements include a recital at the prestigious pharos Trust and at the A.G. Leventis Gallery.

Entrance: €12 with proceeds to the Paphos Music Lovers Association fund to support local arts projects.
Reservations are necessary at 70002420 (calls only).
Sponsor: CTO