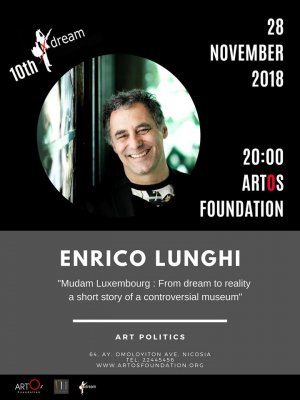 “Mudam Luxembourg : From dream to reality a short story of a controversial museum”

“In the context of rapid internationalization through the expansion of the european Union and the development of its financial sector, the government of Luxembourg set in 1989 to create a contemporary art museum. A dream appeared to become reality for people who desired to get closer to the heart of art however the (mostly unspoken) political agenda rather aimed to polish the international image of the state, attract investors and have a place to show off. After 17 years of polemics the Musée d’art moderne (no explanation was given for the change of name) finally opened in July 2006. nevertheless, the first decade of its opening nourished the dream of an innovative and creative institution, while in its recent developments the political agenda starts prevailing.”

Enrico Lunghi studied art history and history at the University of Strasbourg. From 1991 until 1995 he was assistant at the national museum of history and art in Luxembourg. In 1996 he cofounded, with Jo Kox, the Casino Luxembourg-Forum d’art contemporain of which he was the artistic director until 2008. From 2009 to 2016 he was general director of Mudam. He was curator for Luxembourg at the Venice biennial in 1995 (Bert Theis, Potemkin Lock), in 1999 (Simone Decker, chewing and folding projects) and 2007 (Jill Mercedes, Endless Lust). From 2005 until 2011 he was president of IKT (International association of curators of contemporary art). he works now at the Ministry of Education (SCRIPT) and at the University of Luxembourg.