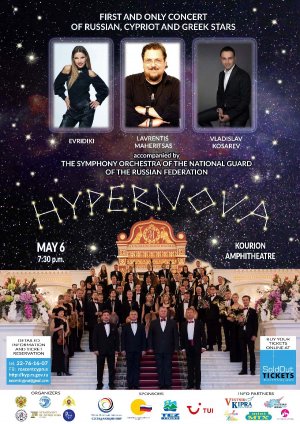 An unforgettable concert with the participation of Russian, Greek and Cypriot stars accompanied by the Exemplary Orchestra of the National Guard of the Russian Federation.

On May 6, the hypernova creative constellation will be born in the Kourion Amphitheatre. The concert will gather a galaxy of modern stars from Russia, Greece and Cyprus.

For the audience will perform:

– the baritone Vladislav Kosarev, a regular participant of concerts on the central channels of Russian TV, who captivates with its colorful, always different, deep, rich voice, sparkling temperament, and the most diverse repertoire.

– the tenor Yevgeny Shapin, who for many years reinforced the glory of the Bolshoi Theatre and the Berlin State Opera.

– Tatiana Sorokina, soloist of Moskontsert, performing with great success at the best concert venues in Moscow.

– the “Liubava” choir of the Russian Cultural Centre, winner of the Cyprus version of the show “The Voice”.

The entire concert will take place in live accompaniment of the Exemplary Symphony Orchestra of the National Guard troops of the Russian Federation consisting of 80 musicians.

This will be an unforgettable show, with unexpected duets, many impressions, and surprises!