Just Give Me The Pills – Koraly Dimitriadis (Poetry) 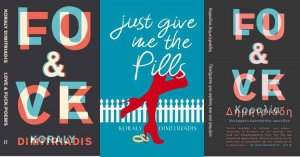 Join Cypriot-Australian poet Koraly Dimitriadis for an evening of hard-hitting and controversial poetry which will include very new material as well as her classics. The night will also be the international launch of her next poetry book, Just Give Me The Pills 18th of October at Vinylio wine etc 20:30

In a large, white-picket dream, a married mother selfishly cries. She has everything she ever wanted – a husband, a house, a business degree, a baby – she is at the pinnacle of the migrant dream. Perhaps she needs to return to her medication, the pills she stopped taking to become pregnant. She was taking them for six years. She wasn’t allowed to move out of home so she married at twenty-two. Now she is thirty, and it’s as if she is looking at her life for the very first time. She is starting to see things. The creativity she had kept buried inside all her life birthed out with her daughter, and now her words are taking on a life of their own.

From the author of the Australian poetry bestseller, Love and F–k Poems, Just Give Me The Pills is yet another brilliant novel-in-verse. It is a story of repression. It is a story of being silenced, and the terror of realising all the choices you’ve ever made are those you were expected to make, and you have no idea who you really are. It is a story of liberation, of rebuilding and finding one’s true self.

Books will be available for purchase on the night !!!

Koraly Dimitriadis is a writer and performer from Australia born to Cypriot migrants. She is the author of Love and F—k Poems which was also translated into Greek as Ποιήματα για Αγάπη και για Γαμήσι. Koraly’s forthcoming poetry book, Just Give Me The Pills, will be officially launched internationally in Cyprus at the end of October. Both of her poetry books form the basis of her theatre show KORALY: “I say the wrong things all the time” which was directed by Cypriot director Olga Aristodemou and premiered at Melbourne’s La Mama Theatre. Koraly also directed, produced, wrote and acted in four short films of her poems funded by Australia Council called The Good Greek Girl Film Project. Koraly is also near completing her debut fiction novel Divided Island, a love story set in both Melbourne in Cyprus. www.koralydimitriadis.com