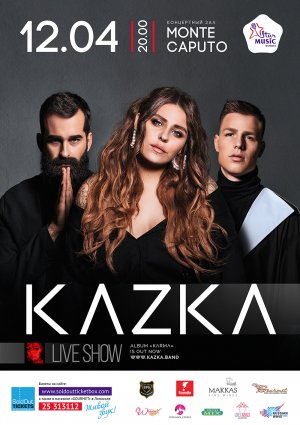 Kazka (from Ukrainian казка (kazka) – fairy tale) is a musical band that performs pop with elements of electro-folk. From the moment of creation in 2017 vocalist Sasha, sopilka player Dmytro and multi-instrumentalist Mykyta have already become Ukrainian sensation, “breakthrough of the year”; the first Ukrainian-speaking band to hit the world famous chart SHAZAM; a record holder among domestic artists on YouTube. The band has headed musical ratings in a dozen countries, including Ukraine, Latvia, Bulgaria, Armenia, Kazakhstan, Uzbekistan, Belarus, Russia, Colombia, and more.

In Cyprus the band will give a single live performance at monte Caputo in Limassol on Friday, 12th of April.