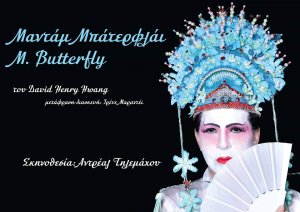 Anemona Theater presets M. Butterfly, a play by David Henry Hwang. The story, while entwined with that of the opera Madama Butterfly, is based most directly on the relationship between French diplomat Bernard Boursicot and Shi I. M. Pei Pu, a peking opera singer.

Shamed and imprisoned, 65-year-old Rene Gallimard contemplates the events that led to a shocking and embarrassing international scandal. While working for the French embassy in China, Rene fell in love with a beautiful Chinese performing artist. For over twenty years, they carried on a sexual relationship, and over the decades, the performer stole secrets on behalf of the Chinese communist party. However here’s the shocking part: the performing artist was a female impersonator, and Gallimard claimed that he never knew he had been living with a man all those years. How could the Frenchman maintain a sexual relationship for over two decades without learning the truth?