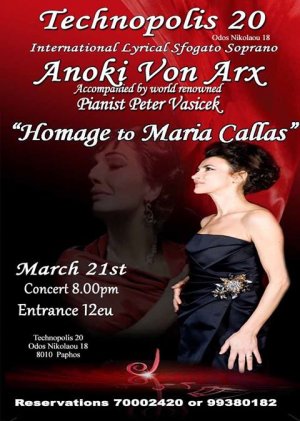 The rare soprano sfogato Anoki Von Arx from Austria, that her voice covers the entire spectrum from high and dramatic soprano to mezzo, like Maria Calla’s voice, along with the Chech pianist Petr Vašíček present a tribute to Maria Callas, at Technopolis 20, on Thursday, 21st of March, at 8pm.

The couple will present a music story, with famous arias from Calla’s career. Anoki Von Arx brings a unique element to the Opera. Before performing each aria Anoki enchants the audience with the story of the musical piece, and the Opera from which it originates. Bringing the characters in her tale to life, the audience can’t fail however to be mesmerized by her beautiful voice and magical performance. The 2 musicians have previously collaborated, in Paris, on this Maria Callas homage.