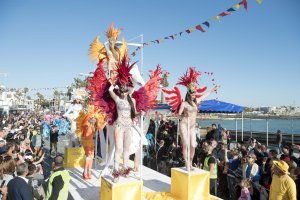 Carnival events will take place in Paphos from the 20th until the 29th of February.

Entrance of the King and Queen of the Carnival on the theme: “Carnival in Cuban Rhythms” starting from G. Digenis Avenue and finishing at Kennedy Square. A concert by Tonis Sfinos will follow at 19:00.

The grand carnival parade will be held along Poseidonos Avenue which runs parallel to the seafront in Kato Paphos starting at 3pm. Floats will assemble at Almyra hotel and the parade will conclude at the car park of the archaeological park.

Along with the participation of dozens of floats, the Pafos municipal band, cheerleaders and other musical groups, thousands of locals and visitors are expected to attend and participate.