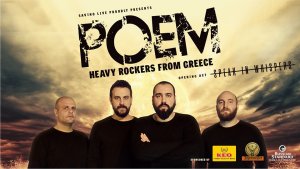 They have released 3 albums so far:
2018 – “Unique”,
2016 – “Skein Syndrome”
2009 – “the great secret show”
All have received excellent reviews from fans, webzines and magazines from all over the world.

They have shared the stage with Opeth, Ozzy Osbourne, Pain of Salvation, Paradise Lost, Burst, Mekong Delta, Cilice, Rotting Christ, Leprous, Katatonia, Gojira, The Gathering, among others and we have also participated in numerous festivals in Greece and other European countries.
The next album is expected to be released in Feb of 2020.