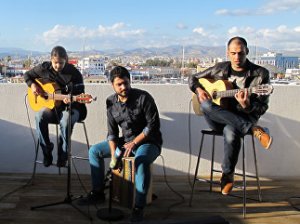 Rumba Attack is a Cyprus-based group performing original instrumental material in their distinctive Flamenco- Rumba style, blended with sounds from Middle Eastern origins, Rock and Bossanova. During their live shows they regularly feature guests including vocals, cretan lyra, trumpet, ute, saxophone and various percussion, and they have collaborated with local dance schools.