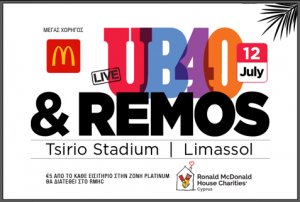 UB40, who have received 4 Grammy Award nominations and sold more than 70 million records worldwide, will perform their greatest hits including, “Red Red Wine”, “Here I Am” and many more. They will be joined on stage by Antonis Remos, one of Greece’s greatest performing artists, who has continuously topped the music charts in Greece over his 25 year career.

Five euro from every Platinum ticket will go to the Ronald Mc Donald House Charities (RMHC).