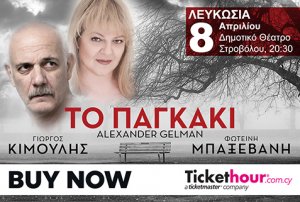 Alexander Gelman, one of the foremost important playwrights of his time, wrote the Bench in 1983. Since then it’s been translated and played in thirty countries and it keeps being played, because of its profound human angle but also to its bitter humour that renders it timeless and up to date during a tragicomic way.

It was written in the Soviet Union of the eighties, the period before its fall, when arbitrage and corruption prevail. The society is at an impasse as well as its people. They dream of another life in different places, somehow differently. They get away to different worlds, to different people’s lives, they create fictional stories, they evade a suffocating and intolerable routine, claiming for an efflorescence.

It’s a tragicomic story of 2 lonely people. One day in some unspecified time within the future they find each other in the public park. He and she bring on stage the most vivid, the most prolific of the themes, Love. They walk together the route from lie to truth. A route in which lie is confused with the need for private freedom, free reflection, ideas. A route that in some moments lie is being the only truth.

They suffer and practise the everlasting game of duel between man and woman that either shall bring them closer or shall signify their movement towards loneliness.
Both of them look for a new start, although they already know it’s made long ago…

A story that might take place in every public park, in every country.