The Day They Kidnapped the Pope (Theater) 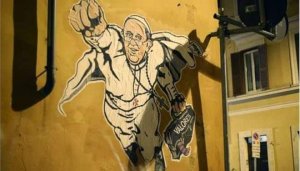 The theater group “12 Kai Kati” presents the comedy “The Day They Kidnapped the Pope” by Joao Bethencourt, adapted and directed by Vasilis Hatzistillis.

This startling comedy has proven a smash hit in Europe with major productions in Germany, France, Spain and Holland. When it was presented in Rome, the Vatican newspaper gave it a rave review. The improbable events become momentarily believable in the magic of the theatre. On a visit to New York, the Pope comes out of St. Patrick’s Cathedral and, confused by a thunderstorm, gets into a taxi. The driver, Sam Leibowitz, kidnaps him and takes him to his Brooklyn apartment where he holds him for a special ransom—a day of world peace. The Leibowitz family is stunned by this act and Sam’s bewildered wife fixes a lunch, saying, “Call the children; call the Pope.”